I've barely gotten caught up after last weekend's trip to Rhinebeck, and now the last of my Yarn Trifecta weekends beckons: Stitches East. For the first time, Stitches East will be held in Baltimore. I'm looking forward to the change: even though it's less convenient (it was entirely possible to go back and forth to Atlantic City from Philadelphia in the same day), Atlantic City just wasn't my cup of tea. I'm not a gambler, and casinos don't do anything for me, so holding Stitches there was not particularly desirable from my viewpoint.

I've spent most of the past few weeks dyeing up a storm. I'll be bringing some batches of Black Bunny Yarn to the Rosie's Yarn Cellar booth. I've got laceweight, I've got DK weight and I've got some bulky -- and if all goes well, I'll have some roving batches, too. I'll be at the Rosie's booth Friday through Sunday, so if you're going to Stitches, please stop by and introduce yourself. I love to meet you guys. Lisa always brings Koigu and Anne and other goodies, and I think some new RosieKnits patterns will be debuting.

In other news, Halloween is nearly here. Friday, the twins' preschool went to visit a nursing home to have a little party for the residents. Here're the twins in their costumes: 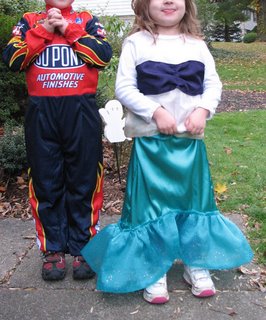 The Little Mermaid and a Nascar driver (Jeff Gordon, to be precise, but N. doesn't know individual drivers; he's more into the cars than anything else). It's tough cropping out their adorable faces, but you get the idea...

My oldest wants to be....Charcoal. Since he's tall for his age, I'm finishing up a rather large black bunny costume. Black pompom on the butt, anyone? And let's keep our fingers crossed the other third-graders -- dressed as Eagles quarterbacks and superheroes and Darth Vader -- don't beat the crap out of him at recess.

Inspired by Marilyn, I spun up a small (3 ounce) batch of roving that I picked up at Rhinebeck from Tintagel Farm. It's half wool and half mohair. 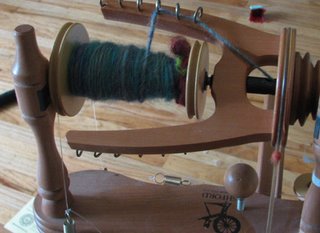 I'm a sucker for blues like this (which didn't reproduce well at all in my photo: they are much brighter, turquoise-y with some green and some purple), and it spun up quickly and pretty easily. I'd never done mohair before, and while it's a bit clumpy, the blend was pretty much pre-drafted and ready to spin. After watching Marilyn's technique at Rhinebeck, I felt a bit more confident in my spinning. (I'm a self-taught spinner.) Marilyn gave me some of the best advice I've ever gotten about spinning: she said to spin a little every day, no matter what, and the quality of my yarn was bound to improve. She's right. Oddly, I also find that if I temporarily stop spinning for a while (weeks or even months), when I pick it up again, I seem to find it easier. Maybe my brain is processing the motor skills, but it does seem to work that way. I should be able to use this yarn as singles rather than having to ply to even out the variations in thickness.

My last few posts took a lot out of me, so I may be on the quiet side for the next week or so. Although photography is forbidden at Stitches, I'll be sure to fill you in on all the dirt when I get back.
Posted by Carol at 8:53 AM

The costumes look great. Can't wait to see the Charcoal costume. Halloween is so much fun.
The spinning looks great, too. Marilyn's right. When I was learning, someone told me to try to spin for 10 or 15 min. everyday. Then, before you know it, you're spinning without even realizing it. BTW, mohair blends are my favorite ;-).

Prestige pricing is not new and is not an anti-trust issue. If you buy a diamond ring in the blue box, you know you have paid more than if you were to buy the identical ring elsewhere. The RL polo example is just this--they want the product to be percieved as something worthy of the extra cost.

I think more important in this discussion for us yarn buyers is this--it costs money to run a LYS. Things like rug shampoo, knowledgeable employees, fixtures to hold the yarn, processing of inventory so it can be shelved and sold, etc. This is true of ALL types of retail. Next time you think you are hurting only some big corporation by buying something "cheaper" understand you are hurting your local small biz. When all the small biz folks close their doors, watch those fire sale prices at the big box go up. This to is Retail 101 and never fails to happen.

We have nearly unlimited choices as to where we spend our dollars. It isn't only about price--it is about service, quality, and the life of our cities and towns. Don't be ecnomiclly indifferent to the power you have to make a difference. Understand your choice--whatever it may be--is a vote on many more things than simply what your next knitting project is.

Oh and one more thing--teach your kids about this stuff. Kids--yes little ones and teens--control billions of dollars in retail revenue these days. Teach them to be good consumers--understand what is advertising and what is editorial content; what profits are; the difference between a RL polo and a no-name polo made in the same factory, by the same people, from the same pattern and where the price difference comes from (branding, advertising, and often fabric quality are the only differences). We give them the money to spend or the power to choose, we should make sure they understand it.

Cute costumes! I'm sure "Charcoal" will look great, too.

Baltimore is about a 2-hour drive, BTW - we go for the day pretty frequently, as two of my nieces live there. As a matter of fact, we were just there for one of their weddings this past weekend ... and I'm going back for Stitches this weekend ... good thing I like Baltimore!

Have fun at Stitches, but unless they've done some MAJOR urban renewal, don't stray too far from the Inner Harbor/Convention Center area. Seriously.

And tsk for putting worsted weight merino up on the Black Bunny site so soon after Rhinebeck. It looks like it'd mesh really well with the "cornflower" colorway I got back in the Spring. I suppose I'll have to be patient and see if anyone else snatches it up first.

Have fun at Stitches East! After the Midwest version, I figured that I didn't need to do another one this year. Besides, by the time I decided that I might be interested in going, all the classes that I wanted to take were sold out, which made my decision that much easier. I also didn't realize it was so soon after Rhinebeck. How do you find the energy?

The exact same thing happens to me with my spindle spinning. If I take a break I'm way better the next time I pick it up again. Weird!!

Ah, fond memories of you acting as my ringer when I was taking pictures for the Gallery of Ghastlies. I'm almost inclined to go, just to see what I could get on my cell phone camera. Heh. But I really can't afford to go after Rhinebeck, nor do I want to put money into the X-men's pockets, particularly.

Your spinning is much improved! It looks a lot more consistent, to me. You're right about the color--the picture doesn't do it justice. I have another 3 lb. bag of Tintagel Farm stuff stowed away. I enjoy spinning it.

I got some of that Tintagel roving last year. Possibly the same colourway (Caribbean?). I spun most of it on a spindle and learned a lot. I really liked it. As did Tigger (who got to spin a bit, too).

Just delurking to say hello! I'm a knitter in South Jersey (Cherry Hill), and I had no idea you lived and posted from Philly! I really enjoy your blog, especially your last few posts on the hypotheitcal and alleged saga. I'm a law student, so I particularly appreciated your legal perspective on things. Happy knitting!

It was great to meet you in Rhinebeck. Enjoy Stitches!

Cool! I didn't get to meet you at Rhinebeck, so I'll definitely look for you this weekend! I'll be signing books at The Elegant Ewe's booth Fri-Sun and trying not to spend any money.

Hope to see you there!