I only got through one book in February -- and I just squeaked it in, finishing it last night. (When my Lyme acts up and I go to sleep at 9 p.m. every night, it's hard to get a lot of reading done. And let's not even talk about knitting.)

As Nature Made Him: The Boy Who Was Raised as a Girl

, which was very kindly sent to me by a faithful reader and test knitter (thanks, Carol!) was heartbreaking, fascinating and infuriating. The subject of the book, David Reimer, suffered a horrible accident as a baby that resulted in a penisectomy. Under the guidance of a Svengali-like psychiatrist at Johns Hopkins, his well-meaning parents had doctors perform a rudimentary sex-change operation and raised him as a girl. David's childhood was every bit as miserable as you might expect, and at age 14, when he learned for the first time what had happened to him, he resolved to switch back and live the remainder of his life as a boy. What is particularly infuriating is that the doctor who spearheaded the course of treatment apparently did not communicate to the parents that this was basically an experimental course of treatment and that the doctor's own scientific "methods" left a whole lot to be desired. In fact, even though Reimer's case could not be considered a success by any standard, the doctor continued to portray it as such, likely leading to more ill-fated surgeries on babies with damaged or ambiguous genitals.

Here's a sneak peek at tomorrow's Etsy update. I've got some rovings and a lot of superwash merino sock yarn, as well as a couple of wool/nylon sock yarns. 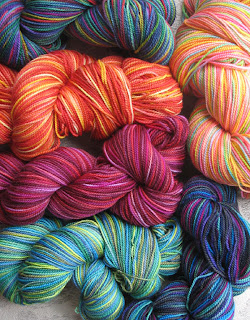 I'm updating in the morning, so get ready to hit that refresh button.
Posted by Carol at 9:20 AM

I'm ready for a new book. I just finished Devil in the White City and need something else STAT! Any recommendations?

That does sound like a heartbreaker- and the whole idea just a disaster waiting to happen. Will go on the must-read list, but in the "when I'm ready for something heavy" section.
Pretty, pretty sock yarns- want them all.

Glad you enjoyed the book!

Mindy - you do have them all! But I'll be waiting for the update tomorrow. Bwwhhaaaaahaaa

On the advice of people who are nicer than I am (ahemselmaahem), I have realized that perhaps that whatnottocrochet comment from the previous post was not as ugly as I first perceived it.
I apologize for being so mean, bitter, fill in whatever adjectival phrase you wish.

Though I do still distrust the anonymaous zinger.

And the crap typist as well.

Putting on my doctor hat, the correct term would be "penectomy". "Penile amputation" is also acceptable. I've heard the David Reimer story before - very sad, and enfuriating that so many MD's feel they have the right to play God.

Lovely yarns. I expect they'll be well picked over by the time I get a chance to look at them, though, particularly since we're driving to my grandmother's for a couple days. I suppose the enforced restraint is good for me, though. *sigh*

I love the yarns. They are absolutely Gorgeous!

There is an Iain Banks novel that deals with something similar. I think it is Wasp Factory though the descriptions on Amazon don't ring any bells. But if I'm right it is a very good fictional treatment of similar issues.

Sad story for sure. Glad you threw in some great yarn to brighten up the post. Very interesting what goes on on this old planet huh?

If you are ever looking for something fictional to read on this topic, there is Middlesex by Jeffrey Eugenides, which won the 2003 Pulitzer for fiction, and Trans-Sister Radio by Chris Bojalian. Both are excellent, although the second is a lot more readable, imho.

David Reimer committed suicide a few years ago, after the breakup of his marriage. His was a very, very sad story.