In honor of spring, I present the maypole: 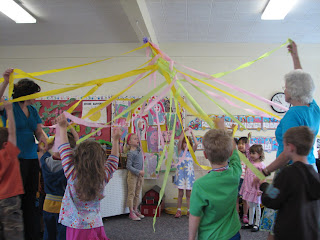 courtesy of the twins' preschool.

I have been informed that there'll be a knitblogger meetup at 1:00 p.m. on Saturday and Sunday in the grassy field next to the building where the Koigu donnybrook takes place. 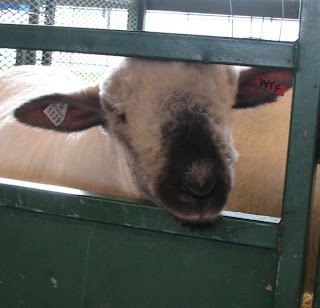 I'll stop but believe it or not, I find these gatherings overwhelming (especially since last year, no one had ever heard of my blog). So look for me and say hi.

1. The Dead Beat: Lost Souls, Lucky Stiffs, and the Perverse Pleasures of Obituaries

This was an amusing look at the world of obituary writers, including lots of hilarious quotes from classic obituaries. (It's way funnier than it sounds.)

2. Lone Wolf: Eric Rudolph: Murder, Myth, and the Pursuit of an American Outlaw

, an account of the investigation into Rudolph's bombings, the manhunt leading to his capture, and a pretty thoughtful look at his biography. What frightened me most about this book was the realization that there are some mighty scary, violent people out there whose view of the world and our country and what is and isn't moral is so vastly different from mine.
Posted by Carol at 11:08 AM

Well, that was LAST year...
Happy May Day back.

May Day is, er, was my Dad's birthday.

Oh, I like the sound of 'The Dead Beat'. But then I spent this morning in the local graveyard chuckling at some of the inscriptions. And wondering about the back-stories...

May-day merriment to you and yours and here's hoping for a good summer for all.

Alas, I shall be missing MDSW once again. There's a chance I'll make it to Cummington, but the only sure deal this year is Rhinebeck. Unless I traipse off to India.

I look forward to meeting you - I very much enjoy your blog and your honest book reviews.

Dead Beat is a wonderful read. I love the art of the obituary - gleaning information regardless of whether it was intentional or not. The author was here in Philadelphia last year at Borders and was completely charming and engaging. We had a wonderful chat about Maureen Stapleton's obit in the NYTimes and how the writer just casually mentioned about her drinking which, for better or worse, was an integral part of the Stapleton folklore.

Have fun at MSW.

Just waving a hello (from my new laptop). Haven't been here in awhile because I was sans computer. Miss you! And Happy (belated) MayDay!