I have little kids, as well as a relatively robust sense of whimsy, so I naturally gravitate toward books that feature knitted (and crocheted, and sewn) toys. Today I've got some mini-reviews of four recent books devoted to cute little plush-filled anthropomorphic shmoos -- none of them knitted.
Our Japanese friends have kindly exported their own particular brand of cute in the form of Amigurumi. Wikipedia contains a handy definition for those who aren't familiar with the term "amigurumi": 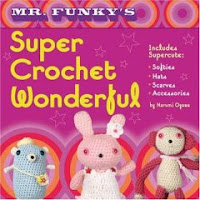 I mean, it's worth it just for the title alone. Mr. Funky is a paperback, about 112 pages, full color, and contains twenty-five or so patterns for crocheted animals and accessories (there are 25 separate patterns in the table of contents, but some of the patterns include directions for more than one item, so technically you're getting more than that). MSRP is $16.99; available through the link above for $11.55 at the time of this writing. About nine of Mr. Funky's patterns are for animals, all crocheted, including boy and girl elephants, a hamster, 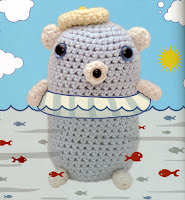 bears, a kitty and a striped snake. 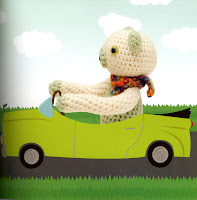 The remainder of the patterns are for accessories, which aren't, in my opinion, as cute as the animals: lots of hats, mittens, scarves and bags. 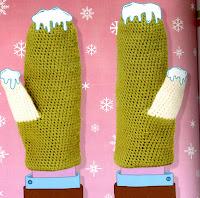 The book contains directions on how to assemble the animals, along with charts and lots of sketches to help you create some of the embellishments -- it's helpful stuff. The finished items are shown in photographs that are superimposed on illustrations, which gives a whimsical look to the book, but makes it a little hard to judge how the clothing items look on a real human.

Next we have Fun Dolls 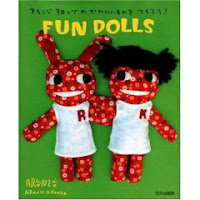 This is a paperback book, about 80 pages long, with patterns for making sewn dolls. Fun Dolls is a translation from the Japanese, containing 18 patterns for animals like the "Haha Bunnies" (they are "always laughing `Haha!' so they're called Haha Bunnies") 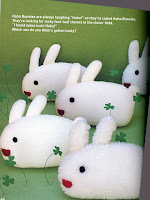 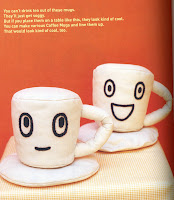 Instructions are given in comic-book form, and include less-than-actual-size patterns (you are instructed to enlarge them on a copying machine before pinning and cutting), detailed lists of materials, 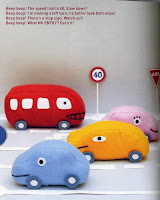 patterns for stamping and other embellishment, as well as close-up photographs of each doll. If you like Fun Dolls, there are other Aranzi Aronzo titles available, like The Cute Book

Next up is Plush You!: Lovable Misfit Toys to Sew and Stuff

by Kristen Rask (F&W Publications/North Light Books 2008), a paperback with over 140 pages. 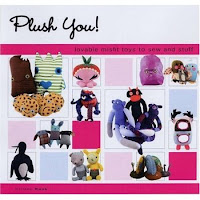 MSRP is $19.99 but it can be purchased for $13.59 by clicking on the link above. Plush You is chock-full of photographs of silly stuffed toys, and the variety is pretty amazing: the back cover claims that around 100 different plush toys are shown in the book. You certainly will find photos of all sorts of oddball dolls, from typical amigurumi animals 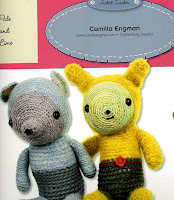 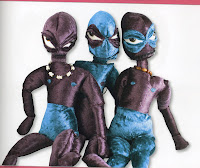 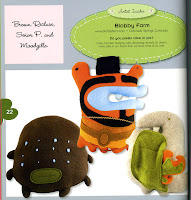 I wish the outside of the book had made this clearer. That's not to say I wouldn't have necessarily purchased it, but still.... In any event, the directions for these projects are less detailed than the previous two books; there are a few patterns to enlarge and use in the back, but the directions tend to be given in list form without diagrams or photographs. I did like the book's emphasis on the "counterculture" of plush creators, including miniprofiles and links to the designers, some artists' tips sprinkled throughout, and little blurbs describing the artist's favorite sources of inspiration and other background info (although I wish this could have been done in more depth).

Last but certainly not least, is Sock and Glove: Creating Charming Softy Friends from Cast-Off Socks and Gloves

by Miyako Kanamori (Penguin; 1st American Ed. 2007), which uses pre-existing socks and gloves (mostly commercially made, by the looks of them) to create adorable stuffed animals. 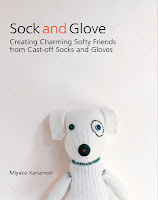 MSRP is $12.95 but the book can be found for $10.36 by clicking on the link. Sock and Glove manages to capture a somewhat different sensibility than the previous books, going for a more spare, less kawaii feel in mostly neutral colors, with suprisingly elegant photography and layouts. Sock and Glove contains instructions for fifteen dolls made from one or more gloves and socks, as well as a few pieces of clothing for them (also made from cast-off handgear and socks). 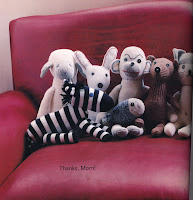 How about that sheep pupik?

To sum up, all four books contain ideas and inspiration for funky little stuffed creatures, some crocheted, some sewn, some using more than one method. They'd make great gifts for a crafter with an appreciation of offbeat plush, keeping in mind that Plush You is more in the nature of a coffee-table browser rather than instruction manual, which could cause frustration in those who like to follow patterns rather than riff.

A hamster pattern! You know that makes it a must have...

did you show charcoal those bunnies in "fun dolls"? hope he isn't having nightmares! (shudders at the thought)

I actually liked shmoos (google them, kids! from which comic strip did these creatures come?). the "candy corn doll" in "plush you" comes close.

the "zombies" are pretty kewl though! just enough edge for my warped brain...

did you happen to see this amigurumi on ravelry? and no, i'm not kidding...search:
Bobby Boner Amigurumi Penis
there was also a penis dressed up as a pimp, but i can't find that one now...i think she is selling them in her etsy shop.

Except for the Sock and Glove, I find all those plushies rather disturbing.
Are they made by people who like dressing up as plushies?

Hi Carol
I just read your hilariously acerbic Dolores-judging over at Franklin's and I just had to rush over here to the source!
Thank you for the book reviews : you had me at 'blobby farm' I think I would buy it just for those! I too have been churning out the softies for xmas and am suddenly appalled at my adherence to relative naturalism! I want to embrace abstract blobbies immediately