Kitteh-topia (or Bridget C. is a big, fat liar)

Luckily, Bridget had invited me over for lunch today. She had been threatening me via email bugging me sweetly inviting me for a while now, and we finally found a date that worked for both of us.

Bridget sets out a really nice lunch table: four (4!) kinds of cheese, homebaked bread (Tim rocks), and all sorts of other delicacies, including freshly-baked brownies. Also real ice tea with real lemon. And we laughed and had a great time, yada, yada, yada.

But I really went over for a dose of kitteh therapeh.

There's Tess, who's a little old lady (did you know that "senile felines" is a palindrome?): 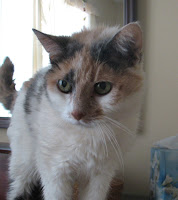 and friendly and playful Jetsam: 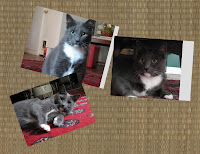 and then there's the matter of Garden Kitty. Now I think that the poor cat should have a real name instead of an adjective and a noun, but whatever. According to Bridget, this cat is terrified of strangers, hides under furniture when guests come, quakes and will never let new people pet him.

I don't know what kind of airplane glue Bridget's been sniffing, because this kitteh was perfectly sweet and friendly, and as you can see, quite willing to let me pet him and take his picture. 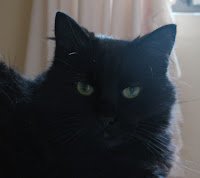 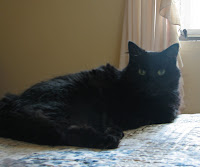 Does that look like a scared kitteh to you??
Posted by Carol at 5:57 PM

Labels: bridget, bridget's husband still hates me because he left 2 bags of crap in the living room, bridget's kittehs, kittehs

Ohhh- Tess is a dilute calico just like Itteh Bitteh Kitteh (who is growing out of itteh-bittehness quite well, thank you- you should see the scratches my hands and ankles bear). Sounds like a wonderful afternoon of kitty-indulgence, and you must bring out the best in garden kitty. How could you not, you kitteh lover/enabler you.

Traipsing off to read Bridget's blog now- you keep this up and I may never get to knit again...

You must have brought a bribe for GK, thus the photo session. Of course with the abscence of The Tim - you did have an advantage over my last visit to Chez Bridget.

GK and I have communicated via the telephonic instrument and he is quite, quite close with Edgar the Jihadic Lovebird. So I never feel insulted when his gaze passes over me with profound disinterest (and fear, let us not forget fear) as I know, deep, what is in his heart.

Oh please - of course you left out the part where you arrived having bathed in tuna oil!

Jetsam spent a lot of time looking for you after you left yesterday - no one has played with him that continuously in a while.

Someday maybe I'll meet you and Bridget in person...
(but tuna oil? nope)