After arriving home from Franklin's booksigning at Loop Friday night, I could barely sleep, I was so vibrating with excitement. The day had been a whirlwind of activity: the airport run (I saw a hilarious sticker on the escalator that said "God has a plan -- to kill me."), a quick stop at the house to drop off his things (Franklin's, not God's), we hit the elementary school for a sneek peak of Elvis' debut in the school musical: 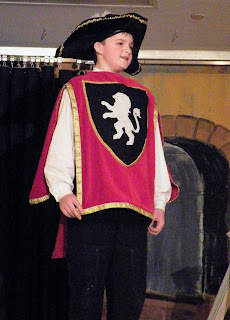 we grabbed a late lunch and then it was off to Loop.

Not surprisingly, people turned out in droves to meet Franklin (or see him again, as the case may be), including the fearless Anne Marie and the lovely button creator Regina, 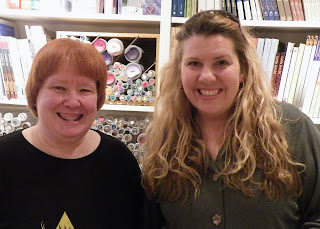 and then Regina (hmm, can it be that Regina is a ham? well, if my hair were that pretty, I would be too) posed with His Nibs himself: 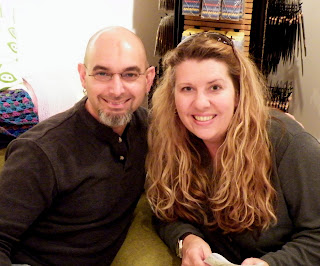 A Franklin fangrrl came wearing this beautiful Bohus sweater (from a kit direct from Sweden): 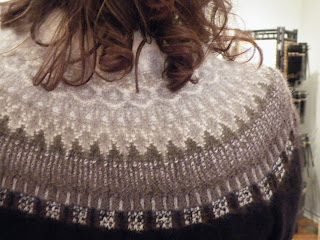 I was thrilled to meet meet blogreaders Kim and Mary Ellen (thanks for introducing yourself! comment once in a while, willya?) and I was also very excited to meet Heather Ross, author of Weekend Knitting, who was appearing next door at Spool. While there, I got to meet the famous (and infamous) Jay McCarroll of Project Runway fame, who grew up just a few miles from where I did, and I had the great fortune of going out to dinner after the signing with Heather, and her publicist, and Craig, and pals Laura G. and Jim, and Craig's delightful partner Mark, and Spool co-owner Laura, and the charming Tom (not my Tom, though, another charming Tom).

Now, Heather is one of those people who would fill me with an inferiority complex (she's gorgeous! she's blonde! she's talented! she's funny! she is an excellent raconteur! she's taped a Martha Stewart episode!) except she's so nice and warm that she makes you feel right at home. I also became very fond of her sidekick Leslie (how'd that booty call go, Leslie?) who was also funny and smart and fun. So thanks to Craig for inviting me along and for bringing Franklin to Philadelphia. 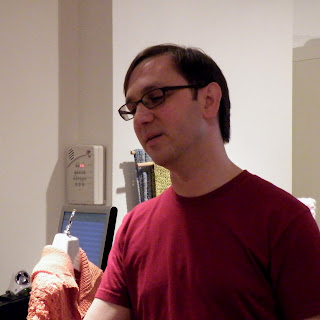 I had barely dropped Franklin off at Loop so he could teach his lace class, when I had to rush back home to prepare to attend the last two performances of Cinderella (the Rodgers & Hammerstein production), with Elvis as the Herald. It was astonishing that a bunch of nine-, ten- and eleven-year olds could put on such a wonderful show. 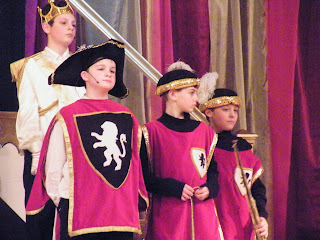 (I'm very proud of those three red costumes on the right, above -- I made them!) 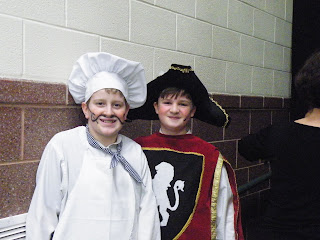 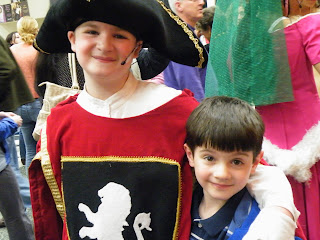 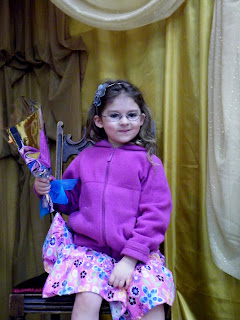 were very proud, too. (Would Miss Thang give up the chance to assume what she views as her rightful place, i.e., a throne?)

It was a busy and extremely fun weekend, and it was a nice break from my frantic knitting-on-a-deadline. Come back soon, Franklin! Your Philly fans miss you already!
Posted by Carol at 7:59 AM

Wow! It sounds like you had a jam packed weekend! The kids are too cute in their costumes. But I have to give it up to the princess. Claim that throne!

man, I would not be surprised if you collapsed on monday after the weekend YOU had!

thanks for the shout-out! and for posting cute kidlet pix!

Whew- I'm out of breath just reading about it! Sounds like a fantastic whirlwind.

Elvis looks great- you did a fantastic jobs on those costumes. Gotta say- she does look like she belongs there...

What a great sounding weekend - and way to go, Elvis!

I wish I had been able to make the booksigning on Friday night. But alas, I was still in prison.