It doesn't seem that long ago that my nephew was born. But it's been over 18 years, because he graduated from high school in June. I went up to northeast PA this weekend to attend his graduation party. Has it been that long since he looked like this? 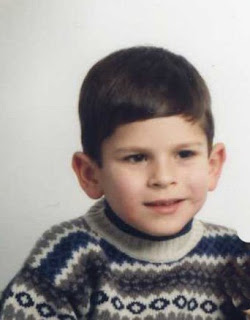 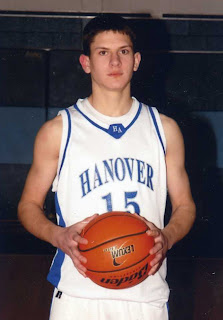 He'll be attending Shippensburg University this fall on a baseball scholarship, so I'm looking forward to following his college ball-playing career and sending him care packages.

I had a good visit with my family. My mom was very happy to see her grandkids, and even my father mustered up a bit of grandfatherly elan: 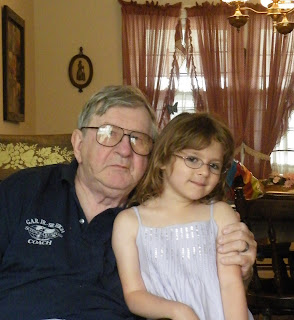 (That's as good as it gets, gentle readers. And I cropped out the unbuckled pants and the beer belly just for youse.)

My brother was in that I-just-spent-the-last-week-getting-ready-for-this-party-in-my-backyard-and-now-I'm-too-exhausted-to-enjoy-it mode, but rallied in order to tend bar: 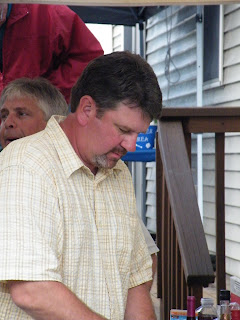 My sister-in-law had built a minishrine in honor of my nephew (that is the graduate himself looking at it): Little Miss, who always feels pretty, posed with one of my namesakes, my aunt Carol: 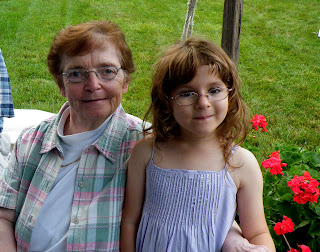 and Tom, who also always feels pretty, posed with my other namesake, my aunt Jean: 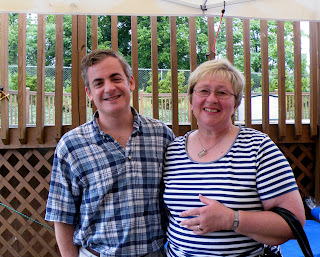 I consumed halushki and golombki (sp?) but, alas, no kielbasi. I had some lovely catching up with my brother's high school pals and although they may have been lying through their teeth, it was still nice to hear people tell me I don't look my age.

One thing that freaks me out about these parties is that I keenly feel the loss of some of my relatives who have passed away. When I was a kid, my family went to parties that were full of my extended family (mainly on my dad's side, but occasionally on my mom's, too) several times a year. There was always somebody getting married, or celebrating their First Communion or Confirmation, or graduating from high school, and if there wasn't any official occasion, sometimes someone would just throw a party for Memorial Day for the hell of it. There was always an old guard of Polacks sitting at a card table playing pinochle, grabbing kids as they walked by to give them an empty beer pitcher and to tell the "little bastards" to go fill it. My grandmother -- if she weren't reneging at cards -- would be predicting her imminent demise or making obscene hand gestures in order to discourage anyone from taking her photo. Stories would be swapped, photos examined, tons of food and beer would be consumed.

Alas, the old guard is now gone. My grandmother was one of the last to go; but before her, cousin Bertha, great-uncle Frank (Tom always says that if you can't remember one of my male relative's names, try "Frank" -- you at least have a 50-50 shot of getting it right), my cousin Francie (people used to comment on her voluminous chest, but that was only because God had to make enough room for her gigantic heart), and more recently, my great-aunt Josephine, a.k.a. Cioci Joe. In some ways, it just doesn't seem right to be at a family party with so many of the old guard gone.

Granted, there are new family members to smile at, like my adorable cousin (first cousin once removed, I think) Brock: 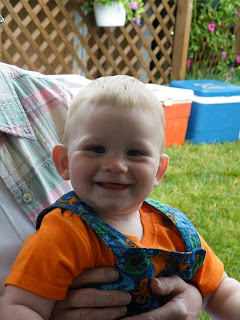 At least Hildy is still with us, and in fine form, she managed to honor the old guard in the manner which they would have found most meaningful: 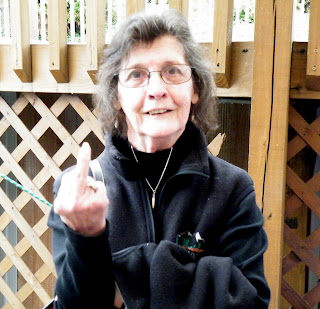 I remember being at my Grandmother's funeral several years ago, and hearing my mother day to my father, "Do you realize this makes us the old folks now?"

Yup, that's *your* relative, all right. Ha! Good looking crop of youngsters you have there, too.

That is a great post about your family. I love it!

Right on, Hildy! Looks like a great time- the shrine cracked me up. Mom's not too proud, huh?

What a heart-warming read. Good to the last drop.

I really enjoyed this post. Funny how when you are an adult, the relatives who are gone are the ones you think about, even if you weren't that close with them.

Though in my family, the crazy is still there, so it's a little easier to take ...

thanks for cropping out the beer belly and unbuckled pants! LOL

congrats to the graduate!

Your family sounds a lot like my family (except we're Germans so we played Euchre, not pinochle). What a wonderful, loving post.

Hildy looks just like Aunt Lil, even the finger is the same.
Halushki? with dill? and you didn't invite me!
With us it was poker. Even the kids. They said it taught us about numbers and the value of money.