I grew up in a small city in northeastern Pennsylvania. For many years, Wilkes-Barre's major industry was coal mining. It was a dangerous job and if you survived 'til retirement age, you had only a slow, choking death from black lung disease to look forward to. Since the mines consumed the lives of so many men, there was a constant stream of immigrants entering the Wyoming Valley to keep the anthracite flowing.

Most of the immigrants came from Europe. As disaster struck a particular country, hundreds of of its poorest citizens would come to the Wyoming Valley looking for mining jobs. Irishmen, Italians, Poles, Russians, Germans, Czechs, Lithuanians, and many other countries sent huddled masses yearning to breathe free. Immigrants tended to stick together, so that all of the men from one village or region would live in the same neighborhood, maintaining as much of their home culture as they could.

When I grew up in the 1960s and 70s, ethnicity was still felt very strongly in Wilkes-Barre. Kids would ask each other "What are you?" meaning "From which poor European country did your ancestors come?" and the answer would be "Polish!" "Italian!" "Irish!" "Lithuanian" or whatever it happened to be (except for my high school calculus teacher Miss Owens, who if she heard someone ask "What are you" would snap "You're American!"). There was an immediacy and an importance to one's ethnic identity that probably came from being second- or third-generation Americans in a geographically insular place.

My father had a keen sense of his Polishness and even though he had a smidge of German blood in him, he always identified himself as a Polish-American. He was always very proud of his Polish heritage and never hesitated to tell people about the famous Poles who'd contributed to society: Copernicus, Kosciusko, Madame Curie, Chopin. (We were probably the only people on our block to have a framed photograph of Copernicus in our basement rec room. I am not joking.) My mom, whose father's family was Lithuanian, and whose mother's family was a mishmash of things, having not been part of the coal-miner-immigrant waves of the late 19th and early 20th centuries, never seemed to care that much about what she was, although she could tell you she was Pennsylvania Dutch, English and French, as well as Lithuanian. So when my brother and I were asked "What are you?" we usually answered "Polish." When people would go all faux-Irish on St. Patrick's Day and ask me why I wasn't wearing green, I'd say "Because I'm not Irish."

Except now I'm not so sure.

When I started tracing my family's genealogy, I discovered that my grandmother had a grandmother named Susan Kinney. Her father was Daniel Kinney and her mother was Mary Freeman. "Kinney" is a Gaelic name, and is cited as being Scottish, Welsh and/or Irish in origin. "Freeman" could be many things -- German, Anglo-Saxon or an Anglicized version of a French, German or Irish name.

It can be tricky in genealogy to make assumptions about where a family came from based on name alone. (Consider the story, probably a tall tale, of the Jew named Sean Ferguson, allegedly because when asked his name at Ellis Island, the frazzled man answered “Shoyn fargesn," meaning "I've forgotten.") Until I find more information on two people forgotten by history -- Daniel P. Kinney, born around 1814 in New Jersey, and Mary I. Freeman, born around 1822 in Salem Township, PA -- I won't know for sure whether I need to put on an Aran sweater, a kilt or maybe even the red dragon of Wales. Whatever it is, I hope it doesn't clash with my 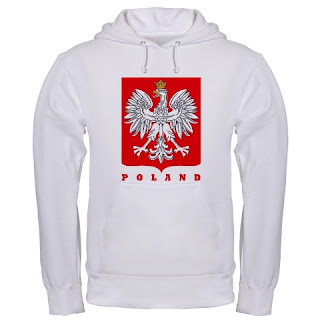 Polish eagle sweatshirt.
Posted by Carol at 9:52 AM

Happy St. Patrick's Day, sweetie! The Irish could certainly do worse than to claim the likes o' you ...

(P.S. If you do have some of the auld sod background in you, just overdye the sweatshirt green. It will look ... different ...)

That was a lovely post. I really enjoyed. As you know, from a mostly-lurker that is high praise indeed!
Thanks for a great blog, Carol!

Great post. My dad was English/Irish and my mom is Polish/Ukranian. My dad's brothers were only ever concerned about the paternal Irish side and it hacked my dad off no end. Which is why I'm such an Anglophile and own way too many BBC DVDs. He loved his mother dearly and found it insulting when people chose to forget where she came from.

ps) my dad was from Shenandoah, PA coal country.

We grew up believing we were related to Sean Ferguson.

I hear you on the coal mining. My FIL joined the army and went to Korea instead of going down the mines, he figured it was safer.

When I was a kid, we had to fill out a form every year at school, and there was a place for "nationality". If you put Canadian, they made you change it, which pissed off my Ma. So she said if they want your origins, they're getting them all. Which meant by the time I was 8 yrs. old I could print (on a line about 3 inches long) Ukrainian, Danish, Irish, Scottish, Spanish, Swedish, Norwegian, Chinese. I am still the Queen of eensy writing.
(They don't do this anymore thank goodness)
Ma always wondered how anyone knew the answer to that question anyhow? I mean, do any of us know what our great-grannies got up to?
Barb B.

My problem with St. Pat's day is not that the day exists but that others do not. No St. George, David or Andrew. No countless others from other countries days. My English husband says it's his second least favorite holiday here after Independence Day! Maybe I could be more enthused if more were celebrated than green beer, drunkenness and corned beef. Surely this beautiful country has begotten so much more but that's why I normally hear about.

I don't like St. Patrick's Day and wouldn't miss it a drop if it was never celebrated again. As much as I like my Irish ancestry, I strongly dislike holidays in which everyone feels it's their duty to get as drunk and obnoxious as possible. You can add to the list Halloween and New Year's Eve.

Sorry, Carol, this was a great post and I certainly don't mean to hijack the comments to kvetch.

My MIL grew up in Wilkes-Barre. The place you describe fits so well with the stories she tells. I wonder if you might be of an age? How old are you?

It's fun to read about it through your eyes.

As a two-passport-carrying dual US and Irish citizen, I too, lament that St. Paddy's Day has devolved into little more than drunkenness. We're so much more than that.

I thank you, Carol, for not pretending to be Irish when you're not, and not hijacking someone else's holiday in order to get drunk and act like an idiot. Tell us about a big Polish holiday sometime, please. I'd love to hear it.

(FYI - St. George's Day is April 23rd, St. David's Day is March 1st and St. Andrew's Day is November 30th. Those holidays do exist, but I can't comment on who celebrates them how, but it does seem that they haven't gotten hijacked by the general US public as an excuse to get drunk.)

Very interesting post. I am very interested in genealogy. Like one of your other readers, I have dual nationality - American born and Irish by marriage and residence. All my ancestors came to the U.S. from the British Isles hundreds of years ago - even on the Mayflower, if you can believe it! I love celebrating St. Patrick's Day in Dublin even if festivities go a bit over the top with the visiting American bands!