Recently I was sent two review copies of books that appealed to the child in me (in the best sense of the phrase).  So let's do a No-Bull Book Review Twofer. 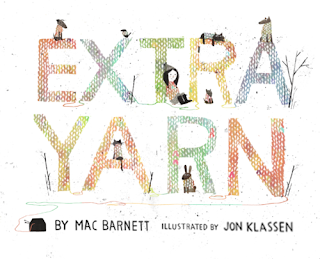 If Barnett and Klassen aren't knitters, they must be married or related to knitters, in particular the yarn-bombing kind.  For example, only someone with a knitter's soul would imagine a world in neutral, restrained colors --except for the yarn, which adds a rainbow of color wherever it is used by the girl. Only a knitter can truly understand the desire to cover everyone you know in handknit goodies, like the girl who lovingly knits sweaters for all the people and animals and even inanimate objects in her life. 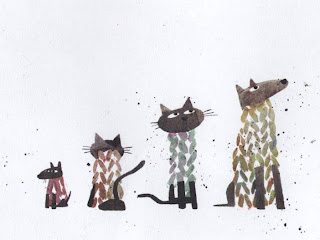 I particularly loved the way that the illustrator used the shapes of real knitted fabric for all of the knitted items -- a nice touch that packs a lot of punch. It's a lovely book and would charm any knitter or under-8-year-old child.  Not surprisingly, the book has been getting rave reviews from both the knitting community and the publishing world, so I highly recommend it for any kids in your life. And even for the grown-up yarn lovers with a sense of whimsy. 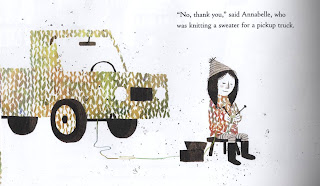 The second book is a more traditional knitting pattern book but one with a somewhat untraditional topic:  knitting dinosaurs.  Knitted Dinosaurs: 15 Prehistoric Pals to Knit from Scratch

(STC 2011; MSRP $16.95, available for $11.53 through the link as of the time of this writing), is a delightful book full of detailed patterns for knitting dinosaurs. 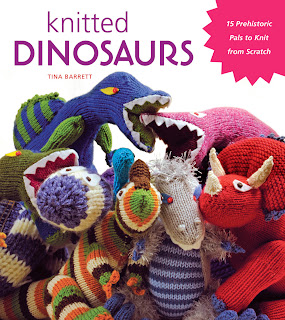 When I was in first grade, I remember very distinctly going through a phase where I was fascinated with dinosaurs. I had little plastic ones of all kinds, and I knew all of their names, what they ate, and so on. (Once my kids reached that phase, I was shocked and appalled to learn that some of the dinosaur names I learned don't exist any more.....good-bye, Brontosaurus!) 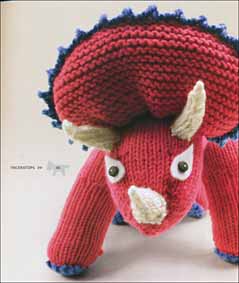 Barrett notes that when she began working on the book, her daughter was in a prehistoric phase:


We were surrounded by dino books, a roaring plastic Spinosaurus and even a "hungry dinosaur" game. Therefore, I felt well qualified (one step away from being an expert paleontologist in fact) to tackle the challenge of creating some woolly dinosaurs with my own needles and yarn.


As noted in the title, there are 15 prehistoric creatures contained in the book. After the introduction, there's a gallery in which each creature is shown in a full-page color photo. Since these patterns do have a lot of 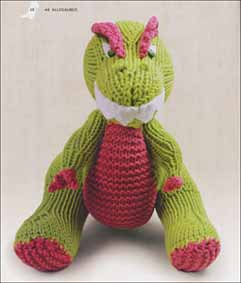 thoughtful details (in the allosaurus above, for example, note the way that garter stitch is used for stomach and paw pads, and clever shaping makes the face modeled and more expressive rather than a simple oval or rectangle), the big photos are helpful for the maker to use as reference. 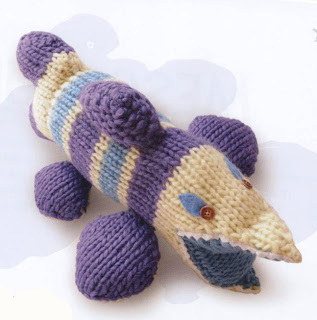 The patterns are then presented, with a description of what the real dinosaur looked like, more close-up photos, list of supplies, templates for felt embellishment, and often including additional interesting factoids about the dino (e.g. "Stegosaurus had a tiny brain, about the size of a walnut, but he had very BIG spikes on his tail."). 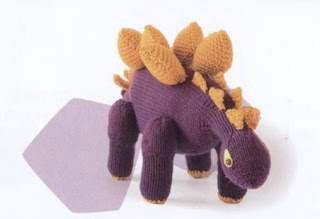 I was really impressed with the cleverness of the designs. For example, the ankylosaurus was a dinosaur with thick bony spiked plates on its back. Barrett uses bobbles and a textured pattern to mimic the plating and spikes: 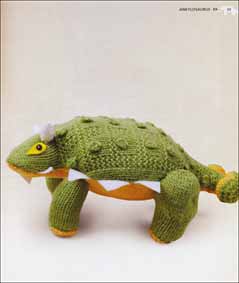 It's fun to see someone who takes both her knitting and dinosaurs seriously enough to get all the details right! 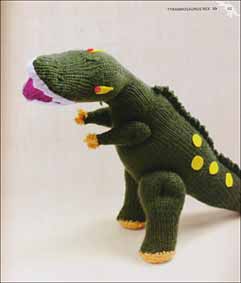 The vast majority of the patterns are done in DK weight yarn (various fibers are used, including wool, cotton and bamboo), with a few done in superchunky yarns. While many of the brand names used might be relatively unfamiliar to American knitters (e.g. Stylecraft), the back gives distributor information and in any event, the gauges are certainly common enough that substituting would be very easy. 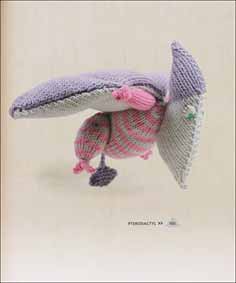 The instructions look pretty detailed, walking you through each body part, then explaining how to put the pieces together and embellish. After the pattern section is a separate "Techniques"section, including instructions for gauge swatching, basic stitches, and tips on stuffing, using thread to make joints for the creature, attaching eyes and embroidery stitches. There's even a two-page layout on dinosaur names, with miniphotos of each dinosaur along with pronunciation and the name's meaning.

This book was released a few months ago, and I don't know how it slipped under my radar. All in all, an excellent and surprisingly detailed set of prehistoric creatures to knit for the kid or adult in your life who is fascinated with them.  Yabba-dabba-doo!

Wow.  My readers are amazing. In just a few days, we've already raised over $600 for Summer Search Philadelphia.  Thank you from the bottom of my heart. If you haven't made a contribution yet, there's still plenty of time. Here's a link to my original post with all the details. (Also, Summer Search's United Way Donor Option Number is 46628.)

Thanks for the book review on Extra Yarn ... my two kids are too old for this but I think I have to get it for myself! Congratulations on raising so much money so far -- whoop whoop!

If you haven't, you should give the Barnett's Brixton Brothers detective books a try. Somewhat Snickety in feel.

i couldn't resist, and ordered the dinosaur book for my (still) dinosaur besotted 27 year old daughter. it arrived at her house over the weekend and she is thrilled. i have a feeling her nephew (my grandson) will be equally as thrilled, just not as immediately thrilled.