It's going to be a little frenetic here through Labor Day, but rest assured that once school starts again, my schedule will normalize. And you know what that means? More posts, and more posts about knitting. To whet your appetite, in coming weeks, Go Knit In Your Hat will present to you

and whatever else my twisted little mind can come up with. In the meantime, see if you can figure out why this lovely memorial to deceased sailors 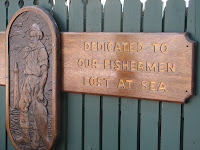 is attached to a fence that surrounds a filthy dumpster full of stinking garbage. (Every time a tourist throws a salt water taffy wrapper in this dumpster, they say a prayer for those mariners that never made it home to steal the chocolate ones out of the box because nothing's worse than the last stale peach-flavored taffy nobody else wanted...).
Posted by Carol at 6:06 PM

Yay! More posts! By the way, the Véronik Avery link is broken....

Thanks, bellamoden! Just fixed them (I hope).

I for one, have been waiting far too long for a tour of the bomb shelter!

Maybe the plaque to the sailors started out someplace else ...

Yes, perhaps it started out as a plaque on the feminine hygiene receptacle in the ladies' bathroom, but they thought that was too skanky a place for it....

I have a theory about salt-water taffy...I think they all taste exactly the same...only the colors are different.

So, there really is no peach-flavored taffy...only peach-colored taffy.

Saltwater obviously contains Prozac or cocaine--else why would you feel compelled to eat the whole box?
Even the "licorice" ones?

There goes Joe's theory: the licorice ones really do taste different.

I had some peanut butter flavored salt-water taffy this summer. And it was surprisingly good.

If I stop and think about all the sailors I have known (not many), it occurs to me that maybe it was originally a beer bottle recycling area?

Was there once a popular sailor hangout there?