A few weeks ago, I reviewed the lovely book, Vintage Baby Knits: More Than 40 Heirloom Patterns from the 1920s to the 1950s

, by Kristen Rengren, brought to you by the creative geniuses at Stewart Tabori & Chang. If you missed the book review, you can find it here). Today I'm pleased to be a stop on the Vintage Baby Knits blog tour. Kristen Rengren -- fresh off her gropefest interview with Dolores at The Panopticon, stops by to talk about yarn. 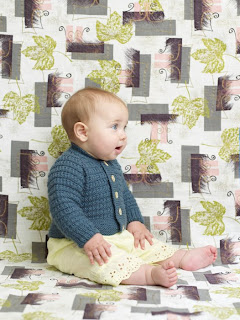 Welcome to Go Knit In Your Hat, Kristen! Let's get right down to the yarn talk, okay? First question: How did you decide what yarns to use? Were you trying to replicate the yarns the patterns were originally knit in?

Thanks, Carol! I didn’t take a total purist stance on yarns, but I did want to preserve as much of the original look of the patterns, so that played an element in yarn choices. There were a few decisions along those lines that turned out to be important:

Knitters did have a few choices in terms of material, but for the most part, they chose wool. Starting in the 1920s, cotton fell out of fashion for garments and was really only used to knit household items like slippers or doilies. During the late 1940s and 50s, some nylon and some early forms of acrylic started to appear, and in the late 50s cotton started to make a comeback for baby garments. Patterns were also occasionally published featuring silk and angora, despite the fact that these fibers were very expensive for the average knitter. But most knitters depended on the dizzying array of wool yarns on the market – hence the decision to make most of the projects in the book out of wool as well. (I did make a few exceptions – for instance the Jasper Diamond Hoodie is knitted out of a bamboo blend – but my logic was that if our predecessors could have gotten their mitts on something as lovely as bamboo, they surely would have.) 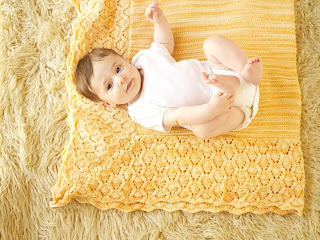 What about color choices?

Handpainted yarn as we know it basically didn’t exist yet. Machine-dyed variegated yarns were out there, but they were rarely used in comparison to solid color, tweed, or heathered wool. Where patterns were published for machine-dyed or “space dyed” yarns, they tended to be extremely simple garments in stockinette stitch in order to show off the novelty of the yarn, which is why none of them made it into this book – such patterns just wouldn’t have held the interest of the modern knitter.

I get asked a lot of questions about the palette I used. Most of the projects, of course, were photographed in black and white in the original pattern books, and very little information was given about color choices in the patterns. I did do some research into the colors that might have been popular for babies in that era – but while there was some information available on color trends in women’s fashion, I found precious little data on the subject of baby clothes. And in some cases (such as the trend of pink for boys and blue for girls in the first part of the century) tastes had changed enough so that I didn’t think I could get away with some of the color choices originally chosen by the designer. So I based my color choices in part on that research , but mostly picked colors that pleased me and that went together reasonably well.

One thing that a lot of people don’t realize is that in the first half of the 20th century, there were tremendous advances in the dyes that were available, and color palettes were far less limited than we might think. Another interesting note about color has to do with wartime knitting. During World War II, when yarn was rationed and chemical plants that made dyes were retooled to make munitions instead, knitters found themselves unable to get the dazzling array of colors that they had become accustomed to in the 1920s and 1930s. Knitters had to make do with brightly colored scraps of leftover yarn and even old yarn from unpicked old sweaters, combined with the more drab military colors typically available with ration cards. Turning necessity into opportunity, resourceful knitters embraced stripes, fair isle, and other colorwork. Unexpected color combinations became a bold fashion statement, and their popularity lasted right up through the end of wool rationing.

What else was different about yarns used in the originals vs. today’s yarns?

I’ve gotten to look at a lot of vintage yarn, and a few vintage projects – and while some of the yarns used from the 1920s to the 1950s were comparatively soft, knitters in the 1920s – 1950s just didn’t have the kind of soft, short-stapled fibers to which we have become so accustomed. While 19-micron-count merino is commonplace today, it would have been an inexplicable wonder to yesterday’s knitter. Also, I still can’t figure out how, but yarn seems to have been lighter. The average baby sweater pattern from, say, the 1940s called for half as much vintage wool as it generally took for me to knit the same pattern using modern wool. Given that most yarn is spun using the same antiquated milling equipment that was used in the 1930s and 40s, I am not really sure what the difference is. Actually if your readers have any speculation on this, I’d love to hear it.

What were your favorite yarns you knit with?

There isn’t really a yarn in the book that I didn’t enjoy working with. If you look through the book, you’ll see that many of the designs are knit with sock yarn. It’s soft, it’s springy, and it tends to have a smooth surface and a tight twist that was similar to that of many vintage yarns. And it has the advantage of being very hard-wearing. That said, some of the loftier, softer yarns were especially pleasurable to knit with. The tiny flecks of color and the beautiful muted palette are just perfect for vintage knits. Pear Tree Merino is one of my favorites. The Jackie Cabled Set and the Louise cardigan are made out of Pear Tree. I also really enjoyed working with Sheep Shop Sheep Three. While it wasn’t a traditional choice – it’s a silk/wool blend, and a sport/DK weight at that – it was really lovely to work with, and the finished Bunny Blanket has such a nice hand. I’m sure I’ll be doing projects in both those yarns again. 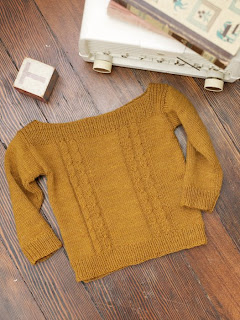 Okay, normally, this is the place where I'd abuse you for not using any Black Bunny Fibers yarns in your lovely book, but since you are such a sweetheart, I will skip over that part, as long as you promise to use some in your next book.

Here's fun news: if you go here, you can enter a drawing to win a free copy of the book, courtesy of the lovely folks at Stewart Tabori & Chang. For a list of the upcoming blog tour stops, go here. (Wednesday's stop is Sheep in the City.) Last, but not least, you can visit Kristen at her blog here. Thanks, Kristen!

Fantastic interview! Now, didn't rumor have it that the next book would have toddler patterns?? I have twin 2 year old nieces...