There's still a good selection of CashSock in the BBF shop 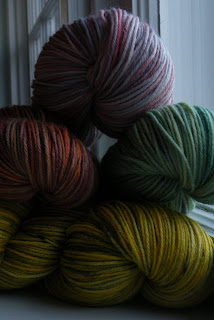 and I can assure you that the colors are much prettier than my photographs indicate. This time of year is particularly hard for me to capture colors because of the way the light changes (and there's so much less of it!). By the way, this update marks the premiere of my revamped store logo. I'm working hard to get my BBF pattern line going, too and am hoping to have at least one or two patterns ready for sale before Christmas.

In the meantime, here is my November book report:

Hurry Down Sunshine: A Father's Story of Love and Madness

by Michael Greenberg. Greenberg is a free-lance writer who saw his fifteen-year-old daughter experience a psychotic break one summer in the 90s. With her permission, he wrote a memoir describing the experience from his perspective. The book is at its most powerful in describing Greenberg's shock and anguish at watching his beloved daughter behave in inexplicable ways, his fear that she'll never once again be the daughter he knew and loved, and his concerns that the treatments given to her are as bad as the disease.

by Laurie Halse Anderson. This is a book written for middle schoolers that was recommended for Elvis by a neighbor who is a teacher. Elvis didn't get into it (I think he gave up too soon) but I thought it was interesting and finished it myself. The book is a fictionalized account of a fifteen-year-old girl named Mattie living in Philadelphia in 1793. As the book opens, a yellow fever epidemic (which actually happened) has begun to descend upon the city; given the rudimentary treatments available at the time, and the lack of understanding about what causes the disease, the death rate was high. Mattie watches as the epidemic devastates the city and people she loves. I like the way that the book seamlessly integrates historical detail with an exciting first-person story. If you've got a middle-school-aged kid interested in science or history, they might like this one. Or maybe you'd enjoy it yourself!

by Sarah Waters. Bridget passed this book on to me (thanks, Bridget!). I agree with her that the book takes a little while to get going; in the beginning, it seems like an okay Victorian novel of manners and social class. But as you get further into the story, the suspense starts to grow. The main character is Dr. Faraday, a Warwickshire country doctor who comes from a working class background. At the beginning of the book, he has just been called out to see a patient at the Hundreds, a local manor house. Over time, Dr. Faraday develops a strong friendship with the inhabitants of the house: Mrs. Ayres, the widowed matriarch, Roderick, the WWII vet with what may be PTSD, and Caroline, the plain but charismatic daughter. A good bit of the novel has to do with the changing economic and social times in England after the second World War, in particular how those changes affected the landed gentry. But there are also the emotional entanglements that Dr. Faraday develops with each of the inhabitants of the Hundreds, and the steadily creeping suspense caused by what may or may not be a ghost in the house.

by Sarah Vowell. I've read and liked a lot of Sarah Vowell books and although this one has some good points, it was definitely not my favorite. Vowell is a contributor to This American Life and is known for her quirky essays that often touch on historical themes. The Wordy Shipmates is a lengthy meditation on the Puritans, Pilgrims and other English settlers who came to this continent in the 1600s. While there are flashes of humor, and Vowell obviously is intelligent and well-versed in Puritan history, I didn't enjoy this book as much as her others for two reasons: (1) I don't know that much about this period in history, and Vowell assumes the reader knows more than I did; and (2) I didn't find the subject matter that interesting to want to read an entire book devoted to it (my bad). Vowell is really interested in the philosophical underpinnings of the early settlers in this country -- why they decided to leave England, what they hoped to find here, the source of the so-called Puritan work ethic and "Puritanism", and so on. I am more of a fan of Vowell's pop culture ruminations, I guess.

by Zadie Smith. This is a book I've been meaning to read ever since it got shortlisted for the Booker prize a few years ago. It's a thick book, and even though I finished it about 2 weeks ago, I'm still not quite sure what I thought of it.

The central characters in On Beauty are the Belsey family: Howard, the fifty-something, white art history professor who grew up in a working class part of London; his wife Kiki, a plus-size (I mention her weight only because it's germane to the plot) African-American hospital administrator; and their children Jerome -- a newly born-again Christian, Zora -- trying hard to make her own mark at the college where her father teaches, and Levi -- plagued by the sense that he's not "black enough," he adopts hip-hop music, rapper clothes and a tough-guy accent. The characters are real and engaging, but there is just so much going on! Howard is having a mid-life crisis, looking at his failure to get tenure and his unfinished book on Rembrandt, while Kiki tries to cope with his infidelity, torn by resentment that she sacrificed some of her own goals to raise a family while at the time she is bursting with pride and love for her children.

In addition to the Belseys -- and they alone would be quite enough to fill a book -- are the other characters, notably the Kipps family, who are a sort of counterpoint to the Belseys. Where Howard is flamingly liberal, Monty Kipps is rabidly conservative. Howard is an atheist, Monty a devoted Christian. Howard is white; Monty is black. Monty's wife is languid and sickly while Kiki is bursting with energy and life; yet Carlene seems more content with her life whereas regret seems to eat away at Kiki. Even their children are opposites: Zora Belsey is an earnest scholar, almost chaste in her crush on a fellow collegian, whereas Victoria Kipps uses her sexuality and seems much less reverent about academia and her family's conservative viewpoints. Michael Kipps is a buttoned-down London financier, whereas Levi Belsey wears droopy-drawer-jeans and ends up working on the streets with a band of Haitian street vendors.

I haven't even gotten to the some of the other characters in the book, but you can see how maybe there is just too much packed into this book. I would have found it less overwhelming and more meaningful if Smith had focused on fewer people and plotlines.

That being said, there are some wonderful things about the book. Its irreverent look at academia, in particular the left wing/right wing "culture wars", is at times hilarious. Howard -- who prides himself on his liberal sensibilities -- ends up sanctioning the muzzling of speech for fear it is politically incorrect; Monty lobs an intellectual hand grenade at the college by promising an address called "Taking the Liberal out of Liberal Arts." Both are skewered deliciously and repeatedly. Other aspects of American culture are skewered, too; the Belsey family's frustration at Levi's attempt to look and sound like a gansta are met with bewilderment (Kiki wonders why her child keeps affecting a "Brooklyn accent" when he lives a hundred miles north of Brooklyn). Zora's dead earnestness and indefatigable attempts to make her mark at the college, Howard's adherence to a perceived liberal party line, Monty's right-wing bloviations made me chuckle and I read portions of the book out loud to Tom at frequent intervals.

So that's November... and don't worry, bleak Scandinavian mystery fans: Anmiryam lent me a good one that'll be in my December book report...
Posted by Carol at 7:39 AM

and the days will be getting longer after 12/21!