Whew. What a weekend. I got in Sunday night and basically collapsed: between all of the activity, the classes and the exhilaration of being around so many fiber people in one of the greatest cities in the world....I was tired to the bone. I'm starting to catch up, though, and I'll try to give you a recap of the weekend, although right now it kind of seems like a whirlwind.

I got up early Thursday, but before I could leave for the Big Apple, I needed to visit Elvis's middle school. Unfortunately his big band/orchestra concert was scheduled for Thursday night, and given the VK Live schedule (a teacher's meeting to attend at 7:30 a.m. Friday, followed by my first class), I was going to have to miss it. (This made me very unhappy.) But they were doing a short version of it in the morning, so I went and got a chance to see some of it, and it was wonderful. Then it was off to 30th Street Station, to catch a train to New York City. 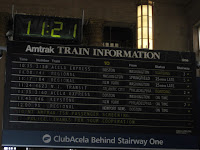 the Big Board at 30th Street

I love riding the train; I find it very relaxing. The ride was quick and I caught a cab to the hotel, which was at 53rd and Sixth Ave. I was lucky in that even though it was before check-in time, a room was ready, so I was able to drop off my stuff and chill a little bit. I didn't see too many knitters milling about, but I knew I wasn't going to have a lot of time later in the weekend to take advantage of being in New York, so I decided to take a walk. My ultimate goal was City Quilter, a quilt shop all the way down on 25th St. It was a great walk, and it gave me a chance to soak in some of that unique New York atmosphere. 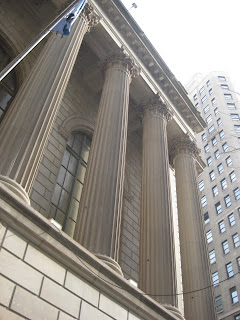 Including a run-in with Elmo and Cookie Monster right on Sixth Avenue. 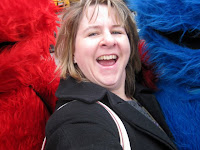 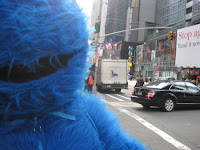 It's hard to photograph yourself with large fuzzy monsters

When I arrived back at the hotel, my timing couldn't have been more perfect. For who was walking in but rural chicken-farmer and designer/author Melissa Morgan-Oakes? 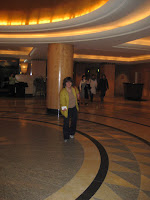 If you are on Facebook, you may know that MMO and I have a running gag about me being her stalker. In the above photo, she had just walked in the door of the hotel, backpack still on, and it just so happened that I was in the lobby at the time. Pretty good stalking, no?

I was quickly joined by Kathy Merrick, along with Taiu and Kersti of Koigu fame, and Mr. and Mrs. Buffalo Gold themselves, along with Brooke Nico (lace designer extraordinaire). We took the subway downtown, and ended up at Purl's new store. I'm always knocked out when I go to Purl. Such a lovely selection of yarns, and this trip I was also enticed by the quilting fabric. I even stumbled over some Koigu Mori at 40 percent off (!). After that, we decided to wander around Soho. Miss Kersti was quite the shopper and eagerly checked out shops selling everything from Doc Martens to Chanel to chocolate-covered bacon. (To my knowledge, no one actually tasted the chocolate-covered bacon, although I offered to buy Kathy some.)

Back to the hotel, where we crashed. When I go to these fiber festivals, I end up practically vibrating in place in my bed. I was so hyped up that I could barely can get to sleep. I was so eager and nervous to teach my first class that I had no trouble waking up on time and getting down to the 7:30 teacher's meeting. All I can say was walking into that room was such a rush: so many dear friends were there (like Franklin) and so many of the amazing fiber people I've met through the years (like Kristin Nicholas and Melissa) and in addition, so many of my knitting heroes (Cat Bhordi, Meg Swansen, Debbie Bliss...). 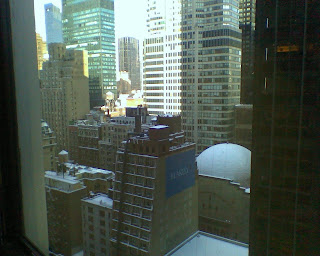 View from the 20th floor of hotel
The teachers would have loved to spend the whole time chatting and catching up, but we needed to cover practical matters, and the Vogue staff was really concerned with making sure that things went as smoothly as possible so that students would have a good experience.

When it comes to the teaching, I can honestly say I was knocked out by my students. They were eager and enthusiastic. They asked great questions, often anticipating topics I planned to cover later, and offered up interesting and relevant experiences from their own knitting. There is something absolutely amazing and gratifying when you can actually see a light bulb go on in a student's eyes as something connects with them, and they understand stuff they hadn't thought about before. And in each class someone contributed something new or that I hadn't heard before, so that I was taking notes of things to remember to add to future classes. 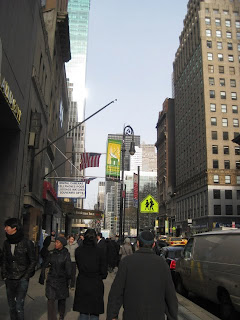 walking down 6th Avenue
I had just enough time in between classes for lunch and a little rest in my room. After the second class of the day, I was able to attend the marketplace preview from 5 to 7. It was crowded, however, and I was so glazed over from teaching, that I didn't stay that long and left after ogling the new Koigu pure silk yarn at String's beautiful booth. (It's divine.)

That night there was a cocktail reception. It was fantastic, as I ended up meeting the amazing Sarah Hatton, Rowan designer extraordinaire, Josh Bennett (a.k.a. Foxy Knitman), and seeing Debbie Bliss, her adorable daughter Nell and son Will, and so many other fun people. We were having such a good time that the hotel people ended up kicking us out by blasting Chopin piano music and turning the lights up, as we just didn't want to leave.

Back to bed, and my first official day of VK Live was over.

To be continued
Posted by Carol at 6:24 AM

You forgot that part about where you tried to follow me to my room, creepy stalker style, all "Oh, I am going to my room too... what floor are you on? And what room was that?" Miss Innocent.

You should have tried the chocolate covered bacon - Robin has, and says that it is delicious.

Yet another reason I lay prostrate at Robin's feet.

Hi Carol - So great to see you too! Hey, I just heard you are coming to the Webs Author event March 27th? We need to get together if you can fit it in and Kathy E doesn't have you all tied up! I only live 30 minutes from Noho.

The students were great, weren't they? Glad to be back home but it is a bit of a let-down? More snow tonight.
Kristin

Sounds like so much fun! Glad you had a good time.

I'm sorry I didn't get to say "hi", though I know I saw you in passing on the way to my first class (with Franklin, no less). I found the whole experience pretty amazing and, of course, exhausting.