Must get blog rolling again.....

Okay, I don't want to become all "wah wah wah" here....so let's just say that I'm surfacing again, with several deadlines met, and the rest (I hope) more or less under control. Now I've got to get this blog rolling again.

So let's play catch-up with an overdue book report. Somehow I haven't done a single one this year, so here's January and February combined. With all the snow and a lot of deadlines looming, I found myself gravitating toward escapist reading, which for me mostly consists of mysteries & police procedurals. I did, however, continue to explore some young adult titles and found two winners there.

I'd Know You Anywhere

by Laura Lippman. Lippman writes the Tess Monaghan series of books, a detective series set in Baltimore, but I've been reading some of her freestanding suspense books because my library always seems to have them. In this book, the main character is a woman who was kidnapped with her sister when they were teenagers. Eliza was held captive for a lengthy period of time before she was found by a state trooper pulling over her kidnapper's car for speeding. The book explores some of the issues that have arisen in cases like Elizabeth Smart, when an impressionable teen is kidnapped, held for a period of time, and although technically has opportunities to escape, has been psychologically conditioned to stay with her captor. More disturbingly, the book also explores the issue of survivor's guilt, through the eyes of a kidnapping victim who witnessed her captor kidnapping and killing another teen. The only part about the book that didn't ring true with me was the plot device that gets the whole thing rolling: Eliza is an adult, with a family, living happily in a Maryland suburb when she gets a creepy letter from her kidnapper insisting that she get in touch with him so he can make amends before his execution. (I think I'd be inclined to tell the guy to go to hell, but maybe that's just me.)


Bloody Crimes: The Chase for Jefferson Davis and the Death Pageant for Lincoln's Corpse

by James Swanson. I read Swanson's previous book, about the manhunt for John Wilkes Booth, a few years ago and really enjoyed it, so when I had a chance to snag a free advance copy of this book, I jumped on it. In "Bloody Crimes," Swanson juxtaposes two key events that took place in the days immediately following Abraham Lincoln's assassination: the quest to capture Jefferson Davis after General Lee surrendered on the battlefield, and the bizarre-yet-heartrending funeral procession as Lincoln's body was carried by train through the northeastern U.S. on its way to burial in Illinois.

The background of Lincoln's funeral procession is macabre and fascinating, but there comes a point when Swanson just overdoses on detail, providing lists and lengthy quotes from letters, and so much minute information that the drama of this extremely emotional event -- the beloved president who kept the "united" in United States is mourned by the people who loved him, bringing flowers and other tributes to his coffin, lining up along train tracks to watch the railcars carrying his body go by -- is drowned out. The events that Swanson seeks to parallel with it -- Jefferson Davis's stubborn insistence that the war wasn't over, followed by a half-hearted flight through the south to evade capture -- just don't pack the same emotional wallop. Again, Swanson overloads the reader with details, quoting too many letters at too great a length, and losing the thread of the narrative in the copious details.

I learned a lot about the days following the Civil War in this book, including a great deal I'd never heard about the Lincoln funeral processsion, but I ended up skimming through some of the excessive dry detail. I think the book would have greatly benefited from a brutal editing, and I also think that perhaps the structure of the book was inherently flawed in that trying to base an entire book on the parallels between the funeral procession and Davis' flight just didn't work.

When You Reach Me

by Rebecca Stead won a Newbery Award. This is one of those YA books that my oldest kid read first and recommended to me. I really, really enjoyed it. It's a very fast read but the plot is interesting. (Also it features my favorite game show ever, The 10,000 Pyramid.) The book takes place in 1978 New York. The main character, Miranda, has just had a big fight with her best friend, and even her favorite book, A Wrinkle In Time, doesn't completely console her. She starts to receive weird notes that say they want to save her life. I won't spoil it by giving away any more of the plot.

I blew through This Night's Foul Work

and Seeking Whom He May Devour both by Fred Vargas. They are part of her series set in France, featuring quirky Commissaire Adamsberg. I've been enjoying this series a great deal and am looking forward to reading more of Vargas when more of herbooks become available in the U.S. I also read The Ice Princess

by Camilla Lackberg, which Amazon insisted I would like because I read so many Scandinavian mysteries. In this book, the first to be translated in the US by Lackberg, a Swedish writer goes to a small coastal town to go through her late parents' belongings and prepare their house for sale. While she is there, an old friend commits suicide. The writer is compelled to investigate the suicide along with a local police officer. I found this a diverting enough thriller, but not as well-written as some of the other Scandinavian authors I've read. Likewise, What Never Happens

by Anne Holt (a Norwegian author) was a solid thriller but again, more plot-driven and less literary than some of the other Scandinavian authors I like. Last on the mystery rota was Dissolution

by C.J. Sansom, which was a bit of a departure; it takes place in Tudor England and features a hunchback lawyer who is sent to investigate a strange death that occurs in a monastery -- during the time during which Henry VIII's ministers are dissolving monasteries and taking the property & riches therein.

Trapped by Michael Northrup was another quick YA read about a group of teens getting snowed in by the blizzard of the century. The kids miss their rides home on an early dismissal day, and get trapped in their high school when a nor'easter socks their New England town with feet of snow. Lots of suspense, but a rather abrupt ending. Perfect for the "reluctant" boy reader in the family.

Last was my favorite, The Evolution of Calpurnia Tate

by Jacqueline Kelly. This book is aimed at the "independent reader," kids around grades 4 to 6. I was completely charmed by the book, which was a Newbery runner-up last year. The title character is a girl growing up in rural Texas at the end of the 19th century. Callie is smart and something of a tomboy; she is the only girl in a family full of boys, and she chafes at the expectations society (and her mother) place on her to be more "feminine." She'd rather catch tadpoles and write in her nature journal than practice cooking and sewing, and as the book begins, Callie discovers that her grandfather is immersed in studying science, particularly natural science. Callie and her grandfather form a loving bond as they explore science together.

I loved this book in the same way that I loved books like "Anne of Green Gables" and "The Secret Garden." They all feature heroines who are spunky, smart and outsiders in some way, but who manage to forge bonds with those around them while remaining true to themselves. There's lots of humor, and some bittersweet parts, too, as Callie starts to face growing-up issues -- seeing her beloved older brother fall in love, feeling her younger brother's pain at realizing his pet turkeys are meant to be Thanksgiving dinner.

Last but not least, I updated the BBF shop with 20 skeins of beautiful BFL Tight Twist, a fingering-weight blend of 75% blue-faced leicester and 25% nylon, with generous 450-yd skeins. Here's a peek: 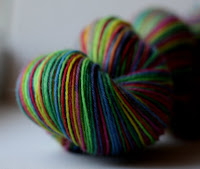 Whah, whah! Oh dear... Thanks for the book reports, and the pics of your always gorgeous yarn.

I love your book reports! Thanks for this one!