If I believed in magical thinking, I'd be certain that I jinxed myself in my last post. You might have thought, as I did, that I'd exhausted my quota of natural disasters for the short-term, but apparently I did not. Within the last 48 hours, my 80-year-old mom had to evacuate her home after massive rainfall from Tropical Storm Lee caused the Susquehanna River to rise precipitously.

My family lost everything in the 1972 Hurricane Agnes flooding, so this brought up all kinds of frightening flashbacks. The particular neighborhood that my mom lives in is about 200 or so feet from the Susquehanna, but protected by a very large levee.* The levee was designed to protect from 41 feet of water, and projected totals were very close to that amount. The mayor of Wilkes-Barre ordered evacuation of about 65,000 W-B residents, including my mom. She was safety ensconced in my brother's house, along with essentials and irreplaceable items like family photographs. My brother carried all sorts of other items up to the top floors of the house in the hope that if the flood waters came, they might not reach the second floor or attic.

Last night was dicey. The river was supposed to crest around 2 a.m. but apparently the water gauges were damaged by the weather conditions and water and malfunctioned. We learned today that the river did crest, albeit at over 42 feet (more than projected) but the levee system had a few extra feet built into it that prevented the water from flooding. Phew. The river level is currently dropping but it's a much slower process and there is now concern about the levee system holding up under the weight and pressure of the water over the next day or two. 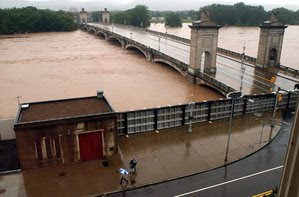 Market Street Bridge in downtown W-B
Photo from Times-Leader newspaper
Right now, my mom is safe; she has flood insurance; and she has plenty of people who love her and will make sure she is okay. If you can spare a good thought or a prayer (if you're so inclined) that the levee system will hold, I'd greatly appreciate it.

Nothing is more dangerous than a stressed-out dike.

*Lest you think that the entire W-B community dodged a bullet, there are many areas within a few miles of my mom's house that have already suffered devastating flooding -- Nanticoke, Tunkhannock, Shickshinny and others. Having suffered something similar as a child, my heart breaks for them.
Posted by Carol at 3:09 PM

OMG. I hope your family will be safe and their homes unharmed. This must be horrifying for all of you.

Prayers and good thoughts headed "Nana's" (as I've grown to call her from your stories) way...let's hope good old Yankee ingenuity built even stronger levees than needed and that they perform beyond expectations...

we got stuck in cooperstown NY yesterday; we made it home today, but not before having to backtrack and go around. all the creeks/streams/delaware river were running brown and angry. not a pleasant site.

I know others, including my own husband, who lost everything in the 1972 hurricane Agnes flooding. I grew up in the Back Mountain area and still live there now. My thoughts are with your mom and the many other evacuees that I know. I pray that the dike holds...and I pray for all those not protected by the dike system who have lost so much.

Those are some intense pictures. Crossing my fingers for all in the endangered areas. What a spring and summer!

Hope the levee holds and that those impacted are not put out of their homes by flooding.

Sending good thoughts to you and yours - will think positive thoughts! for a happy outcome! knittinnow/Terry

Well, there's a stressed-out dike, and then there are out-of-control wildfires.

I think that they are Texas' punishment for inflicting Dubya and now Perry on the US. (yes, I'm a Texan, yes, I live here, and no, though I've had many many chances to vote for those two dorks, I never have)

Prayers and good thoughts for your mom. I've been watching some of the flood coverage with dismay - I can't imagine how awful it would be to be wiped out by that.

(And I really, really hope that the next big rainmaker avoids the eastern U.S.....and comes here, to Oklahoma and Texas, where we are burning up with fires and drought.)

I'm so sorry to hear that this round brought you and your family such trouble. We too managed to jinx ourselves. I hope you all stay safe.