Spinning and a winner

When I was last at the beach, I toyed with the idea of bringing along my sewing machine. I decided against it, even though I don't get nearly enough time playing with fabric, because I thought it would be too hard to know what to bring with me in terms of fabric and thread. Instead, I opted for my handy-dandy spinning wheel, an Ashford Traveler, which is really designed for portability.  I popped a few extra bobbins and some roving in a bag, and I was good to go.


I haven't been spinning much lately and I really enjoyed getting in the groove of making yarn. One of the rovings I played with happened to be a roving that I dyed a few weeks ago. It was a gray-brown fleece and I played with adding some color to it, while preserving a good bit of the natural color. 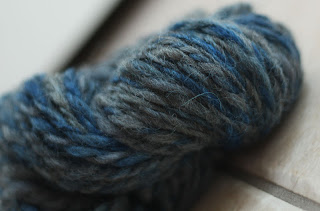 I was pleased with the way it came out, and am trying to figure out what it wants to be knit into. I suspect it will knit at around aran-to-chunky gauge, so scarf or hat or mittens, maybe.

If you're interested in playing around with some similar rovings, with some of the natural color peeking through the dyed colors, I've got four batches up in my Art Fire Studio.

Two are shetland wool; two are coopworth. And for the next four days, use the code "FRIDAY10" for ten percent off your order (one time per customer).

My last post was a review and giveaway of Hunter Hammersen's new book, The Knitter's Curiosity Cabinet. The random number generator selected Bonnie C., of Indiana, as the winner.  I've sent you an email, Bonnie, so make sure it doesn't get caught in your spam filter.)  Congrats to Bonnie and thanks to Hunter for making the giveaway possible!

Thanks again for the giveaway! I'm VERY excited to see this book. Thank you for your kindness.