Before I move on, I must again ask that you respect my wishes when it comes to the comments. I've had to delete 2 comments (plus 1 that was a duplicate) in which I felt the vicious (yes, vicious) tone and the singling out of another commenter crossed the line. I also deleted some comments that kept going on and on about the subject after I declared it closed. Those were my calls and if you are unhappy with that, then as I've already suggested, go bitch and moan about it elsewhere.

But not in my comments.

Let's get back to yarn. Today: a fall preview of Nashua Handknits.

Nashua Handknits has been an exciting company to watch. Only two years old, Nashua is run by Linda Pratt (who, among other things, is a former LYS owner) and is part of Westminster Fibers, the distributor of Rowan and Jaeger. We've had the Creative Focus Worsted at Rosie's since it came out, and it's a very popular, soft and well-priced wool/alpaca blend that comes in lots of good colors. Here's what to look for this fall from Nashua:

One of Nashua's particular strengths is its stable of designers: they get top-notch folks like Kristin Nicholas as regulars and other "guest designers" whose names you'll recognize if you pore over knitting magazines the way I do. Having excellent pattern support makes a lot of sense for a yarn manufacturer, because it gets people excited about using the yarns and it takes the angst out of yarn substitution for timid customers. Nashua is releasing six new pattern books to accompany their yarns -- 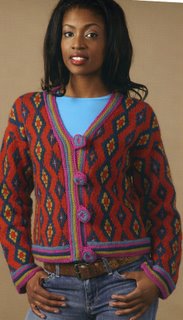 and here's a cool felted bag from Melissa Mitchell, who is giving Nicky Epstein a run for her money as the Queen of Felted Bags: 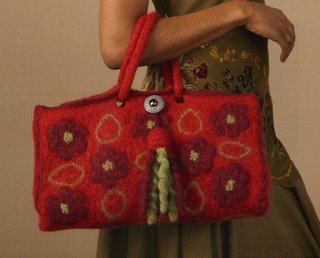 Arriving soon at a LYS near you.

Tuesday was the first day of third grade for J. and all went well.

Several of you have asked about G.'s surgery. It's scheduled for a week from today. I'll keep you updated, so send G. good thoughts.

Sending my best wishes for Grace. (That name was on my short list for girl's names, but I had two boys.) I hear that surgery on the child is pretty tough on the parents, so my thoughts are with you and Tom, too.

Thanks for the yarn review. In my next life, I want to be Kristen Nicholas.

Love the blog, and I am very happy that you are using your power for good instead of evil. Keep it up.

I didn't know your daughter would be needing surgery, my prayers are with you both. Speaking of health, how are you? Is the Lymes (spelling?) gone? Does it ever go completly?

I bought my first Nashua last night--hope it isn't too stiff for the scarf I want to do. I will let you know.....

I like that vest, but I don't think I could pull off the pattern on the bust. I'm interested to see the other patterns now. Fitted fair isle is a good thing.

Hopes that all goes well for Grace.
The North American Collection #3 sweater is really great, but my tastes would run a little differently with the border colors and the closure. Overall, though, the design and cut are great. The vest is really nice, too.
Great review.

To Gracie from Auntie Marilyn:

Sweetie, you'll be just fine! And I know that Mommy will buy you some cool toys to play with while you're getting better. Some day Auntie will show you all her scars, OK? Lotsa love!

Hugs to Gracie - I have a kid who has multiple surgeries for various stuff (bad knees, sinuses, and a broken leg), and she's only 18. Make mom get you a little bell so you can drive her nuts!!! That way she feels needed...

My daughter posts children's pictures for me and her mother-in-law (both of whom live at a distance from the kiddies.) The trick is to post to a closed list, or locked posting. That way relatives or whoever you designate across the country/world can see, and the rest of us don't even know you posted something. Perhaps you don't need this, but another reader might.

Isn't it great that we are all different? It is one of the things that keeps life interesting. That said, I would nominate a couple of those designs for the late www.youknitwhat.com (or whatever the url was). Just my 2¢.

Best of luck to kidlet and mom re: the surgery. I suspect you would rather go under the knife yourself than have your child on the table. That seems to be one of the characteristics of a good parent.