Okay, if you have a hard time with breathless gushing and frequent exclamation points, you might want to pour yourself a very large Bloody Mary or glass of wine before you start reading this one. I promise I will not use the word "squee" -- besides, I think the lovely Anne Marie, fearless leader of the Montco SnB, used up southeastern Pennsylvania's quota of squees yesterday.

Yesterday was Franklin Habit's 1000 Knitters shoot at Woolgathering, in Kennett Square, PA. I don't even know where to begin. I also don't want to steal Franklin's thunder since this is his baby.

But I am now totally in love with Woolgathering, so today I'll tell you about the LYS which hosted the shoot. Woolgathering looks like this: 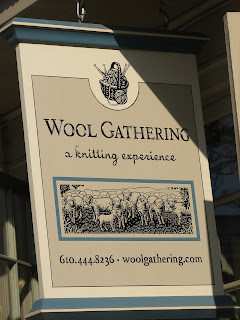 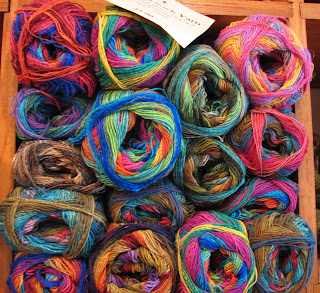 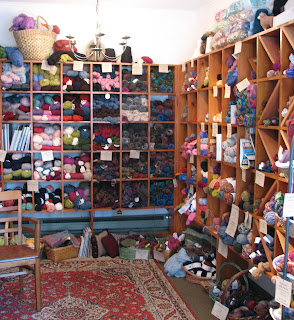 The owner of Woolgathering is Jacqui 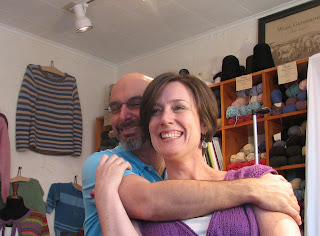 Jacqui is one of those people who give off a gravitational force field of personality. She draws people into her orbit with her humor, warmth and enthusiasm. (I mean, the French clearly invented the phrase "Joie de vivre" for this lady!) You can tell how much the folks around her love her by the fact that she had so many wonderful people helping out, even at 8 a.m. on a Saturday, and when we kept asking these sweet and kindly worker bees "Do you work at the shop?" they all kept saying "No, we just love Jacqui!"

I can see why.

Jacqui has the most adorable Pom rescue dog named Turbo. (as in Addi Turbo) I can't find my photo of this doggeh which totally bums me out, but he is like a walking pom-pom. Fluffy, with a little wolfy face, and so loving. He sat in an armchair with me and just let me pet him. But Turbo, too, has been sucked into the Jacqui orbit and, understandably, had a hard time letting her out of his sight. (By the end of the day, I kind of felt the same way.)

Because we simply do not have enough yarn in our house (right, Tom?), I indulged in a few choice skeins: 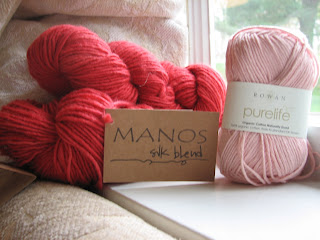 Two skeins of the yummy new Manos Wool-Silk blend, and a skein of the new Rowan organic cotton to swatch with. 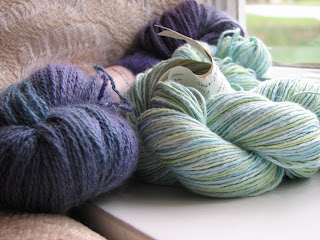 A skein of Jade Sapphire Mongolian Cashmere on the left (Jacqui gave me the most adorable scarf pattern she invented, and I'm hoping to cast on tonight) and a skein of Claudia Handpaints handpainted linen on the right. I want to play with the linen and figure out whether I should start dyeing some myself.

The festivities just keep on coming: today Franklin and I are heading up to New Hope for brunch with QueerJoe and the saucy Curmudgeon: 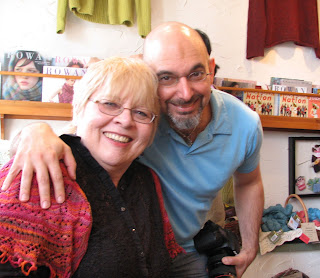 Mar spent a good bit of the day with us and looks great! (Must be the FWF/FWB she's got squirreled away in East Stroudsburg...

By the time we left, between Jacqui's organizational skills and Franklin's charm, I think it is safe to say 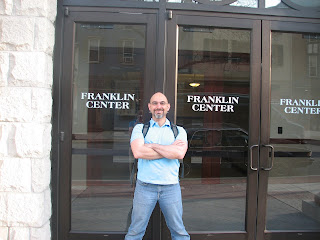 Coming this week: more on the 1000 Knitters shoot and other Franklin-related festivities...

Sounds like a fantastic time! Have fun today and we can't wait to hear more.

Carol...my newest BFF!!!! I am about 1000 shades of red right now (get it,1000 - squee!!). I had the best time yesterday. It's so hard to believe that so many people came through my tiny shop. The best part of the day was most definitely being with you - oh, and Franklin, of course.

I don't know how to begin to thank you for all your kind words. I can't wait to see you soon! XO

The girl kept asking before we came inside if I was very excited. Then I completely froze with stage fright on meeting Franklin and spent the whole time watching my hands shake. He's a real knitting celebrity. I'm sure we spoke but I didn't thank you as much as I should for making this event possible. What a great day, and to find such a good yarn shop that is not local but at least on the way to Grandma's house. Thank you again.

Wait, rosesmam, wait! Email me! I have 2 or 3 beautiful photos of your lovely daughter to send you!!!! goknitinyourhatATattDOTnet

She and you are gorgeous.

Hey, rosesmama, my hands shook knitting that scarf, too! :)

mine were shaking also.

and, contrary to popular belief, I did NOT "used up southeastern Pennsylvania's quota of squees yesterday."

jacqui, thank you for opening your store to us so that we may become history. your knidness shall be repaid.

OMG, this is a SQUEEEE moment---because I've been to the same shop! It's so amazing, and that manos blend is fabulous. SQUEENESS! I love that store.

Yes, I'm am heart-sick at not getting there to meet Franklin, but man, now I'm upset that I didn't get to that yarn shop! It looks gorgeous.

I am incredibly sad that I missed being a part of this great fun. I was at the ballet with my father and could not concentrate on it at all. Would rather have been with my peeps fondling fiber and meeting Franklin!

oh I wish I was there to hear andcount how many times anne marie said "Squee." It was nice to see you again. It has been so long. I definitely had fun hanging with you guys. =)

If I EVER hear or read the word "Squee" again, I'm gonna vomit. WTF thought that one up? Jaysus.

Sorry we missed the brunch but I guess Neal said Squee one too many times, 'cause we both had much bathroom angst. It was joyous to see you, my sweet, and to meet the frabjous Jacqui. This is a yarn shop for the ages. Getcher asses down there. I'll do my entry tomorrow. Had a 36-hour whirlwind tour of Indy. And I'm almost sure I saw Delores hanging out at the bar near gate 14 at O'Hare.