As has become tradition, the kids decorated their scooters and we marched in the Garrett Hill/Rosemont parade. 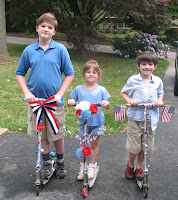 And in honor of the American holiday, I leave you with this knitting-related bit of history:

In Philadelphia, “Mom” Rinker was a tavern keeper whose work put her in the company of British soldiers. She was also a spy. Rinker often spent her days in a town park where she sat up on a high rock, knitting copious numbers of garments. As she knit, she concealed messages in balls of yarn and then dropped them to American couriers below.

Ah, trust you to know about a subversive knitter! What a wonderful bit of history.

What a great tradition. The kids did a wonderful job getting in the spirit.