The rest of the Chicago update

Yes, yes, I am terribly behind, but here is the story of the rest of my weekend in Chicago...

We woke up bright and early on Saturday to a shockingly warm day (it was at least ten degrees above zero). After a delightful breakfast, we jumped on the El (where we spotted some cool knitwear) 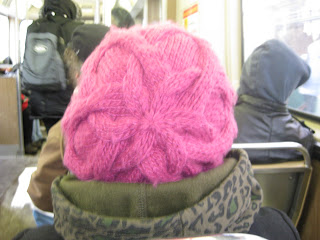 and found ourselves at the Art Institute. 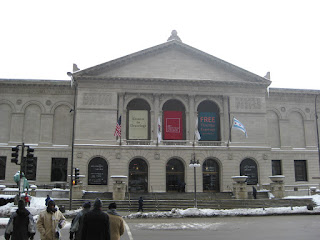 Now I hear tell there's some big painting by a French fellow who was enamored of polka dots, 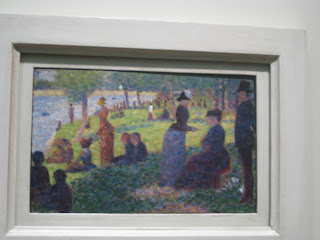 but I was transfixed by the exhibit of miniature rooms (the Thorne miniatures) which so cleverly and so minutely display the history of interior design from the 17th century through the twentieth: 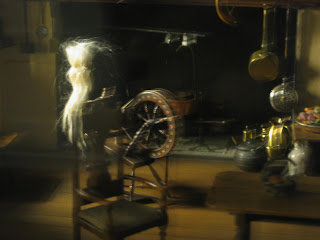 All at the scale of one foot = one inch. (I had to include the above room, even though the photo isn't the greatest, because it included a spinning wheel, complete with fluff.)

Then we drank deeply of the paintings (yeah, yeah, I love the Impressionists and Post-Impressionists, so sue me for being conventional): 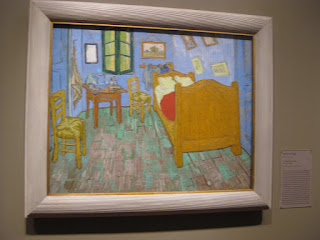 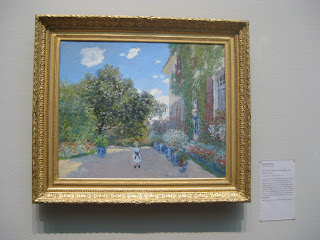 There was plenty more eye-candy at the Institute and Franklin makes a marvelous tour guide.

Then we were off to Loopy Yarns, for a party in honor of President Obama, during which we sorted and counted chemo caps that Knitters for Obama knit and crocheted in honor of the President's late grandmother. 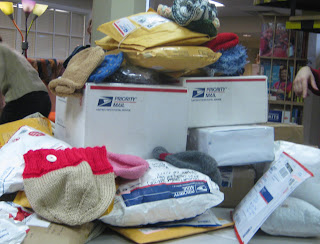 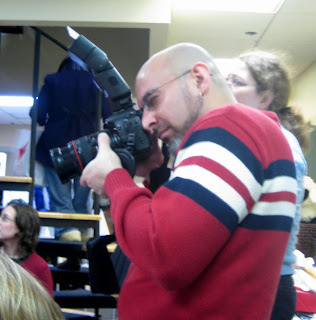 The caps were given to the University of Chicago cancer unit for their patients.

We continued on through Chicago, seeing sights like the water tower, 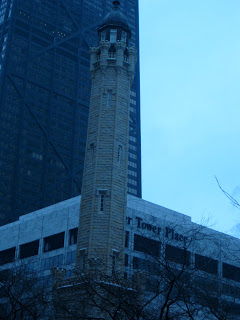 and finished with a visit to the American Girl flagship store, so I could take some photos and pick up a little something for Miss Thang. 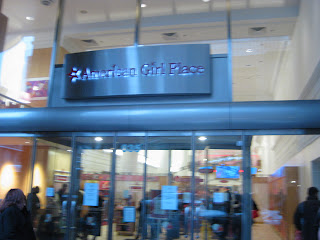 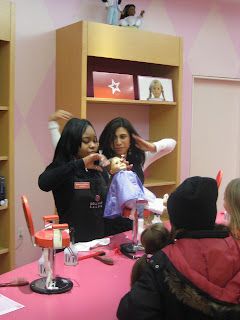 and a cafe and doll hospital and all sorts of things designed to charm the heart of an American Girl doll owner, (including this weirdo guy who made funny faces at the dolls). 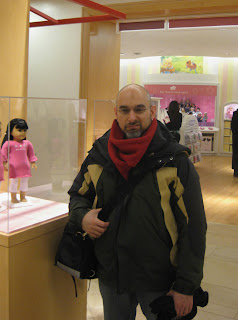 Somewhere along the way we went by Wrigley 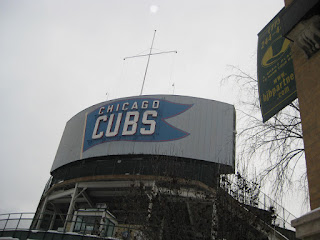 (I expected there to be free Doublemint in baskets by the gate or something, but no, this is just a myth) and we had a lovely dinner with Minjo and VeryBadDogs (from Ravelry) at an Asian restaurant that was way too cool for school (it was so cool we weren't sure they'd seat us since they made clear to us that we just weren't achieving their level of coolness). Then Franklin and I knat, and he even finished his gorgeous twisted-stitch hat 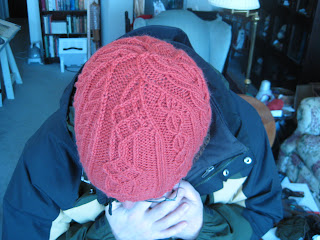 and we went to sleep and had brunch in the morning with more Rav-friends, and then I was off to the airport and back to Philadelphia. Phew. I was left with so many wonderful images in my head: 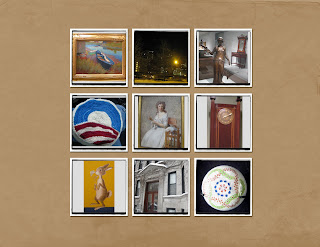 Now, of course I know some of you (Anne Marie from Philly) will want to know what, er, transpired between Dolores and me. I shall tell you only this; when I arrived, this: 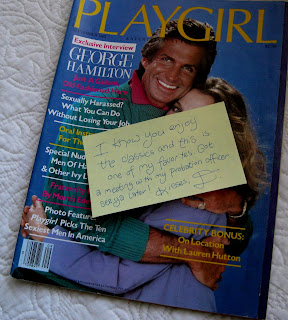 was waiting for me on my bed. As for the rest? Well, gentle readers, Chicago is like Las Vegas in one important respect: What happens there, stays there.
Posted by Carol at 7:06 AM

Awesome pics! Better watch out for those creeps in the American doll stores ;P
What a great cause!

Oh, I love the Thorne Rooms (and keep waiting for Isobel to be interested in them - she's only four). I spent a fair bit of time at American Girl place this Christmas, as Isobel received a Bitty Baby and needed some accessories and whatnot - crazy place.

Playgirl has stopped publication, so I'm guessing that issue is from the last run?

Franklin is a fabulous tour guide through the art institute. I learned a lot about art history from him.

And those miniature rooms are amazing. Did you see the one with the knitting on the needles?

Sounds like it was a great trip in many ways. Ah, the Art Institute - one of my most favorite places, and favorite jobs, I've ever had in my whole life!

toulouse-lautrec is my favorite painter and I KNOW the art institute has some of his work!

did you pet the lions out front?

did you grab a bite at the billy goat tavern underneath the michigan avenue bridge (cheeburger cheeburger!)?

did you go inside the water tower (the only structure remaining from the great chicago fire!)?

at least dolores didn't leave a steaming pile of sheep poo in your bed!

can you tell I have been to chicagoland before? last trip 1996...

thanks for the shout-out!

I LOVE the Art Institute. From the Lions to the O'Keefe. Sigh... bliss...

Sigh. I love living vicariously through you. You do it well.

I was captivated by the Thorne Rooms as well, so much so that my mom bought me the book. Great review of a great town! And the picture of the grumpy man in the AG store is a hoot. Wish I could come to Woolbearers to meet you (well, we sorta met at the Kennett Square 1000 Knitters event, but I blabbered on at you in true star-struck-ninny fashion so I'd like to take a mulligan on that one) but I have to work. Enjoy, it is a great store!