We are careening through December and that means it's time for the penultimate book report of the year. Here's what I read:

by Tana French. I discovered Tana French a few years ago; she's an Irish writer and I really liked her last two mysteries. "Faithful Place" was another enjoyable read. Once I got past the rather unlikely premise (in which a detective basically abandons his current life to immerse himself in the dysfunctional family he's estranged from once the suitcase of a high school girlfriend is found, suggesting she was murdered) I got into the mystery, the characters and the setting. I think this writer has special resonance for me since her characters came of age in the 80s, right around the time that I did.

* by Laura Hillebrand. Hillebrand previously wrote the very successful story of Seabiscuit. While researching the Seabiscuit story, she encountered references to a man named Louis Zamperini, and telling his remarkable story became her next nonfiction project. Zamperini's life is nearly unbelievable and fascinating on so many levels. He grew up in California as, well, pretty much a juvenile delinquent, taking up smoking at age 3 and drinking in elementary school, followed by all sorts of theft and mayhem. He turned his life around in high school, channeling his energy into becoming a world-class runner. He ended up qualifying for the 1936 Olympics in Berlin along with Jesse Owens. His athletic career was interrupted by World War II, and Zamperini became a pilot flying missions in the Pacific. His already-colorful life took an unbelievable turn when he was shot down over the Pacific. He survived over 40 days on a flimsy raft floating on the ocean, and this part of his story will leave you amazed at the human instinct for survival as he and his companions fought off sharks, dodged Japanese snipers and ate raw birds and fish -- only to wash up on the shores of a Japanese-occupied island. The next chapter of Zamperini's story is equally remarkable as he and his fellow POWs struggled to stay alive and to keep even a scrap of human dignity while being treated abominably by their captors.

Zamperini's story is amazing, inspiring, and often heartbreaking but never boring. A terrific read in which you feel like you have to keep reading to find out what happens next even as you dread hearing what happens next.

More Than You Know

by Beth Gutcheon. I stumbled across this novel, and really liked it. It shifts back and forth between the stories of two young couples with doomed romances, set in Maine. Elderly Hannah reminisces about the summer she fell in love with the unsuitable but charming Conary, while the story of Claris --a young woman from the 1850s who defied her family to marry a neighboring man -- is interspersed and provides stark parallels, as well as supernatural ties to the present. Ghostly and suspenseful.

by Barbara Pym. This was a less typical Pym novel, since it was not really finished by the author and was cobbled together after her death by combining two existing versions of the manuscript, but I still found it a very enjoyable look at 1970s British academia.

The Last Will of Moira Leahy

by Therese Walsh. Another book I stumbled over, this is also set in Maine and tells the story of twins Moira and Maeve. As the book opens, Moira is a professor at a small New York college. She discovers an antique dagger which is the catalyst for all sorts of strange things that happen in her life: anonymous notes on her office door, a spur-of-the-moment trip to Rome, and most significantly the unleashing of Moira's buried memories about her past. Another ghostly and suspenseful book that I enjoyed reading.

Running the Books: The Adventures of an Accidental Prison Librarian

* I wanted to like this memoir, written by a young Harvard grad who becomes librarian at a Massachusetts prison, but after a hundred pages or so, I bailed. I thought the book was slow and needed some ruthless editing, but I also just didn't take to the author's voice. I found him self-indulgent and self-pitying, and his attitude toward those around him, both prisoners and others in his life, was rather condescending. Your mileage may vary.

I resisted picking up "The Hunger Games" for a long time, finding the subject matter -- a dystopian North American country that represses dissent and subjugates its people in part by conducting annual games in which teenage children from each province fight to the death -- so dark and violent that I wasn't sure I'd want to read it. But so many people have recommended this to me that I was wavering. Until my middle-schooler read the first book of the trilogy and really liked it. So as he began the second installment, "Catching Fire," I started "The Hunger Games." I wasn't prepared for how quickly the book would suck me in, or the imaginative power of the world the author creates. Although the subject matter is violent, it's presented not gratuitously, but as a lesson against oppression and brutality. My kid raced through the second and third books and I wasn't far behind. A terrific, brilliantly-imagined, vivid set of books that had me captivated. 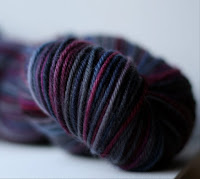 Pastiche
P.S. If you're more in the mood for yarn than books, I just updated the BBF website with some glorious cashmerino yarn in a DK weight. 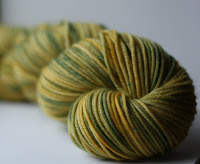 One skein will make a hat with plenty leftover; two would be a beautiful scarf or baby jacket. . .


* means I got a free review copy of the book from the Amazon Vine program.
Posted by Carol at 7:11 AM

I enjoyed the first two Tana French mysteries -- I'll have to check this one out, too. I was a little annoyed by the faux Graeco-Roman undertones in The Hunger Games, and I thought the first book was the best of the bunch, but enjoyed them nonetheless.

You've probably already read Pym's Quartet in Autumn, I suppose, but if not, it's very worth a read! I especially appreciate that it covers characters who are woefully underrepresented in fiction in a thoughtful way.