You weren't imagining things: Blogger deleted my post and so I had to go back and try to reconstruct it as best as I could.

I have a finished object (quilting edition) to show you. This is a quilt I just finished making for Boy Twin. It's not at all the quilt that I thought I was going to make when I began, but I quite like it, not the least because it's the first full-sized quilt I have made. 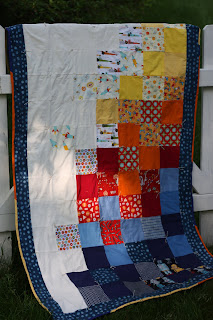 Boy Twin has bunk beds in his room, and it seemed like the perfect chance to make a quilt for him. I had picked up some boy-ish printed fabric here and there. I laid it out to cut squares, and I quickly saw that that the fabrics seemed to be naturally falling into two specific color themes: one was chambray-ish, denim-y blues with red, and the other was brighter with orange, yellow and deeper blue as well as red. I decided to let the recipient of the quilt decide and he immediately picked the brighter colors. Which was good because I really love the space-themed fabrics I got at Spool. 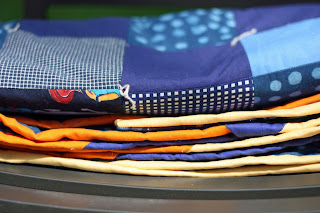 I didn't want to overreach on my first full-sized quilt, so I cut blocks. I was originally aiming for a "scrappy" look, without intending to have any sort of deliberate pattern. It looked okay but didn't knock me out. So I tried cutting some blocks in solid colors -- I had some yellows and orange and red, and added a couple of blues, too, just to see what would happen. I liked it better, but it still seemed a little meh.

I went poking about the Internet looking at quilts and came across a really striking quilt on a Flickr feed (I can't find it now to link to). It used white blocks on one side to set off a sunset-themed quilt, with the colored blocks going from darker at the bottom to lighter at the top. I decided to try cutting some white blocks and seeing if an arrangement like this would work. I ended up adding some darker navy blocks at the bottom, and voila! 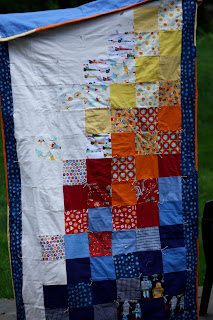 When I had the center blocks cut, sewn and pressed, Mr. Go-Knit-In-Your-Hat weighed in. For some reason he was ambivalent about the white section of the quilt. He strongly suggested a border, preferably in a deep or bright color, to frame off the white. Mr. GKIYH has pretty good judgment when it comes to aesthetics (he married me, didn't he?) so I opted for the dotted frame, which I think works well. 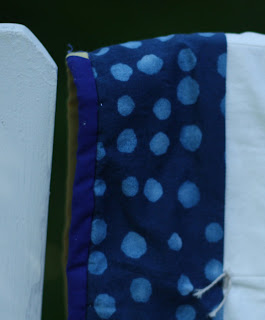 Lest I bore you to death talking about the quilt, I do have to mention one other thing that I think makes this quilt special. I wanted to include at least some piecing on the back of the quilt. After ogling the stuff on Spoonflower, I had a brilliant idea. The twins have been drawing a bunch of comics starring a character they invented called "Fred the Starfish." I surreptitiously scanned a comic, used Photoshop to isolate the individual characters and clean up the lines a little, and arranged them in a row so it would work as a panel. I had a fat quarter printed up and Boy Twin was thrilled to see Fred and friends on the back of the quilt.

I tied the quilt for fear I'd never finish it -- and by this time, Boy Twin was so excited about the quilt, he'd been repeatedly asking me when it would be done. I used a binding with leftover pieces from some of the brightly-colored blocks.

I'm really excited about the finished product and am already hard at work on the next one....
Posted by Carol at 7:52 AM

It's really wonderful! Worth the time to fiddle with the layout.

I LOVE that quilt! Doing the gradual color change was a fabulous idea. Congratulations!

Love the finished product, especially incorporation of the twins' own cartoon characters. Thanks for taking us through the creative process.
- Beth in Toronto