Hard to believe that I've been going to Maryland Sheep & Wool for nearly a decade now. This year, for the first time I can remember, the show shared the weekend with Mother's Day. I don't know if this was a factor, but it seemed as though the crowds were a bit lighter than in the past, although there were still lots and lots of folks by midday.

My ragtag band of yarn hooligans left Philadelphia around 7:00 a.m. I realized how obsessed I had gotten with quilting when I found myself taking a photo of the wall of a Maryland rest stop because I thought it would make a great quilt design: 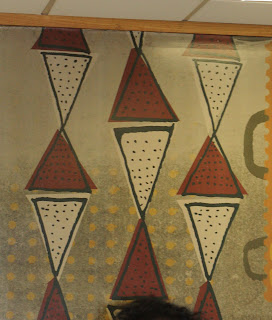 Our trip down was fast and uneventful, and we arrived at the fairgrounds before 10:00 a.m. 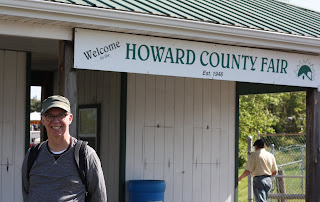 Handsome Jim at the front gate

The weather was glorious: sunny, blue skies, warm enough to be comfortable without a jacket but not hot. One of the things that's been especially fun about going to Maryland has been adding traveling companion and fantabulous designer (and awesome friend) Laura's sister to our band of knitting fugitives. Laura's sister lives in Maryland and meets us at the fairground each year. I've gotten to know her over the years and she's lovely. Even though she doesn't knit, she is an enthusiastic companion. It was great to spend a couple hours joking with her.

When we arrived, it was relatively uncrowded. (Here's a shot of the back end of the midway early in the day.) 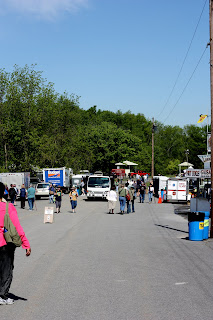 I made my way to the big building at the back, but not before running into Ms. Maleficent Knits herself (Hi, Regina!!) and some of her knitting homies from Maryland: 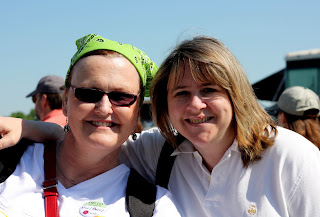 The big barn was loads of fun, and I made my first and only yarn purchase of the day at Woolstock: a full bag of Cash Iroho for halfprice. (Cash Iroha is like that good-looking frat boy you meet at a party: you suspect you won't be 100% crazy about his performance but he's just so pretty you can't help yourself. )* I also had the great good fortune to run into PoorLuci 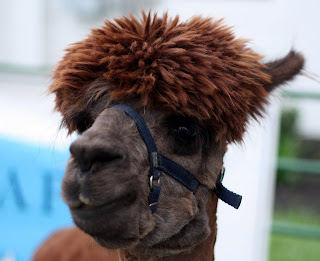 Wait -- that's not PoorLuci! Here she is: 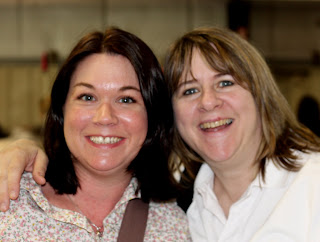 as well as Philly knitting icons Knitty D & the City, not to mention Knity D's mom, a.k.a. the Barb-inator. 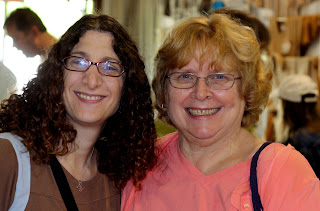 Wendy & Barb; Knitty D wasn't feeling well so we excused her from photo duty
I really didn't have much cash for shopping, so we spent most of the day wandering around looking at the pretty yarnz and snapping photos of cute animalz. It seemed to me that the organizers have been making various changes over the years in response to constructive criticism of the vendors and attendees. For example, in the last two or three years, the number of portapotties has increased exponentially, so if you don't mind using them instead of a regular bathroom, you hardly ever have to wait in a long line to answer nature's call. I saw a noticeable increase in the number of portable ATMs in various spots. There were also new areas where tents for vendors were added, either increasing the overall number or at least spreading them out more to avoid the crowding. All good.

We ran into Rhichard of Koigu fame while exploring one of the expanded sections of vendor space: 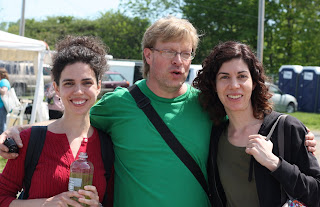 Laura's sister on the left, Dickie, and Lovely Laura

Rhichard is always a hoot and was in rare form that day. I hope he didn't get into trouble in the Auction Tent....(Note to Rhichard: when it said "Shepherd Auction" it means they are auctioning off items FOR shepherds, not the shepherds themselves!)

By about 1 p.m., the crowds were at their height. Here's a midday shot of the crowds: 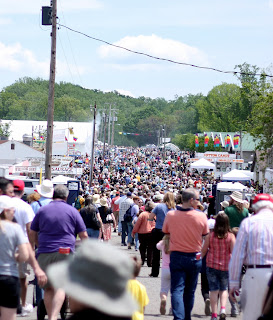 by Sixth & Spring -- it will be out soon and features patterns knit in Noro yarns. I got to see my fair isle earflap hat 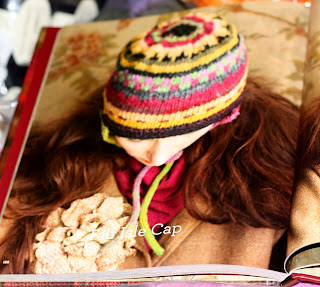 in print for the first time -- yay! 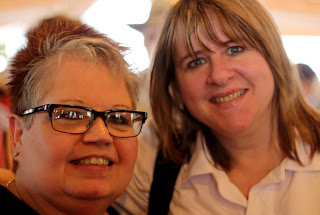 who is always a pleasure to see, and the most faithful blog-reader. BJ and I have been at the same events but not running into each other for a while, so we were both happy that our paths finally crossed. 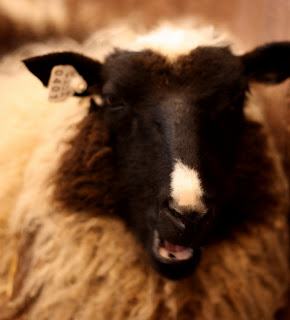 For now, I will leave you with this bumper sticker:

Next post will include a photo montage of some of the pretty things we saw.


* Yarn freaks, I am referring to the likelihood of pilling, given how soft and loosely spun the yarn is. I still love this yarn, though.
Posted by Carol at 7:26 AM

Can't wait for that book...I love your hat pattern and Connor definitely wants one of those hats!

I went Sunday morning and it was lovely. Not as crowded and I was actually able to get into some of the booths. Miss Babs was my downfall.

Your friend PoorLuci looks like a woman I knew years ago. She was a nurse in a children's unit, and knit socks out of thick wool. Can she be the same person?

Glad you had a good time at MDSW and glad you got to meet up with PoorLuci. As for the Cash Iroha, I think if you treat it the way it wants, it'll outperform your expectations (much like the cute frat boy, yes?). I always get sucked in by Noro colors. I never learn.

Gah! I cannot believe that I did not see you! If it wasn't for hanging out with Jim for a bit, I'd think you weren't there. Missed you!

thanks for sharing your pix! all y'all are looking wonderful!

PS - word is 'hukup', as in "what do you do after you have had too much booze to drink? hukup."

I want that bumper sticker!!!

It was nice to see you too!!! We do not look nearly as sarcastic in photos, do we? We look nice, actually. Like Volvo driving, children-picking up, school volunteering, nice people

I want that bumper sticker too! Why oh why does knitting not tone something??