Having just spent several wonderful days with some incredible Brits at VK Live, it is perfect timing for me to show you a book called Stitch London: 20 Kooky Ways to Knit the City and More

, by Lauren O'Farrell (David and Charles 2011).  I recently received a review copy of this book, which was released last fall, so let's set off on another No-Bull Book Review. 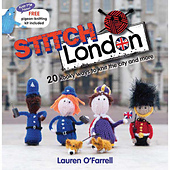 Stitch London is a paperback book, roughly 9 inches square, and it's bursting with color, line drawings, photos and funky design (MSRP $22.99, available for $14.99 through the link above as of the time of this writing). Its mission is simple:


O'Farrell goes on to assure the knitter that her book consists of "squee" knits -- knits that will inspire in the viewer the uncontrollable urge to shout "squee!":  "The patterns aren't fancy-schmancy and they don't require you to be a sage of stitching. All you need is basic knitting knowledge, a willingness to switch on the part of your brain that has crazed ideas and let it run things for a while, and a total lack of yarn snobbery." 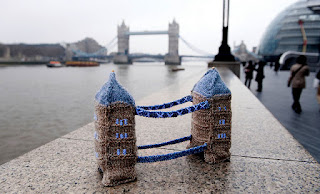 She urges the reader to experiment and riff off her patterns, advising "Grab them by the stitches, twist them, shake them, turn them purple, love them, hug them and call them George. . . . Mix buttons, pipe cleaners, watch cogs, cat hair, glitter glue, beads and all manner of crafty bits togehter with your knitting and see how they get on." 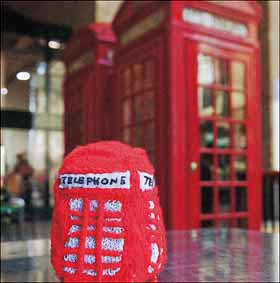 Before launching into patterns, Stitch London provides the reader with some introductory material.  O'Farrell explains her difficulty ratings and abbreviations; lists essential and non-essential supplies; provides some knitting translations to ease the transition from UK to US; gives a needle/hook conversion chart; and (my favorite) provides some London slang. 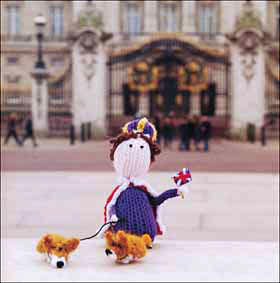 Next up are the patterns.  First chapter is "Little London Landmarks," and provides miniature knitted versions of Big Ben, 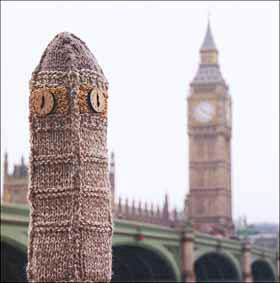 the Tower Bridge, and the characteristic red phone box -- all adorable and charming.  "Little Londoners" focuses on people, from the Queen (with corgis), a beefeater (with black fun fur for the hat, natch), and police officers. 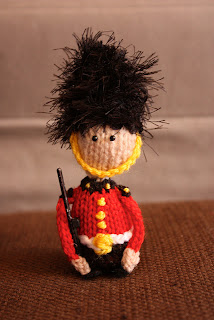 "Rat Race London" takes the focus away from knitted minis to full-sized items -- a scarf with a knit-in pocket for your Oyster card (a transportation e-pass), a book cozy to protect your reading material, and a bag cover (with mulitple versions, including the Union Jack version shown below).  "Work work work" provides you with a laptop cover, in several versions, and mug cozies (also with several versions). 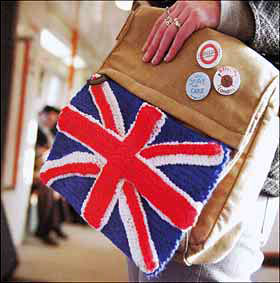 "City Critters" looks at the non-human citizens of London, including Cooey the Pigeon (I think I met Cooey when I was at Trafalgar Square), a raven, a mouse, and a fox. "The Great Outdoors" features a picnic blanket made from recycled plastic bags, bugs (also made from recycled plastic bags) and Umbrella Fellas, little stuffed creatures to hang from your umbrella handle. 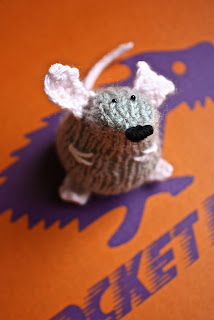 Stitch London concludes with technical information, including about a dozen or so pages on how to knit and other skills (e.g. cast on, decreases, increases). 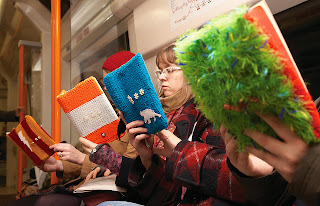 My book even came with yarn, teeny needles and pipe cleaners (for whiskers) sufficient for the knitting of Cooey the Pigeon. (Visit the book's web site for more gratuitous knitted pigeon photos.) 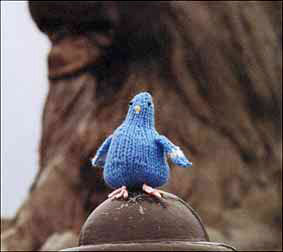 These patterns are all one size or accessories, so other than the designs meant to cover things (like mug and laptop covers), where you'll have to keep an eye on gauge so they fit the object, there aren't any sizing issues. The patterns generally take relatively small amounts of yarn in various colors, good for using up stash and leftover balls. The yarn weights tend to be middle-of-the-road thickness, mostly DK to worsted weight. Newer knitters need to know that O'Farrell has a very loose approach to yarn category, quantity and thickness, and this may cause agita if you are used to following instructions exactly. For example, yarn quantities are given as ounces and grams rather than yards and meters.  Yarn categories are fuzzy; for example, patterns list "DK (worsted) yarn", by which O'Farrell suggests that "DK" is used in the UK for the weight of yarn called "worsted" in the US.  Rather than bicker over it, allow me to suggest that since the vast majority of these patterns are for things that aren't going to require fit in the sense that a sweater does, and since most of them require only small amounts of yarn since they are for small toy-like objects, that you can use small amounts of either category 3 or 4 yarn, depending on what you have.  If you use all the same yarn weight within a single project, you should be okay, although the finished object may end up a wee bit bigger or smaller.  You can also fiddle with changing needle size to compensate for small variations in yarn weight.

To sum up, Stitch London is a breezy, fun book filled with adorable models of various British icons, as well as some patterns for cozies and a picnic blanket and other odds and ends. Most of the projects require relatively small amounts of yarn and are perfect for using up leftover bits. With the London Olympics round the corner, and a new season of "Downton Abbey" on the telly, Stitch London will go down easier than a cup of Yorkshire Gold or a pint of bitter.  God save the Queen!

Lovely. Isn't it wonderful to see so much history in such a small area.

So you drink Yorkshire Gold too? Saw that book and it was darn fun. Oh to go to the UK again.... Great to see you Sunday on my way home.