Knitting Fashions of the 1940s: Styles, Patterns and History

by Jane Waller (Crowood Press Ltd. 2006) contains exactly what it says it does: updated patterns that were originally published in the 1940s, along with historical background and information about the styles and knitting culture of the time period. I discovered this book just by browsing on-line for new releases on a large internet bookseller's website. (The copyright page states that it was first published in 2006 in Britain but apparently it was only recently released in the U.S.) It's a delightful book -- and I'm surprised that with growing interest in vintage patterns (think Nancy Bush's Knitting Vintage Socks: New Twists on Classic Patterns

First the statistics: The book is hardcover and contains 160 pages, loaded with photographs, many of them reproduced from wartime knitting magazines and pattern leaflets, some in color and some black-and-white. In addition, there are reproductions of some magazine illustrations and a cartoon or two to give additional atmosphere. In addition, you'll find over fifty patterns updated for today's knitters to try. Of those fifty patterns (excellent value for a knitting book), my rough count shows they break down into approximately 40-plus women's garments (mainly sweaters, including cardigans, pullovers and twinsets), four men's designs (three vests and a sweater), three unisex designs (depending on taste, you may find a few more), six children's designs (not counting the toys), nine accessories, and three toy patterns. The list price is a steep $39.99 but you can find it for less if you comparison shop, and given the amount of information and patterns, I can't quibble over the list price.

Now let's take a look at content. The book begins with a brief "Knitting Notes" section, which charmed me with its prefatory quote:

the true joy of knitting is only obtained when it becomes a creative craft. The decrees of fashion demand much more than mere utility, so that the knitting art, practised in this way, becomes not merely a pleasing and useful relaxation, but also a genuine means of self-expression.

[quoting Marjorie Tillitson, Knitting Book (1945)]. Waller warns her contemporary audience that knitting fashions of this time were knit using finer-gauge yarns and thinner needles, and although these garments took a little longer to make, they were tailored, featured beautiful stitchwork and other detailing, and remained favorites that were worn over and over again, recompensing the knitter for the extra investment of time. Wise words, Jane Waller.

One of the most valuable features of this book is the historical context it provides. At the very beginning of the book, and before each chapter, Waller reminds us of the social constraints under which 1940s knitters were operating. Women were thinner because there were food shortages and rationing. Women had to make themselves garments because English textile production was focused on providing war supplies and materiel for the men at the front, and because most women had very little money to spend on new fashions or other "extras." Rationing fuel meant cooler temperatures at home, so that warm garments made of sturdy, long-lasting wool were not a luxury. Women of this era tended to know how to knit and sew, and thus could adapt their skills to producing garments for themselves and for the troops. In today's knitting world, full of so many knitters born in the 1970s, 1980s (gasp) or later -- and I ain't hatin, just statin' -- Waller's reminder of what it was like in wartime England gives these patterns extra meaning and resonance.

The remainder of the book is cleverly divided into 7 sections, by subject matter. The first section is "For the Troops," and discusses ways in which knitters provided warm items -- hats, sweaters, gloves, socks -- for the men who were fighting. Look at this charming photograph of a "Shetland lass" teaching a "Tommy" how to knit: 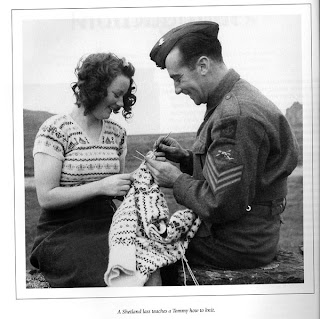 Patterns in this section include a Submarine Jersey, a cabled turtleneck, a cap helmet and a hot water bottle cover. One feature that appears consistently throughout the book is a side-by-side comparison of the original vintage pattern photograph, with the updated item, like this "Women's Service Woollie" (although notwithstanding the name, unless my eyes are misleading me, the contemporary version is shown on a guy): 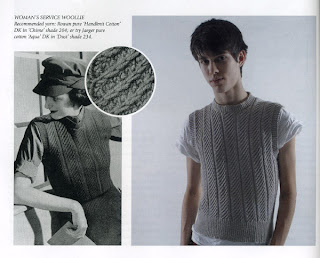 The next section is devoted to "The Home Front," and features mainly garments for women, including cardigans, twinsets, pullovers and gloves, along with two whimsical toys. Look at the lovely ribbing on this sweater: 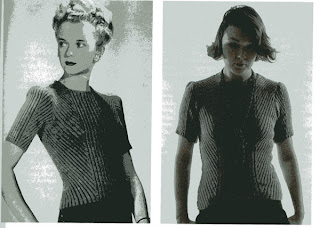 How about these hilarious dolls commemorating the service of the Wrens and other women's service units? 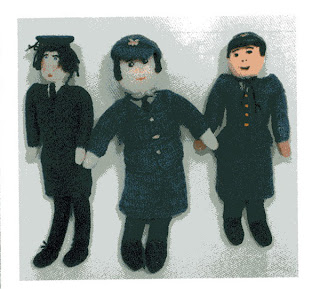 Section 3 is "Glamour," and features more festive creations; Section 4 is "Intricate Stitches," showcasing designs with complex patterning like cables and bobbles. Section 5 is entirely devoted to "Fair Isles," although purists will note that this section really is talking about stranded knitting generally as many of the patterns do not use traditional Island motifs. Section 6 is "The Children" and the last section looks forward "Towards the Fifties."

The sizing is very variable in the patterns. Some give only one size ("38-40 inches," for example), while others are sized for a range (e.g., from 38 to 46 inches by increments of two inches). The yarns used are of finer gauges, DK and sport and fingering weight, even a laceweight lingerie set. The styling is very retro and vintage, and if you aren't crazy about this sensibility, well, look before you leap into this purchase. There are no schematics. I haven't knit anything from the book, but a quick browse suggests that these patterns are written in a more concise style than some of their American counterparts. Just an observation -- not a value judgment.

The skill levels for these garments vary, but I would say they tend to the more experienced knitter. While there are some very basic garments, like the Submarine Jersey, without lots of patterning or shaping, many of the garments feature stitch patterns or colorwork, and tailored fit, so if you're looking for mindless TV knitting, not all of these will suit. One charming detail is that each photograph of a current-day design features the name of the individual knitter or knitters who test-knit it. (And any of you out there who've test-knit for a designer will appreciate this individualized bit of recognition, too!)

If some of the garments don't translate as successfully as others: 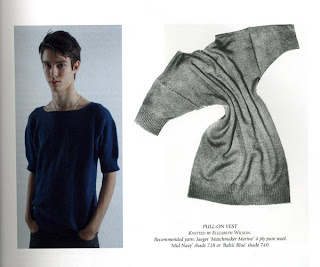 if some of the models and styling leave a bit to be desired, or 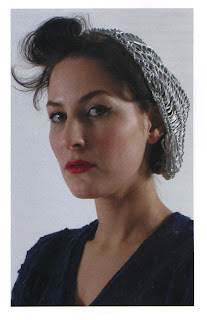 if I may not actually knit every garment in this book (not being a snood kind of gal), well, I'm willing to forgive all that. This is a thorough book, filled with detail and knowledge, chock-full of interesting and complex patterns, packed with color photos and vintage reproductions, featuring garments knit in small gauges (imagine coordinating the knitting of fifty or more garments simultaneously, all knit at finer gauges!). Kudos to Jane Waller. And if you, too, are sick of chunky, funky, boxy, shapeless, knit-'em-in-a-weekend patterns, or if like me, you are fascinated with vintage patterns, you'll want to get yourself a copy of this excellent book.
Posted by Carol at 9:20 AM

Thanks for the heads-up! I hadn't heard of this book, but it sounds right up my alley.

Damn! That's another one to add to my Amazon wishlist!

Sounds like I need to check this one out- thanks for the review.

Sounds really interesting - I love vintage patterns and if there are some with larger sizes, I'm happy. Thanks for the reviews!

My daughter bought me this book for Xmas 2006 (I'm in the UK and it was new out then). I agree, it is lovely as are all Jane's other books but this new one is so beautifully presented. I think the way the patterns are written is pretty normal for many UK patterns. Many old patterns are extremely concise and Jane seems to have been able to make them easier to read than the originals.
She has a website and there is a list of her previous books. http://www.janewaller.org.uk/page8.html
I have a few of them and the Mans Knitting book is a great favourite with eccentic and wonderful patterns among other things. A very talented and helpful author.Thanks for the great review.
Judith

Excellent review. Obviously, this is my kind of book, so I ordered from Amazon ($30.36).

OOh, nice one.
Do you have this at Rosie's, chick?
If so, you may see me tomorrow.

I haven't seen it there yet, but I'd like to see you anyways. ;)

I have this book too - yet to knit anything, but keen to once I end my curretn sock obsession. I think some of the updated patterns would look better knitted at a smaller size for the given model, to give the more fitted silhouette of the originals, but that may just be cos I think fitted knits suit most people better!

Jane Waller has also published several books about women in the services, and about the Blitz etc (with her husband, I think) and I bought these from Abebooks after reading this one - interesting!

great review, BTW, put my own vies better than I would have.

I had not heard about this book. Thank you for pointing it out, and describing it so well. I plan to order it!
By the way, what is in the box? I am soo curious!

Thank you for the review - I'm surprised I hadn't heard of this book before, as it's just the sort of thing I'm into (I have a plastic storage tub full of patterns from the 20's - 60's). Definitely one for the wishlist!

Hi, I work for www.shopyarn.com. Part of my job is to search blogs to find the latest books and shops throughout the U.S.

On shopyarn.com we are going to add patterns and other knitting related books and would like reviews about them. I saw your blog and would like to ask permission to feature the following quote on our site.

"Knitting Fashions of the 1940s: Styles, Patterns and History by Jane Waller contains exactly what it says it does: updated patterns that were originally published in the 1940s, along with historical background and information about the styles and knitting culture of the time period. It's a delightful book -- and I'm surprised that with growing interest in vintage patterns it hasn't gotten more press."

I've got this book, and my complaint is that Jane waller has changed the size/tailoring so much usually the only thing the same is the stitch pattern! Pretty much all of the patterns start at size 38" bust (not good for us 32-34 inchers!). The finished garments are photographed being worn by fairly average sized models and for the most part are swamped by them. On the original patterns the seams sit on the shoulder, but in the updated pattern they are hanging halfway down the arm. Waists have also been removed from patterns so the model looks frumpy.
In updating these patterns, JW has removed every trace of perky cuteness and replaced it with an 80's sensibility (read generic shapelessness)

It's not all bad, one or two are in my size and don't look frumpy, but my urge to find the original pattern is higher than my urge to knit the patterns in this book.

If you can flip through the book before buying. Please do!