If you would like to enter a raffle, then you need to go here to Hyphenated Carol's blog. She is helping to raise money for the Dana-Farber Cancer Institute, a worthy cause indeed. There are fiber-y prizes, including a skein of BBF sock yarn. So help the gal out, willya?

And if you would like to judge a contest, then feast your eyes on the following. Here are the entries for the Midway Contest of the BBF Sock and Fiber Clubs. You get to pick one winner for the Sock Division and one winner for the Fiber Division. The only guideline given to entrants was that the product had to be knit or spun in one of the BBF club monthly shipments -- and everything else was up to the knitter or spinner. Seeing other people's beautiful handiwork is a great thrill for me. I present them to you alphabetically by first name. Polls are over at the right in my sidebar. Voting ends around 6 p.m. April 15th. 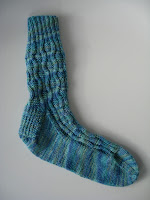 and which pattern is available through Ravelry; it is knit in BBF Bamboo Lite which was the first offering of the sock club. 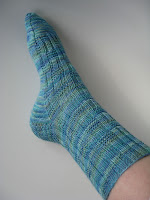 Diane knit her sock in a colorway she renamed "Orchids" because that's what the colors reminded her of: 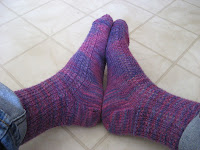 The pattern is WendyKnits' Eyelet pattern, available for free here: 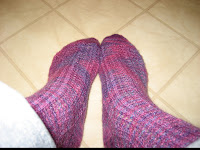 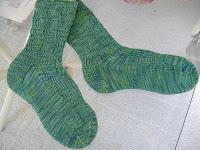 Samantha's socks are lovely and maybe she will chime in, telling us the pattern (she said wistfully): 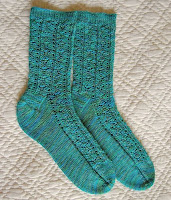 UPDATE: Samantha informs us that these are the Chevrolace Socks from Knitty's Winter 07 issues, available here. Thanks, Samantha!! 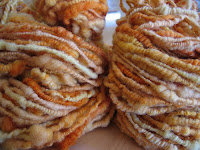 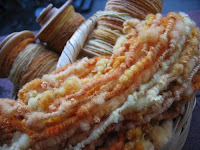 She is also going to spin (or has already spun?) the other half into a more traditional 2-ply and will knit the two together, perhaps in a scarf.

Lorena sent pictures of Month 1 AND Month 2. Month 1 is the Delaine Merino/Kid Mohair blend, in a colorway called Emerald City: 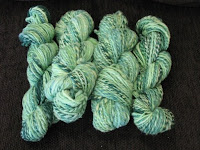 Month 2 was the Superwash Blue-Faced Leicester in a colorway called Velvet Rope: 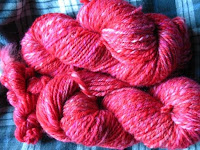 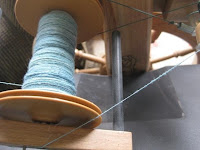 She thinks we don't know that she hasn't finished the whole batch, but, ha ha Mindy, we do.... (it doesn't matter anyway, though, since the "rules" allow partly-finished projects). She's got that fiber nice and skinny, no?

Okay, go over to the two polls at the right, in the side bar, and vote. The winners get some most excellent sock-ish and fiber-y prizes (including BBF stuff) respectively...

The pattern is from Knitty Winter 2007, Chevrolace Socks by Heidi Scheppmann!

All those socks are so nice- it was really hard choosing. Same with the finished yarns.

Thanks for doing the clubs, Carol. I may have to try and find my way into both of them next time...

Thanks for the mention!
Just fabulous to see all the things done with Black Bunny fiber. I nearly voted for someone who wasn't me!