A star in born

Last night was the premier of Elvis' grade-school musical. The show is called "Freedom Bound," about a family from some unnamed European country, immigrating to the US in the 1920s. Here is Elvis in the beginning of the show, as part of the immigrant chorus:

Later in the show, he has a costume change (!) and becomes a German Dancer. They did a very cool dance which involved sitting on wooden benches, then jumping on them and rapping the bottom of the benches on the floor in time to the music. My shots of this were mostly blurry. Elvis got to deliver the last line of the play as Immigrant No. 4. Here he is after the show: 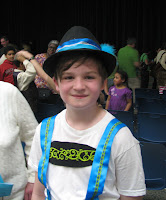 Perhaps my enthusiasm for the show will wane once I've attended three more performances, but I'm a proud mama this morning.

Every child should wear leiderhosen once in his life.

As well you should be! (a proud mama, that is) I bet you'll enjoy every performance- but the getting ready for them may wear thin.

He looks great and like he really enjoyed himself. That child is destined for greatness!

It is so wonderful to watch your kids perform ... I doubt it will get old :-D

Also ... noticed your post on The Tudor books ... have you read Margaret George's novels? Henry VIII and Mary, Queen of Scotland and The Isles. Both are very good (a tad dry here and there, but if you're interested in this time period they are very well done).

Myself, I loved Clive Owen in Elizabeth: The Golden Age. Cate Blanchett, too, but what Eye Candy Clive was in this movie. hee

Some are just born to greatness! Handling dancing, acting and a costume change at a young age while taking it all in stride. Congratulations on such a talented boy!

It looks like he is really enjoying himself, which should be the whole point. I hope he'll be happy he did it after it's all over. Who knows what will be next??

elvis just gets cuter by the day!

What a nice grin!!! Hmm, maybe he'll remember this day (if he becomes an actor)as the day the acting bug got him :) Terry

The more you attend, the more proud you'll be :) He's adorable!

I'm always the mom hitting the people around me and saying, "That's my kid! That one, there! Isn't she great?!" I doubt I'll ever stop being abnormally proud. Congrats to Elvis -- he looks so proud!

Ohmygosh, I was IN THAT PLAY when I was 13!!! (Was the daughter of the two main families.)

Your son looks adorable in that costume. =)