I can finally show you a project I worked on this past spring. As part of Ted's Fiber to Scarf Exchange, I received a mass of Louet Northern Lights top in the mail from a mystery sender. Made of 100% wool and space-dyed, the colorway was called "Marmalade": golden yellow, dusky orange and sage. Part of the fun was not knowing who sent me the fiber and being given purposely vague instructions (unisex scarf).

You have probably heard me say that I'm still a fairly new spinner and when I spin, I need to let the yarn take me where it wants to go (generally it wants to go in the thicker direction) rather than to decide "I'm going to spin a four-ply DK and knit X pattern with it" ahead of time. I was delighted to find that his wool spun very easily. The spinning was fast and enjoyable, and made me feel like a much more experienced spinner than I am, with fairly consistent and smooth singles.

Here's a photo of the singles on the bobbin: 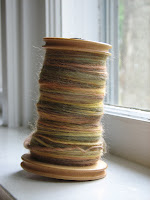 and here is what it looked like after being plied: 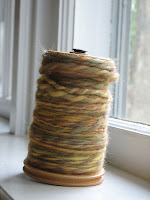 and after setting the twist: 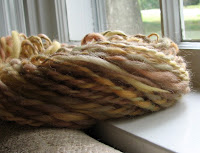 and after putting it into a ball: 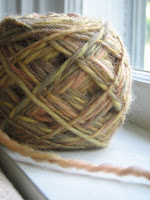 I ended up with a yarn around chunky weight without major variations between thick and thin. I chose the Irish Hiking Scarf pattern by Hello Yarn, making one modification: I omitted one of the cables, so that my finished scarf had two instead of three. I needed to do that given that my handspun was thicker than the worsted weight yarn called for by the pattern.

I really enjoyed this pattern. It was fun and easy to memorize but gave a very professional looking result: 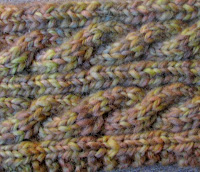 It was especially satisfying for me to do the whole thing, beginning to end, from spinning to selecting a pattern, to knitting the scarf, and to be pleased with the way the yarn came out and the way the yarn looked knit into the pattern.

I was highly amused to see that the recipient of my scarf was (drumroll, please) Ted himself. I suspect he assigned me to himself in case I blew the deadline. Which I did, but mostly because I couldn't find my blocking wires and didn't want to send the finished scarf unblocked. I hope he will forgive my tardiness. It took me a little while to get over the notion of sending my beginner's stuff to someone who spins as exquisitely as Ted, but since I consider him a friend and an absolutely wonderful person, I gave up obsessing over it.

You can see some of the other finished scarves (including the gorgeous one I got from Katherine) at Ted's summary page here. (He has a few more to add, I think, in addition to mine, but I know he's been on vacation and had some computer mishaps so check back in a little while to see the rest.)

All in all, I heartily enjoyed participating in this project and would gladly do so again. I felt a great sense of satisfaction at having done a project from beginning to end and also felt that it was a good way to appreciate how much my spinning has improved over time. A huge thank-you to Ted for doing all the thankless work of collecting roving, mailing it out and keeping us all on track.
Posted by Carol at 1:34 PM

Okay: you can stop beating yourself up about the tardiness thing.

It was luck of the draw that you got my fiber. Nothing to do with any deadlines.

That is such a neat thing that you did! I love that scarf pattern. I made several last year. But never was I cool enough to spin the yarn first =) It looks beautiful. Great job.

Oh that's beautiful!! It looks so soft and smooshy- a very snuggly scarf. The spinning is beautiful- I bet somewhere along the way while you were spinning you realized you weren't even thinking about it- you were just doing it. I think we can say you are no longer a new spinner- you've graduated!

That's gorgeous - the handspun, the colors, the knitting!

That is a beautiful scarf and I love the yarn you created to knit it. This has to be one of the best swaps I have ever seen.

I was just thinking about that pattern yesterday. The name popped into my head, but I could not picture it or decide if it was a figment of my imagination.

As your sycophantic friend, let me say that your spinning has greatly improved since last I saw it. And the scarf was perfect for the weight and the colors, although I truly prefer your hand-dyed stuff to anyone else's, except perhaps Chasing Rainbows.

Now see? That wasn't so bad, was it? Putting your stuff out for the public eye. I'll betcha that if you do this regularly, spin and then put the pictures up here, you'll find you'll get a lot better. I did. It was the fear of public mockery. So DO IT!!