I had planned to post more substantive content this week, but on Monday, when I tried to boot up the computer, there was a weird and ominous message on the screen, and no booting. All the usual fixes in my (limited) bag of tricks didn't work. I debated about whether to try to fiddle with it myself, but one big problem when your computer won't boot up is that you can't use it to Google what the problem is and how to fix it. We figured out a way around that, but Googling only revealed more uncertainty -- it could be a virus, it could be the hard drive, it could be software issues, blah blah blah.

I decided to schlep the thing over to the computer store. As I waited my turn, in a line of equally panicked computer users, all bearing their wounded machines and a look of desperation, an 8-year-old kid sat down next to me, lugging a computer tower.

"What's wrong with your computer?" he asked me in a chirpy voice.

How cute, I thought. Keeping my explanation simple in light of his age, I said, "My computer keeps giving me this weird message when I try to start it up."

"What does it say?" How adorable, I thought. He wants to help me fix my computer and he can barely tie his shoes! (I didn't notice that his shoes closed with Velcro.)

"It says [insert computer jargon here], whatever that means."

Without missing a beat, he says, "Well, it sounds to me like you have a hard drive issue. Have you defragmented it lately? I hope you have up-to-date virus protection," he added sternly.

"Do you know what kind of disk interface family your computer uses?" he inquired solicitously.

"I don't know, it's a Dell," I said, desperately looking to see if the next available customer service representative was free to help me.

"You don't know?" he said in a tone steeped with condescension. "I suppose it's a PC rather than a Mac. Why on earth people continue to buy PCs when the Mac has a superior life span on its stock system, the potential for customization is endless, any disadvantage at symmetrical or pre-emptive multitasking is far outweighed by the intuitiv--"

"Do you like SpongeBob?" was my last salvo, and thankfully I was saved by the cry of "Next!" from the customer service counter.

Although I was given all sorts of dire expectation-lowering disclaimers about their ability to fix my computer, and how long it would take (punctuated by helpful observations and suggestions from the eight-year-old douchebag computer whiz), I was very excited to receive a phone call from a tech a few hours later telling me that he'd fixed the problem with some tweaks to software settings that mysteriously (read: courtesy of Elvis?) got switched.

So now I'm back on-line and, thankfully, did not have to get a new hard drive or computer to achieve that. Tomorrow I SWEAR I will continue with the TNNA update, but for now, having wound about 10 skeins of this lovely laceweight: 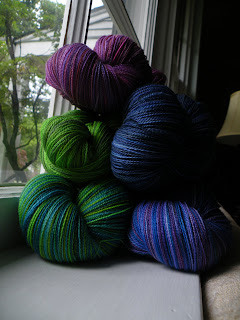 You know, I'm starting to think he has a point about the Macs- everyone I know that has one loves them. (what that means is I'll have to replace all my knitting software when I finally get to get one).

shared with husband, especially love the "I don't know, it's a Dell"!

And have you cleaned up your hard drive of extraneous files (like your Recycle Bin and temporary internet files) and defragmented your hard drive? It will make your computer run faster. Email me privately and I will send you the directions.

Don't let the 8 year old intimidate you; he hasn't learned social skills yet like being gentle to adults who aren't computer geeks.

Ah, the wise-cracking wisdom of children... makes you wanna scream, doesn't it?

Personally, I wouldn't be without my Mac.

I don't need more laceweight either... really don't. Tell me more about it...

In some ways, you're lucky...soon, whenever you replace your cell phone, and you need it to do something differently than how it's delivered, you'll be able to just hand it over to one of your children and say "make it ring like a telephone" and they'll be able to finish the task in 30 seconds.

Me, I have to risk approaching unmonitored quasi-adolescents on their skateboards in the grocery plaza shopping center and ask them for assistance.

Now who's the creepy old guy?

Where do the kids learn this shit? i mean, stuff?
My son is constantly questioning me about doing things with computers and online and stuff and I am so 'tarded in the tech dept. that now I feel like I may be a threat to his technological edumacation!