A few months ago, I started a baby quilt for my friend Kristin. Kristin and I met and bonded on a Ravelry forum; I then became a fellow moderator on that forum and we bonded even more. When Kristin announced she was pregnant, I was delighted and decided that given all my knitting deadlines, I would opt for making a baby quilt instead of something knitted.

Kristen told us that her nursery colors were chocolate and lime. It's a really modern-feeling combination, so I looked for a pattern in my modern quilting books. I opted for the "Blockheads" quilt, from the very cool Dare to Be Square Quilting

by Boo Davis (I read about her in the New York Times a while back and she sounds really fun; she describes her style as "I make modern heirloom quilts just like your metal-loving half-blind Grandma would."). The pattern consists of a number of squares within squares, done in all solids -- except I decided to leave off the faces. (This is a version of the pattern done with the faces in case you're curious.)

I rummaged through my solids and found several limes and some chocolate brown. I had thought about making the quilt in all solids but couldn't resist the chance to use some cute prints, especially since it was for a baby. So I went to Spool, where Laura and Craig helped me find some prints that were very cute and also which read like solids, including a bird print and some fake wood (that reminds me of the side of the station wagon our family had when I was a kid). Having heard Kristin say that she didn't understand why all boy-related baby stuff has to feature transportation, I was very careful to avoid anything with wheels, but I figured fake wood was not too transportation-y (my personal synapses notwithstanding). When I looked at the solids and the prints together, I was pleased. 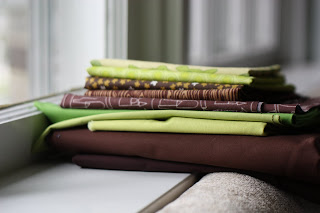 It didn't take long to cut the pieces, and I fiddled around with block placement 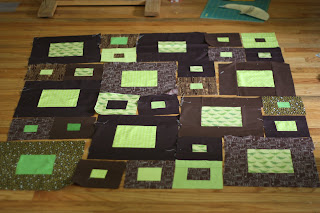 before sewing the blocks together. Once the top was finished, I realized that I had subconsciously made it very brown, so I decided to find a lime-colored fabric for the backing (dots!). 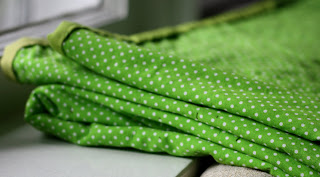 I quilted it by hand, mainly because I already knew how to do it and I was afraid to practice my machine-quilting on a gift. It didn't take that long, though, and I found it relaxing to hand-stitch it. I am not sure my technique is perfect, but it seemed to work just fine. I quilted about a quarter-inch inside each square, and I used green thread on the green squares, and brown thread on the brown. 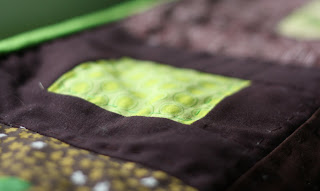 I had originally planned to use the Woody-Wagon print for binding, but the fact that the front was reading so brown deterred me. So I changed my mind, and used pieces of the leftover lime green solids, and added some strips of colors that were a little lighter and darker than lime, but close enough. 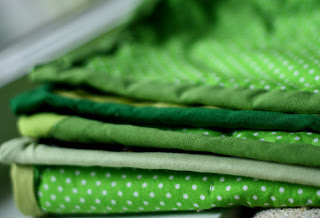 I was very happy when I realized that I had already improved my binding skills since my previous quilt....much more consistent and professional-looking.

I was pleased with the finished quilt, shown here being held by one of my helpful assistants: 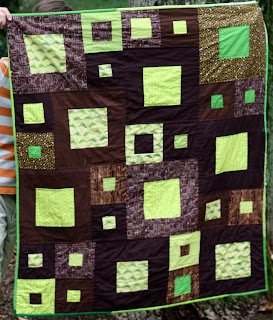 I think the greens are a little deeper and less yellow-y in real life, but the photo gives you a sense for the overall look. Right now, the quilt is winging its way to Chicago to (I hope) be snuggled by its intended recipient.

And I know that I am very sarcastic and ironical most of the time, but it must be said that when working on a project like this, for a cute little baby of a dear friend, I put a great deal of love and hope into every stitch.

like your knitting, this is one very beautiful!!! quilt! how wonderful that you put so much love and thought into it - for sure, a lifelong treasure. knittinnow/aka Terry :)

I love it. I think the colors are just perfect for a wee boy. It looks very complicated and impressive :)

Great job! One of a kind and with love and hope stitched in!

That is beautiful! Thanks so much for sharing. It makes me want to drop my knitting projects and try quilting.

and your "helper" is to be thanked - without him, it would not have been possible to capture the quilt's deliciousness!

Carol, this is so beautiful and special! Lucky Owen