As a quick aside, long-time commenter Anonymous noted that my yarn cost-comparison did not account for the "instant gratification [of] leaving the store w/ yarn." Yes, it's true that there is great joy in swinging a paper bag full of fabulous yarn back and forth as you walk out a yarn shop door, but there is just as much joy for me in expecting a package. The eager glancing at the clock, waiting for the sound of the UPS door sliding open or the postman's little truck, slitting open the box, plunging your hands in to see the new treasures...it's the same mentality that makes Christmas Eve more fun for me than Christmas Day. Some of the following will, undoubtedly, arrive on my doorstep to bated breath in an Amazon.com box.

One of the books I'm eagerly anticipating is Inspired Cable Knits, by Fiona Ellis, due mid-February. 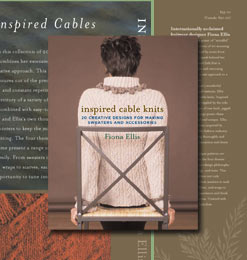 Twenty designs (which is a lot, considering they are all using cables of some sort) by Fiona Ellis, a British designer published in IK, VK, and others. Let's hear it for non-dumbed-down knitting (we hope)!

I suspect Vogue's Stichionary Two (May) will also be a keeper. I've just gotten the first one, and it looks quite useful. (Note to users: I've heard rumblings of some errors in the patterns but haven't personally found any yet, so keep your eyes open for an errata.) You've heard me expound on the value of stitch treasuries before. I do realize that owning one kick-ass stitch treasury can get you a long way (and I have Barbara Walker and Harmony), but I never balk at getting new ones. As I said before, even a minor change in a pattern or stitch count can sometimes make inspiration pop in my mind. Vogue's volume 2 is devoted to cable stitches. From the looks of the cover, the stitches will all be modeled in brown yarn, which may not be the best choice depending on how dark the color is. You may have noticed that some of the green yarns used in the first book don't showcase the stitch patterns to their best advantage, so here's a plea to Trisha Malcolm (she isn't returning my phone messages, the bee-atch): how about, say, light gray yarn for volume 3?

Apparently the word "funky" is still considered a ticket to getting supposedly hip folks to buy knitting books. We've got Funky Chunky Knitted Accessories from Jan Eaton and Funky Knits: Knitting Know-How for Hip Young Things (icky title, innit?) by Carol Meldrum. I might be tempted to take a look at the former, since Jan Eaton's two books on knitted afghan blocks are interesting (and look for a third, on ripple stitches, coming in March), except the publicity shot I found on Martingale's website 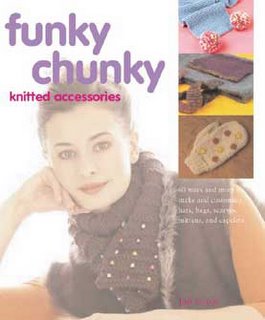 looks unimpressive. See that mitten over there on the right? Doesn't it look an awful lot like an oven mitt? Seems to me that accessories don't take that long to knit anyway, so they don't really need to be that chunky to be funky, and may instead look clunky. Being neither hip nor young, nor in need of funky knitting know-how, I shall skip entirely the Meldrum title.

Nicki Epstein's got Knitted Flowers about to bloom. This is another one I'll have to look through before purchasing; I'm just not sure I need an entire book of knitted flowers for embellishment (can you say tschotschk-o-rama?), but I've got an open mind, seeing how useful her Embellishments and On the Edge books have proved to be. I thought I read something somewhere about her also releasing a felted bags book, but I can't find any reference to it on the internet, so maybe I made that up.

Knitting Out of Africa, by Marianne Isager -- If I am not mistaken, our own blogger QueerJoe owns this book in the original Danish. It's being released in translation by Interweave Press. The book finds inspiration in African baskets and textiles and the designs incorporate a variety of techniques -- stranded knitting, domino knitting, intarsia, and more.

The cover for Knitting With Ribbon Yarn by Rowan designer Tracy Chapman (who I assume does not have a "Fast Car"), looks intriguing, and this is a subject I think hasn't been explored adequately. Other than scarves and tank tops, I'd like to see some real thought given to the unique properties of ribbons of different kinds, and how to showcase them. This book is being released by Trafalgar Square, an imprint which has published a lot of Rowan designers (including Debbie Bliss), which is a good sign.

Getting Started Knitting by Jennifer Worick is a book I'll definitely buy. Not because I really need another beginner's book, but because I know the folks who did the project designs and having seen some of the designs on the needles, I suspect the book will be worth it for the patterns.

One-Skein Knitting, by Leigh Radford, is another idea whose time has come. Who hasn't got a spare ball of some kind laying around, whether intended for a project later abandoned, or left over from a larger project, or something that appealed because of color or texture or softness, but now sits unexplored because you're sick of scarves, scarves, scarves? 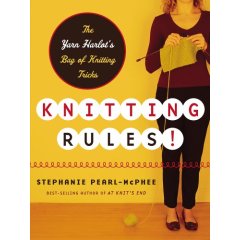 out around March 1st. I was fortunate enough to meet the blogosphere's own Yarn Harlot when Stephanie signed books at Rosie's Stitches East booth, and she's as funny and delightful in person as she is on her blog.

Last but not least is Big Girl Knits, by Amy Singer and Jillian Moreno, out in April. 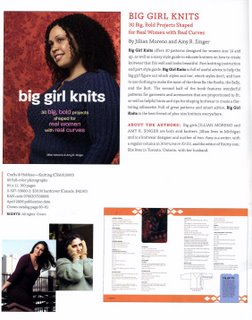 Dedicated readers will know, perhaps stifling ennui or frustration that I'm mentioning it again!, that I have a pattern in this book. As my first published-in-an-Amazon.com-type-book pattern, this fills me with tremendous pride and excitement. I do, however, think that this book is likely to be a winner apart from (or do I mean "notwithstanding"?) my meager contribution. Amy and Jillian worked very hard to create a book which does three things for plus-sized knitters: (1) gives them patterns in an extended range of sizes, (2) makes those patterns contemporary, stylish and body-conscious, rather than flowing tunics to try to hide curves, and (3) makes the garments customizable to fit differing body types.

Because you, my dear readers, are so very special to me.
Posted by Carol at 10:22 AM

Yes- for knitting's sake, do all the previews your little heart (and fingers) can stand! A spring yarn preview would be GREAT!

Got a box yesterday- lace weight and lots of ring markers- they tend to disappear faster than I can cast on enough stitches to need them (gotta wonder what the little people do with all those markers...)

Amazon lists "Morehouse Farm Merino Knits: More Than 40 Farm Fresh Designs" coming out April 25. Do you think it will contain new designs or reprints of the kits found on their website?

Even though it's not exactly going to benefit me directly, I was pleased as punch to hear about the Big Girl Knits book. High time for it. I thought men, in general, had it bad where lack of patterns were concerned until I realized how many knitters in general didn't have good patterns to knit with because of a lack of sizing - and beyond that, design for shapes other than "standard."

Am enjoying your blog and LOVING the book reviews. Please keep them coming.

I am loving the book and yarn reviews - please keep it up! I really enjoy your blog - very entertaining and informative. Keep up the good work.

Yes! Do post more previews. I'll be opining on some of these books on my own blog.

As someone on a tight budget and due to lack of adequate local stores your reviews are helpful. The reviews help me decide what is worth ordering. I don't mind supporting local stores and will ask them to order it if it is not in stock. However I do want to buy what gets ordered for me not just so I can flip through it and decide I don't want it. I have only recently started knitting and definately need to build my library.
Teresa

Caro-
Hooray!! So do we get a preview of what sort of garment you have created, or are you building suspense!?!? Can't wait to see it, I'm sure it's gorge.
xo,

I can't wait for April! Big Girl Knits will definitely become part of my vast knitting library. I'm with Franklin.............it's about time!
Michelle from Massachusetts

Thanks for supporting my book.

Yeah, keep the previews--they are helpful.

I look forward to the "big girls" book, but I have to admit, I hate the name as much as the Hip Young Things name. I am not a big girl--I barely hit the 5 foot mark, with a very large chest and I am FAT. Yes, I said it--I am fat. There is nothing wrong with that, except maybe to myself. Is big really a better term? Fat Girls Knits--now that is a title I could respect. Some skinny publisher feels that saying FAT would be offensive and picks Big....please, spare me your kindness

Had I been consulted on the name, I, too, would have opted for something else. For a cheap laugh, see http://www.girlfromauntie.com/journal/index.php/2005/skinny-chicks-of-the-world-unite-and-gang-up-on-your-not-so-skinny-sisters/

I agree with Mindy- I would love to see what yarns you are looking forward to this spring. I love your "Top Ten" lists, and look forward to them. Thanks!

More..More..More. I am enjoying the reviews. I have several new knitting books from Amazon headed my way--you gotta love those Christmas gift cards.

It really is helpful to get another perspective on the knitting books than just the standard Amazon reviews.

Always look forward to reading your blog...such good info. Thanks, and please continue with both book and yarn reviews.

I love me the books too and am sometimes too easily impressed by a cool cover or a big name. I vote for more previews. I'm not sure I'm buying the we're "so very special" bit though.

I'm danish and have knitted a LOT of Marianne Isagers designs, and I just hope that the english book aren't as full of errors as the danish one, and her other patterns. She's a faboulos designer but a very bad patternwriter!!! So look out for the mistakes in the patterns BEFORE you start knitting, or you'll be in for some ugly surprices:O)