Imagine my delight when my children and I stumbled across this very rare Curious George book in a dusty trunk in the corner of the attic. I hope you enjoy it as much as we did.

Curious George Goes To A Brothel (with sincere apologies to H.M. Rey) 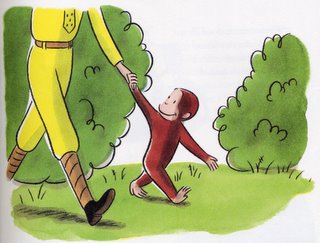 George was a good little monkey and always very curious. One day, the man with the yellow hat had a surprise for George. "We're going to find some hos, George," said the man. George was not quite sure what "hos" were. Were hos good to eat, like chocolate candies? 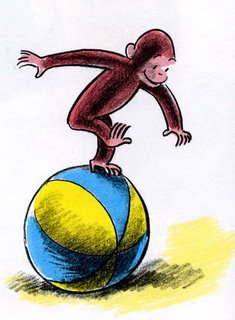 Were hos fun to play with, like a new ball? George hoped so. He followed the man with the yellow hat out to the blue car.

The man with the yellow hat drove with George to a part of town that George had not seen before. 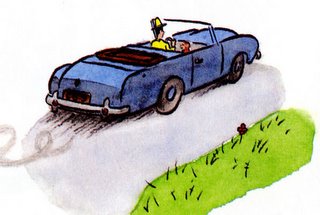 They stopped on a dark street, in front of a very big house with a red light glowing out front. George wanted to stay and look at the light -- was there a fire truck coming? -- but the man with the yellow hat hurried him inside.

"Stay right here, George," said the man. "And please, don't touch anyone--er, anything and don't get into any trouble!"

George sat down and looked around him. He had never seen such a fancy room before. There were rugs that felt soft between his toes, and long velvet drapes, and red sofas covered in velvet. 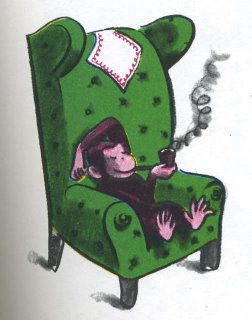 "Hey sailor! Is that a banana in your pocket or are you just happy to see me?"

George looked up. It was his old friend Betsy! George was happy to see her. George climbed up the sofa and jumped onto the chandelier (monkeys are good at jumping). He was just about to hop into Betsy's lap when the door opened and a mean-looking lady hurried into the room. "Get down from my frickin' chandelier, you &*$%&*# bag of fleas!" she said to George. 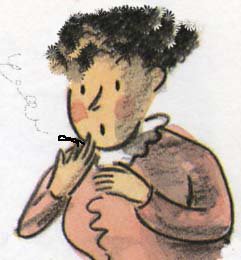 George was happy that the mean lady was gone. He tried very hard to sit quietly on the sofa and stay out of trouble, but it is easy for little monkeys to forget. Suddenly George heard a noise coming from behind a door. 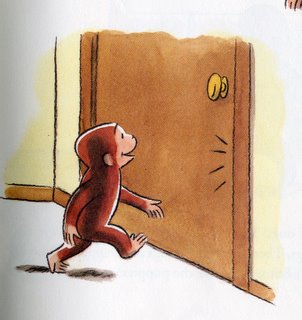 George was curious. What was making that rhythmic banging noise? George moved closer to the door. Now he heard a lady saying, "Oh, oh, oh." The lady must be in trouble, George thought, and he opened the door to see if he could help.

It was George's old friend, the Mayor!

But the Mayor did not look happy to see George. And why were his pants down around his ankles? "My re-election campaign!" said the Mayor. "It's ruined!" As quick as a wink, the Mayor pulled up his pants and came running after George.

George felt bad. He had not meant to surprise the Mayor and his friend. He thought the moaning lady was in trouble and only wanted to help. And he hadn't meant to ruin the Mayor's "re-election campaign," although George wasn't sure what that was. But the Mayor looked quite angry. Would he put George in jail? Would he send George back to the jungle? George did not want to wait to find out.

George ran down the hallway.

He saw a door at the end of the passageway, so he pushed it open. It led to a back alleyway. George quickly slipped through the door -- but wait! What was that buzzing sound?

George had set off the emergency exit alarm!

George hid behind a garbage can. What a scary day this had been! George had just decided that trying to find hos was not a treat at all, when he noticed all sorts of people running through the back door he had opened. There was the Mayor, and the mean lady with the cigarette, and Betsy, and the man with the yellow hat.

At the same instant, George heard the sound of police sirens. He peeked around the garbage can and saw five police cars pull up to the front of the house. What fun! George loved police cars. George slipped out from behind the can so he could watch. He heard a policeman yell "This is a raid!" 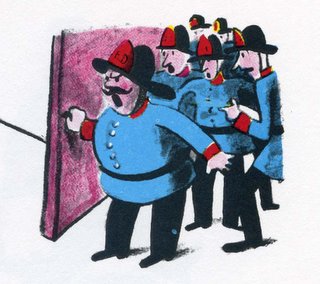 "Hold on," said the Mayor. The Mayor was smiling down at George, a kindly twinkle in his eye. "You may have opened my door at the worst possible time, but you got me out of that place just before a police raid! My re-election campaign is saved!" The Mayor shook George's hand. 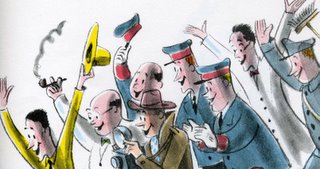 George was happy that he could help the Mayor. As the man with the yellow hat drove them home, George decided that he would rather have ice cream than hos any day. 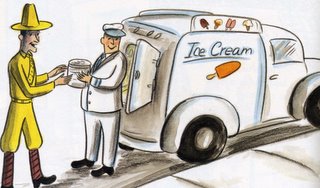 OK, You fucking slay me.

Oh my dear father in heaven. You are some big funny skank.
And don't I love you more than anyone I know.
You win every category in those Knibbies in my book.

What readers without small children may not know is that the publisher of the Curious George ouevre has been turning out numerous faux CG books since the mid-90s (presumably with the permission of H.M. Rey's estate) with some cheesy tag-line like "inspired by the books of H.M. Rey". Artwork looks the same and the basic story formula (George visits new place, gets into trouble and is yelled at by adults, then unknowingly saves the day) is followed slavishly. Mr. Rey died in the 50's after producing only about 8 original Curious George stories.

These faux volumes include such page turners as "Curious George Goes to an Ice Cream Parlour" and "Curious George and the Pizza". (Our kids love the fake books as much as the real ones so what do I know?)

Yep (she said with a little sigh of love), that's my husband. Ain't he swell?

Except I might point out to the other members of the patriarchy that "H.M. Rey" is not merely Mr. Rey, but stands for H = Hans and his wife M= Margret. She wrote the stories and he drew the illustrations.

Work of art! I wanna see George visit the crack house. I really enjoyed this.

Ooh, I vote for George exposes his festering thumb, caused by an "Oriental" manicurist.
And George suffers for three years with dizziness from having a CT scan.
George has a colonoscopy?

Curious George becomes President? Oh wait, we already have a monkey in the White House.

OMG, this is hilarious!!!

Have you seen the new one, "Clueless George Goes to the White House"? Several copies were exchanged at our family Hannukah gathering.

omg that was hilarious. thanks for making me laugh

My daughter loves George, though I think she'll need to be a tad older before she reads this one.