You've got to read this book

I just finished reading a new non-fiction book, Self-Made Man, by Norah Vincent. Norah is a respected journalist who has written for the New York Times, the L.A. Times, and the Village Voice, among others. Interestingly, she is generally regarded as a conservative or "right-wing" columnist, and I am generally regarded as a progressive or "liberal" -- but politics, at least the tawdry, Washingtonian kind, aren't at play at all in this book. Full disclosure: Norah's wife Lisa is a friend and frequent commenter here. I've never met Norah (I hope to, but apparently she's going to be spending a lot of time hobnobbing with the likes of Catherine Crier and Stephen Colbert, so she may not have time for small potatoes like me...).

Norah was watching a reality TV show in which contestants dressed in drag and tried to "pass" as the other gender when she had the brilliant idea of exploring what she calls "the deeper sociological implications of passing as the opposite sex." The only way she could do so effectively was to turn into a man. Not permanently, via operation (ouch!) but for an extended period of time, via Ned. 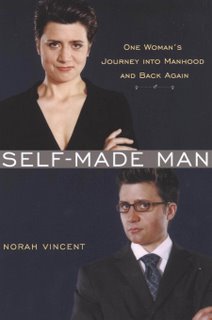 Ned became Norah's male alter ego, for lack of a better phrase. She learned how to dress like a man, how to suppress her obviously female body parts and even more obvious personality traits, how to speak in a more masculine way (both in timbre and in style of speech) and a host of many other things that enabled her to effectively pass as a male, even in intimate settings with other men. Self-Made Man is her thoughtful and entertaining chronicle of what happened next.

It would have been easy for Norah to play this for cheap laughs. But this book ain't a butch version of "Bosom Buddies." Yes, the book is an engrossing read, amusing at times, often laugh-out loud hilarious. Yet Norah repeatedly takes her experiences and applies a powerful intellect, analyzing what her interactions have to say in a larger sense about gender, gender roles and sexuality in turn-of-the-millenium America.

It also would have been easy for Norah to display more of an, well, attitude toward the men and women she encountered during her time as Ned. It is a great credit to her character that she describes the people she met, and often became friends with, in graceful, sensitive and loving terms. She seemed genuinely anguished at having to begin these relationships with deceit and genuinely touched when so many responded to the force and attraction of her personality, no matter what gender it came packaged in.

I had to stop from time to time to reread sentences to admire a particularly well-crafted turn of phrase, or so that I could pause and ponder some of the fascinating points Norah raises. At a few points I even put the book down and let my mind marinate upon it for a longer time -- although I quickly picked the book up again out of selfish eagerness to read more and more.

I'm reminded of a quote from the movie "Tootsie," in which Dustin Hoffman tells Jessica Lange "[I] was a better man with you as a woman, then I ever was with a woman as a man." What is so fascinating about Self-Made Man is that we see how the men Ned interacted with became better men with Ned as a woman, and how Norah became a better woman after spending time as a man.
Posted by Carol at 10:18 AM

What I want to know is if Norah clues us in on how they walk with all those dangly bits?

You'll have to buy the book to find out about Ned Vincent's John Thomas.

I'm definately going to read this book. Thanks for the post, Carol.

Norah didn't have much trouble managing ol' Sloppy Joe--it's easier than you think. Many thanks for the generous and thoughtful post, Caro. We can only hope that the reviewers are half as openhearted.

I ordered mine from Amazon and I guess I won't get it until at least Friday. Sigh.

Thanks for the review. I'm really looking forward to reading this. And fuck the reviewers if they don't like it, Lisa.

I'll be picking up my copy at a book signing at the rate Amazon is shipping.

I can't wait to get my hands on a copy as well. For some reason I had it in my head that the book didn't come out until the 20th... Apparantly I am still living under a rock. Thanks for the recap and assurances that it is indeed as fascinating as it sounds!

I think the actual release date is the 19th, but for some reason I was able to get a copy shipped via bn.com.

Sounds like an interesting book . . . will have to take a look at it sometime.

I've been eagerly anticipating the release of this book too, thought I still had a few more days to go before the release though. I'll have to pop by the bookstore tonight and see if it's in. Thanks for the excellent review, it further whets my appetite for the book.

Thanks for the review- its going on the "must read" list.

THis is the third blog I've read that highlighted this book -- I'm looking forward to reading it.

It does rais one question in my mind...how would the book/public reaction have been if it had been a man taking on a female identity? Everything else the same, just gender switched.

As a man who knits and cooks and doesn't conform to gender stereotypes, I nevertheless am fascinated by the subject of this book and the interesting premise behind it. I guess I'll have to hit the bookstores on the 19th.

Hi Carol (and everyone who reads the comments section of Carol's blog).

Reading this entry reminds me of my own upbringing. Although it was never stated, my parents raised me and my three sisters to be a good people, gender notwithstanding. Raising their son to be a "man" or their daughters to be "ladies" (let alone "wives") was never their concern. They just didn't want their kids to be jerks.

Welcome, John! John has known me since I was about 6 years old. He is an extraordinarily talented writer, photographer, and blogger, among other things.