Looking back and looking ahead

Before I put to rest the family war stories, I do want to explain that when I write about my family using the time-honored dark humor device, it's a way for me to process how bizarre I find my biological family and how ill at ease I sometimes feel around them. It's very disconcerting to be treated like a freak beamed down from outer space by the people who, in theory at least, should know you best in the world. Telling humorous stories helps me reality test and, truth be told, helps me deal with my disappointment that I don't have more fulfilling relationships with these folks. And I do greatly appreciate your supportive comments and fellow war stories.

On a more positive note, I will tantalize you with visions of upcoming knitting books we should be seeing in 2007:

Lace Style, from the Interweave gang, is the next installment in the popular and well-done "[Fill in the blank] Style" series. Word on the street is that fall 2007 will bring Folk Style, with ethnic inspired designs. Yay. 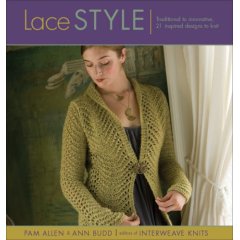 Also coming from Interweave is Favorite Socks, which features 25 "timeless" sock patterns from the magazine. The title suggests the patterns are mostly or all repeats of stuff that has been published before, but we'll see.

And No Sheep For You, by Knitty's Amy Singer, showcases non-wool, non-animal-derived fibers, like cotton and bamboo and hemp. (Well, except for silk which is animal-derived, or at least insect-derived.) Amy was inspired by her own allergies to wool and similar fibers. (Um, in case you were wondering, my design submissions were resoundly dinged from this one. But you know me: I don't hold a grudge.)

I almost crapped my pants when I saw that there are two, yes, two (2) books devoted to punk knitting that will arrive in coming months. Pretty In Punk arrives in the spring 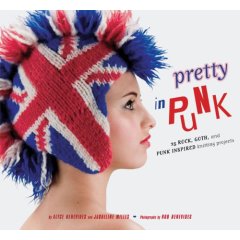 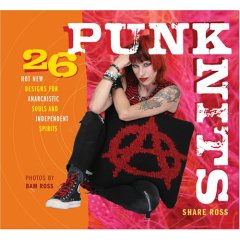 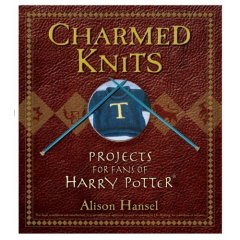 Deb Stoller is working on two further installments in the S-n-B series: I believe the first book is devoted to more advanced techniques, like color and intarsia and cabling. (Um, in case you were wondering, my submission was dinged from this one, too. But you know me: blah, blah, blah.) The second -- which may not be out until late in the year or early in '08 -- is aimed at knitting for guys, both boys and men. (Um, I've got some submissions in for this one, but, well, let's just say I'm not holding my breath.)

Finally, I was pleased to see three top-notch designers with books coming out: Jean Moss has a book called Couture Knits; Kristin Nicholas has Kristin Knits; and Joan McGowan-Michael has Knitting Lingerie Style.

So there's plenty to look forward to on the knitting book horizon.

If there is anyone out there who would like to do some test knitting for me, please shoot me an email at goknitinyourhat {at} att [dot] net. This is a paying gig. If you can tell me a bit about what your knitting experience is and any particular types of knitting you especially like or are good at (e.g., cables, lace), that would help.
Posted by Carol at 11:10 AM

I'll be watching for the punk knitting books so I can borrow them from the library or something. I love looking through books thinking "what the hell?"

It's nice to see I am in good company with the D.S. rejection. Being an optimist, I am waiting with baited breath (probably baited for rejection).

I've discovered the plus side of nutso families...it makes it almost a breeze dealing with those strange people you meet in real life.
Barb B.

I just saw recently that Lace Style was due out in February. I've enjoyed the other books in the series, so I'm kinda looking forward to this one. I wish there were some preview pictures available, so we'd know if the patterns were for garments or shawls or whatever though.

It's just a matter of time until my 17-yo son sits down with me and learns to knit. I'm thinking that the punknit books are gonna do it.

Is that Mohawk hat-thing with the Brit flag unbelievable?!

I actually potentially prefer that punk book to the other.
I don't like the way "Share" is looking at me and certainly hope she's got a few more interesting ideas than that black intarsia pillow on the cover.

That's not Share Ross on the cover, and there will definitely be more going on than intarsia pillows! She's been working on the book for quite a while now and shot an episode of Knitty Gritty with patterns from the book (http://www.diynetwork.com/diy/shows_dkng/episode/0,2046,DIY_18180_43416,00.html), no word yet on when it will air. Whether you'll find her designs interesting is bound to be a matter of personal taste, but I can say that she's very much in the spirit of DIY punk and letting things happen. She has also just finished knitting a cardigan for her soon-to-arrive grandbaby.

I'm really looking forward to No Sheep For You, as it will be about working with the features of the non-wool yarns (there are days when wool doesn't work in the tropics, after all).

I agree on NS4U, esp since a lot of the fibers are relatively new in the knitting world (at least in terms of being readily available in commercial yarns) -- bamboo, hemp, etc.

I agree with Kathy. I kind of find the mohawk/hat/flag thing interesting. Not exactly something I'm going to make and wear mind you. I think it's a good choice for a cover for the theme, and I respect the colorwork/more advanced technique used. It makes me want to check it out.

I'm intrigued by Lace Style - I love Ene, and that poncho thing in wrap style - but on the other hand, it could go horribly wrong - I think I have enough to keep my busy until February.

By the way - will test knit for yarn!

I hope Debbie sees the light and puts something of yours into the men's book. Of course, I'm biased, since I think you're groovy. I have to say, I'm tickled that she's doing a book for guys in the first place.

My take on the punk knitting books is that it's a good thing. When you have a craft that can support so many different branches it means that craft is vigorous and flourishing.

Also, take the earflaps and the fauxhawk trim off that Union Jack cap and I would absolutely wear it. Seriously.

Carol,
I just wanted to comment on your Thanksgiving - It's nice to know that someone else has insane relatives (even if mine just watch Faux "news" and listen to Rush).

Eeeep. You and I, we must be drop-ins.

Great books to look forward to. If I didn't work, I would jump at test knitting, but I still kinda suck. Good luck with fam thing. I understand how that can be. You should self publish, why wait for someone else?

Does anyone else think it's ironic that a book of patterns is written for "Anarchistic Souls and Independent Spirits"?

Yes. Especially if the best the anarchists can produce is that dopey (ooh, black, edgy!) intarsia cushion.

Exactly what is that symbol, anyway? Is it some kind of satanic thing?

Because y'all sure are brave, mocking the devil-worshippers.