I am lucky to have access to an amazing LYS, with an extremely knowledgeable and creative owner. Frequently, the shopowner creates patterns and gives them to customers free with the purchase of the yarn. The patterns tend to be smaller items, relatively easy and quick to make so they are useful even for inexperienced knitters, and are a great way to try out a new yarn with a relatively small investment. These kinds of patterns were the inspiration for Judith Durant's One-Skein Wonders (Storey Publishing). 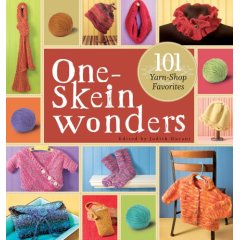 Durant has collected 101 such patterns from yarn shops and designers throughout the country, organized by the weight/gauge of the required yarn (bulky to fingering weight, plus a separate category for novelty yarns, and even a separate "worsted mohair" category). This method of organization makes sense: if you want to use up a skein of worsted weight yarn, you can flip to page 61 and find twenty possibilities that knit at around 5 stitches to the inch. Because of the one skein limitation, most of the projects are for accessories -- there's just not enough yarn in a single skein to make, say, an adult sweater. My rough count showed the following breakdown:

and a whole bunch of random stuff, including 2 (!) sets of coasters, 2 (!) barettes, napkin rings, curtain ties and an ice scraper mitt (don't ask).

These patterns are definitely on the simpler side, and would be suitable for most beginner or inexperienced knitters. Most look like they would knit up in a night (in some cases, an hour), and Durant definitely anticipated that readers would make some of these quick-knit items for gifts. She also anticipated that these patterns would act as stashbusters: if you've got an orphan ball of yarn left over from another project, or was tempted to try a ball or two of a new yarn to see if you like it, then these easy and fast projects will help you figure what to do with those single skeins.

Given the number of items of the same kind, there's inevitably a feeling of sameyness about the book. There's only so many ways you can knit a hat using a single skein of yarn, and when you present twenty-five hat patterns in one book, there's bound to be some overlap. Likewise for scarves, and envelope bags, and drawstring purses, and so on. From a design standpoint, there isn't much in the book that I haven't seen before, although I confess I've never before seen an ice scraper mitt. As I mentioned before, this may be a function of having a top-notch LYS that provides its customers with ample free patterns -- many of them, in this knitter's humble opinion, more creative and interesting than the ones in One Skein Wonders. Last spring's release of Leigh Radford's book, One Skein, may also explain why this collection of patterns seems less than cutting-edge to me.

The book is similar in production quality to the first Stitch-N-Bitch book: paperback with two-color text with sepia-ish photographs and a series of color plates in the middle showing the projects. The lack of color photography throughout the entire book is clearly the trade-off for the quantity of patterns; it would be prohibitively expensive to photograph all 101 projects individually. And since most of the projects are simple and straightforward, detailed photography isn't as essential as with more complex or unusual patterns.

As with so many pattern books, you are advised to look before you buy. If you are an experienced knitter who isn't afraid of creating your own basic patterns for hats and scarves, this book may not seem worth the money (MSRP $18.95; currently $12.89 at Amazon.com)for you. Likewise, if you prefer more challenging projects, or have been knitting a long time and have had your fill of roll-brim caps and scarves knit on big needles (and how many wine bottle bags can one person knit?), this book may seem less desirable. On the other hand, there are plenty of knitters who like to follow directions, who find trying to parse out their own patterns stressful or frustrating, and I suspect these knitters will be much more receptive to One-Skein Wonders. If you're looking for ideas to burn through some stash, or if you make a lot of gifts for charities or bazaars, you're more likely to find this book useful. And if you don't have a LYS nearby to tempt you with quickie patterns, a lot of these items will look fresher than they do to these jaded eyes.

Wonder-ful? Maybe not. But in enthusiasm and sheer quantity, One-Skein Wonders will be more than adequate for many (though not all) knitters.

Thanks for the review. I think your opinion is as usual, honest, unbiased & dead-on! I've only been knitting a year, but I'm thinking ahead to cable work and intarsia. So this time, I resisted. I'd rather save & collect EZ, Walker, etc.

Not sure if you realize this, but your book reviews are the most helpful that I've found. You have nothing to loose or gain by it, which is what makes it so valuable. Thank you!

Have you ever thought of compiling the links in the sidebar so that it would be easy to see all the reviews you've done so far?

Great idea, Faith. I'm long overdue to tinker with the sidebar -- got some links to add.

Have you just not seen a pattern for an ice-scraper mitt? Or have you never seen an ice-scraper mitt? If the latter, it probably says something about the severity of your winters. They appear here, often made of sheepskin, every winter. I have never owned one but often thought they were a fabulous idea. That probably says something about the severity of the winter here :-)

Well, I've seen a few mittenish things with scrapers attached, but never even thought to knit one.

Our winters aren't very severe -- usually 1 big snowfall and 1 small one, and temperatures rarely below 20 degrees.

Carol,
If you're going to add links(great idea to have them for book reviews), could you also add them for your "lessons" -- like what you did on sleeves and yarns, etc so I could find them easily when I want to reread your pearls of wisdom.

Thanks for your blog, my friend! (I didn't get to say Happy Blogivesary earlier.) I love it all.

Wow, thanks for the review...you included all the details I always want to know :)

Thanks for the review. I looked at the book and also noted that some of the "one" skeins were 500 metres. Yikes! : )

Thanks for the review. I've been wondering about that book for a while and appreciate your summary.

I contributed two of the patterns in this book, the Aran Tam and the "Golden Fantasy" beaded bag. Frankly, I thought these were meaty enough to interest an intermediate knitter. Both samples were fun to do. True, the tam is a traditional design with updated instructions, and the bag is easy as far as beaded knitting goes.

I agree that many of the patterns in the book are pretty simple and I, too, have seen a gazillion repetitions of the simple ribbed watch cap and the rectangular shoulder bag. But there were a couple of interesting new slants on things. The Twisted Spiral Neckscarf (shaped with short rows) has given me some ideas.

I actually found this book more pleasant to browse through than that other one skein book.

While you're at it, you can even enter to win FREE yarn! YEAH!