Some of you who've been reading a while know that slowly, over the years, I've been putting together a genealogy for my kids. I've always been fascinated with stories about my family's background, and as part of collecting those stories, I've been trying to collect old family photos, too. Just for fun, I've been scanning some of them and posting them on Facebook so that my cousins can see them.

Last week I was scanning this photo -- my mom's wedding portrait. 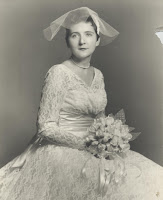 As I took the photo out of its frame, I was surprised to find another photograph hiding behind it. I should explain that growing up, we did not have a lot of pre-1972 photographs in our house. (In 1972, Hurricane Agnes caused a massive flood in my hometown. My parents' house was covered by 30+ feet of muddy flood water and nearly everything in the house was either ruined or washed away -- including mementos, photographs and other keepsakes.) This particular photograph came from my grandmother's house -- she lived in a different part of town, on higher ground, and her house was never flooded. After my grandmother moved into a nursing home years ago, my mom and aunt divided up the photographs that my grandmother had. My mom gave it to me.

Anyway, as I said, I was carefully removing the photo from its frame when I realized that there was a second photograph underneath. When I took a good look at the photo that was hiding under the wedding portrait, I totally cracked up. It's this: 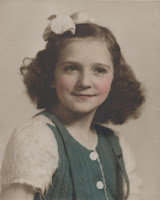 That is my mom as a girl. As best as we can tell, she's about eleven or twelve or so in the photo. She remembers her mom putting the bow in her hair ("My mother always loved putting bows in our hair") and she thinks the sleeves were a pink angora-type sweater. I had never seen this photo before and until I showed it to my mom, wasn't even sure whether it was my mom or my aunt in it. I guess my grandmother must have needed a photo frame when she got a copy of my mom's wedding photo, and just popped it in this one over the one that was there.

Where it remained for over fifty years (!) until I found it last week.
Posted by Carol at 7:46 AM

How lovely is that wedding gown!? A friend just found her parents wedding photographs as well, and the pictures from those days are SO stunning.

What a wonderful treasure you discovered. Thanks for sharing Carol. Love those older, sepia toned pics where they tinted your cheeks - like this one! Would have loved to seen the whole sweater too. Terry

What a wonderful "two-fer". Glad you found it, and that you have your Mom to ask about it.

Me - I'm playing detective with albums that aren't labeled with names, just sentiments such as "isn't he CUTE?" By now, I'm the matriarch of the family, and only my "baby" brother remains.

Kitten With a Whiplash said...

What a lovely surprise!

Makes you want to hunt down other older framed photos and take a peek, doesn't it? Thanks for sharing this.

thanks for sharing the beautiful photos of your mom!

that's a true rare gem! wonderful! and inspires me to do the same!

That's a pink angora bolero. I'm younger than your mother, but I had three which my mother knitted, pink, blue and red. She choked on every one of them because of the fluff, but she was a stubborn sort of a person and kept on knitting. E-v-e-r-y-b-o-d-y under the age of 12 had an angora bolero.

What a pretty lady! Thanks for posting these.
- Beth in Toronto