I have to confess to an increasing fascination with modern fabrics and quilting. I blame this entirely on my pal Liza, who is an extremely talented quilter/designer/author (not to mention quilting collaborator with the great Kaffe Fassett). Liza has a quilt pattern in the new Quilt Magazine and I had the good luck to see it in person last weekend. 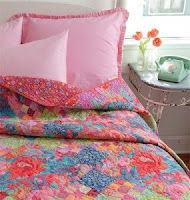 The colors are so vibrant that the photos in the magazine can't really do it justice. I'm asking Mr. Go-Knit-In-Your-Hat for a kit for this quilt for my birthday present....(available on Liza's website, link above -- got that, Tom?). 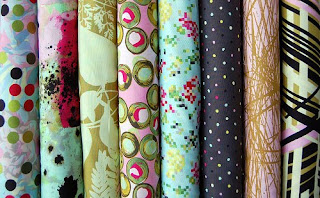 Habitat (I think it's the Pastoral colorway)

I also saw that designer (and Philly resident) Jay McCarroll has a new line of fabric out called Habitat. I really liked Jay's previous fabrics, so I was very pleased to see that Spool in Philly is carrying it. In fact, Spool is having a Habitat Party with Jay tomorrow, Saturday, Feb. 12th, from 2 to 5 p.m. Details here. (Unfortunately Saturdays can be tough for me due to kid activities, so I won't be able to make it but I'm hoping to get my hands on some of the fabric soon.) One of my "six degrees of separation" claims to fame is that my dear aunt Carol (for whom I was named) used to be Jay's mailman. (Well, sort of. I should say "mail-woman" because my aunt is not my uncle, and she was actually the postmistress of the local post office in the rural part of Pennsylvania where Jay grew up as opposed to his letter carrier.) So if you're in the neighborhood, stop by the party.
Posted by Carol at 10:31 AM

Any recommendations for books that might introduce a sewing newbie to quilting? Classes are not really an option in my area.

The Practical Guide to Patchwork by E. Hartman; Dare to be Square by B. Radley; Denyse Schmidt's book are all good ones with a modern aesthetic.

Completely agree with those recommendations plus going through the Oh Frannson blog archives/tutorials.

Liza's quilt is gorgeous!! Love the simplicity and letting those fabrics shine. I could see that in a bright spring colorway of yellows and green to banish these winter blues. Hope you get your kit and show us your quilt!!

Thanks for the shout out, Carol! I'm sorry we won't be seeing you today- but I'm glad to know you got your fabric fix yesterday!