We were a little reluctant to arise on Saturday morning, having had so much fun the night before, but we are also excited to get out on the show floor and see what goodies would be coming to the industry this fall. So we dragged ourselves out of bed, showered and headed out for a nice breakfast with Veve 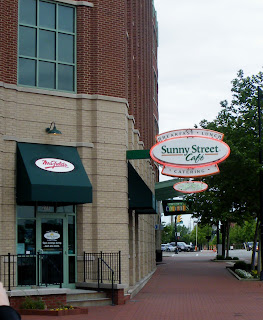 at the Sunny Street Cafe -- which had the multiple advantages of being out of the hotel/convention center complex, and therefore cheaper, had decent food, and had the most charming manager.

Of course, even the charming manager could do nothing about Sad TNNA Breakfast: 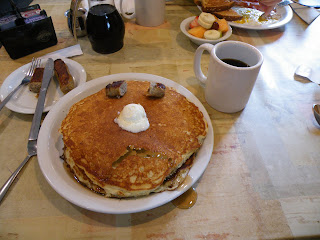 Sad TNNA Breakfast was sad because so many of his good friends weren't there this year....(you know who you are). 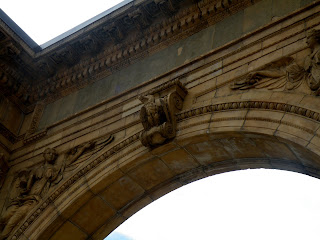 while looking at the buildings around us, 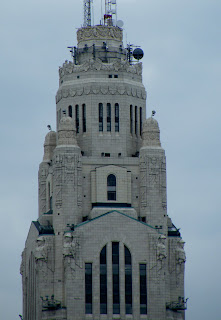 before entering the Convention Center for a long but exciting day of exploring.

It's hard to get the big picture view of the show while you're there. You walk up and down aisle and after aisle, and Veronik yells at you if you go out of order so you have to strictly keep to the row you're in or she'll go all French on your derriere, and there is so much to see and so many people you know that it's a jumble of impressions. I'll do some separate posts on the some of the new products coming from our favorite companies, but generally speaking, I had these observations to make:
Contrary to what some people would have you believe, I did get a little bit of stalking and gawking in. For example, I kept a close eye on Melissa Morgan-Oakes 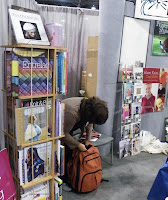 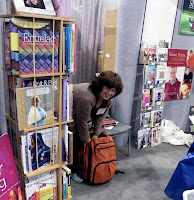 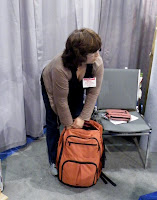 and managed to "kinnear" Martin Storey while he was at the Rowan booth. 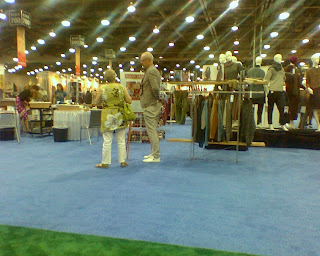 Perhaps most scandalous, however, was my witnessing a blatant attempt of larceny at a leading knitting magazine's booth. 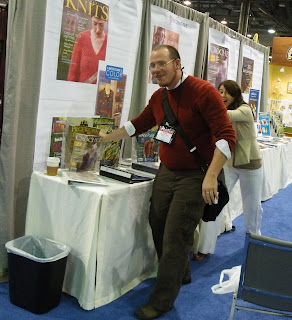 Watch this shameless attempt to shoplift a copy of a brand-new knitting magazine.... 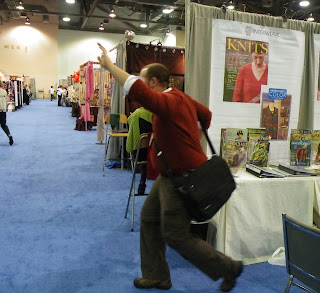 as this thieving Creative Director makes a dash. 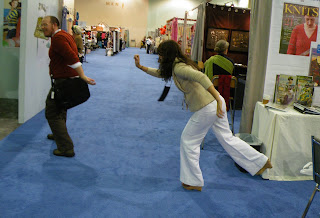 (I put my money on Annie Bakken, though.) 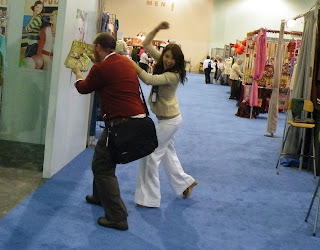 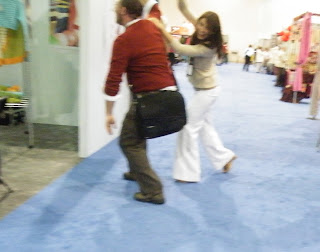 Yup, looks like Annie gave him a good ass-whuppin'. I don't think Mr. Delvecchio will try that again any time soon.

naughty naughty michael! just cause you are creative director...

I would SO like to see veve go bonkers on your butt! bwhahahaha!

you're too funny Carol! love reading your posts cuz it's the real deal:) knittinnow/Terry

That explains the sirens.

I feel much more stalked now. Thank you. Not being stalked is so sad.