6 things I learned this week

1. Honey-Nut Cheerios violate the anti-nut policy of my kids' preschool because they have chopped almonds in them.
2. Rupert Holmes, author of the "Pina Colada Song," also wrote the awful cannibalism song "Timothy."
3. Only 35% of coffee drinkers drink their coffee black.
4. Contrary to my expectation, I can get even more sick of and repulsed by Tom Cruise.*
5. Kenny Rogers, 67, has two-year-old twins.
6. Rev. Sun Yung Moon is the principal in a company that supplies the majority of sushi to American restaurants, thereby ensuring that the California roll you eat indirectly supports his controversial church.


* I was highly amused to hear, however, that "Suri," the name of TomKat's new daughter, also means "scram" in Hebrew, "pointy nose" in some Indian dialects, and "pickpocket" in Japanese.

It may seem strange to be anticipating autumn when spring is barely upon us, but yarn reps are now traveling across their territories, taking orders for fall yarns. Fall ordering is bittersweet for us yarn diehards; for every exciting new yarn that is going to be released (how about a wool/soy silk blend from Rowan?) there are good yarns being discontinued. Rowan, for example, is discontinuing the entire Yorkshire line, all weights, and this makes me sad; I guess they are going to push the Scottish Tweed in its place. I haven't seen much of the Scottish Tweed in real life, so I can't really compare the two. Chunky Print is also being discontinued; I usually use thick yarns like Chunky Print only for quick accessories like hats and scarves, so I probably won't miss it much, but it did have some fun color combinations. Noro is discontinuing Big Kureyon, but since they have so many similar yarns at the chunkier end, again, this one probably won't be cause for too much gloom. I did like it, though, and have a great cap I made with it that I wear in the winter.

I want to thank the people who've written to me to give me feedback about Black Bunny yarns. This morning I skeined up some lovely, lovely hanks. These are sock yarns: 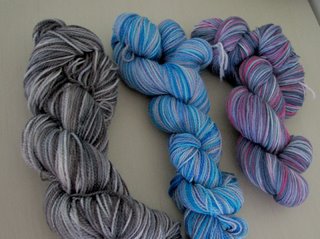 The grey one on the left is already up on Etsy (great for men); the purple-blue one on the right is a special order for Dee, and if it isn't exactly what she was looking for, I'll put it up on Etsy; the blue one in the middle kills me to sell, since I love that combination of colors, 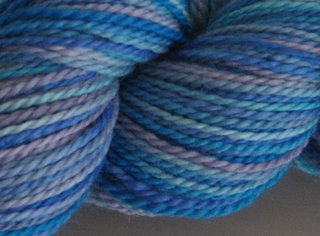 but I'm sure (sniff) it'll find itself a good home once I list it later today. Geez, it's a good thing I don't breed kittens or fluffy bunnies or anything, since I already get weepy sending my creations out into the world.

This is some worsted weight I'm playing around with which may appeal to you green fans. 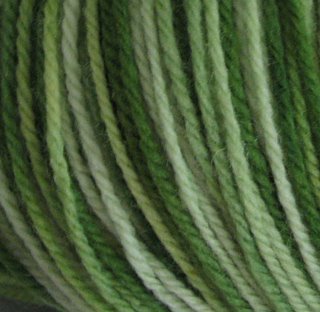 It's not superwash, and probably could be felted (although that pains me a little to think about for some silly reason; I mean, why should it matter whether it gets knit or knit/felted?), and I'm going to dye a few different colorways of this to see what people think of it. There's over 425 yds. in this hank, so you could easily get a hat & mittens, or a little sweater, or a scarf out of it, or whatever else you can think of.

I'm also working on a web site for Black Bunny. It's still very early, and my knowledge of web-building is minimal, as is my budget, so I've used a web hosting service that provides preformatted pages. I'll let you know when it's up and running; it'll take at least a few weeks. I'm going to continue selling through Etsy for the foreseeable future even after the site is up, but I'm hoping to have information about the kinds of yarns and fibers I use, photographs of projects and swatches that people have made with them (so if you've purchased something and have any photos you'd be willing to have me put on the website, feel free to send them! even photos of swatches or yarn on a bobbin would be terrific), maybe even some really simple free patterns after things get more established.

I received a package last week from my dear friend Molly, who sometimes comments here (but not nearly enough). In it was: 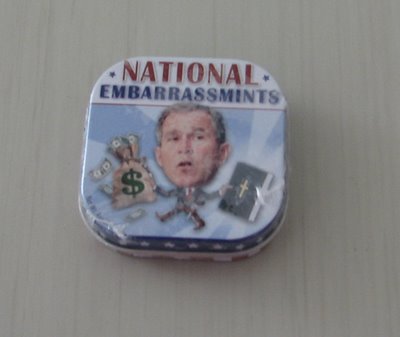 a pack of "National Embarrassmints" (heh) and 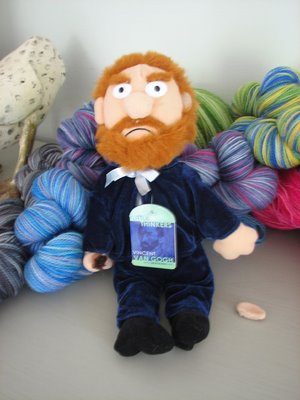 a Vincent Van Gogh doll. The best part about the doll, you see, is the detachable ear. God, I have great friends! Thanks, Mol!

The preschool silent auction is, ahem, Saturday, and so far I've got two foofy scarves and a doggie jacket. I also have an adult cap on the needles, which I should be able to finish today or tomorrow. Photos once they're all ready to go. I've never donated to a fundraiser like this, but I figure I should tag them saying what they are and what kind of fiber and what size.

Coming this week: the rest of the Yarn Substitution Tome, and some book reviews...
Posted by Carol at 5:01 PM

OK, you've got me hooked. I'm finally considering doing some dyeing, after much consideration. I'm thinking that my warping board for the loom is perfect for making long lengths so that I can handpaint them. Many people do paint their warps but I'm thinking more in the line of some spun and plyed yarn. I'm not selling this, though. It's for mememememe.

Just another summer project. Sigh. I need to find a rich man so I can do this all the time.

I think the most disturbing thing about Kenny Rogers is his creepy new plastic surgery!
What happened to cowboys growing old gracefully? I mean...he looks like his cheeks are quickly eating the rest of his face! I almost feel dirty for playing his Gambler slot machine.

your yarn color choices are amazing; I like the greens, but would need about 1200 yards for a man's sweater (spouse is a big guy). dang - I will bide my time and wait for that amount to appear in your shop.

Not me like the sushi.
Now I know why.

Anne Marie in Philly, my sweet, do you want 1200 yds of worsted wt? Or finer? Those bright grassy greens or more forest-y tones? Just tell me your wish, and it shall be done.

As for the silent auction, you might want to consider tagging with a minimum price. In my experience, handknit items tend to go for less than even the cost of the yarn, and I've tried critter scarves, bags with wooden handles, among others.

OK, I wrote a whole big comment and it disappeared. Freakin puters.

Don't even bother listing the blue middle sock yarn- just send it on. (ooh, or bring it to MD) You gotta stop this, I will have no MD budget left...

So they have a daughter named after an alpaca, hmmmm.

As long as I'm damaging my checking account today, hows about some pale pink laceweight? Lots of yardage, if you please.

I am very much enjoying watching your bunny grow, ma'am.

Hey Catherine, I will gladly ship to Australia or anywhere else in the world -- as long as you're willing to pay the postage or shipping. I'll look around and see; I suspect the post office is cheapest but I'll compare UPS and FedEx as well so I can give you an idea of cost. That goes for anywhere in the world -- I've already shipped to Canada and Britain.

Mindy, sweets, it sold almost instantly. I will dye some more, though, and I'll get cracking on the laceweight.

Catherine, US post office is between 5 and 10 dollars (US), depending on weight. If there's anything in particular you're interested in, email me (click on "Contact" on the right). Or if you see something, purchase it but let me reinvoice you with the correct amt of postage. If I overcharge you, I'll refund the rest when I return from the post office.

OMG, you would really make yarn just for me?

I showed spouse the pix; he liked the grass green shades (heh heh heh, I said grass; smoke 'em if ya got 'em).

contact me off-blog at girl9654@yahoo.com for da money, honey. and thank you for taking the time to create fiber for my artistic endeavours.

Don't forget to put the washing instructions on your tag! My sis bought a wonderful baby sweater at such an auction, washed it and now Barbie is looking far too good. She just didn't know (and of course, would not ask someone who does...like say her knitting sister...).

That blue--oh how my heart aches. I am going to have to stop working and stay at the ready.....

Hey Carol, I have a picture of some of your top, spun up on my blog. It's newbie spinner work, and it's the first time I plyed anything so you may not want to use it as an example. I adore how squishy it is.