Good start, with two books -- starkly different from each other -- but both interesting reading.

1. The Lost: A Search for Six of Six Million

by Daniel Mendelsohn. Gripping story of a New York writer's search to discover what happened to his great-uncle and his family, who perished at the hands of the Nazis in wartime Poland. This book moved and fascinated me. I'm an amateur genealogist, so the allure of tracking down the long-lost family members -- including the details that make relatives more real ("she had great legs," "she was a snob," "he loved his wife so much")-- was irresistible to me, but when placed against the backdrop of the Holocaust, the book takes on tremendous depth and emotion. This one's going to stay with me for a while.

2.Leave Me Alone, I'm Reading: Finding and Losing Myself in Books

by Maureen Corrigan. Written by Fresh Aire's book reviewer in a sort of memoir meets lit crit, this one was a pretty quick read. NPR has been introducing me to some interesting reads: as a matter of fact, I heard the author of The Lost on it, and this one, too. (I started to wonder what kind of spell my local public radio station was casting on me when Marty Moss-Coane's interview of a guy who wrote a book on the glory of pigeons -- and no, it's not Sesame Street's Bert -- started to sound really interesting. But so far, I've passed on the pigeon book.) Corrigan's descriptions of how a love of reading helped her and hurt her hit home with me (oh, the agony of realizing that real teens were nothing like the ones in my Whitman novels!) . I also enjoyed her survey of books she particularly enjoyed, complete with analytical spin on them. (It's the first time I ever heard anyone else talk about the Beany Malone series

of books, which I read when I was a kid, as part of her Catholic schoolgirl lit discussion.)

will be this coming Monday, February 5th, in the morning. I've got some small laceweight hanks and some superwash merino sock yarn, including the following: 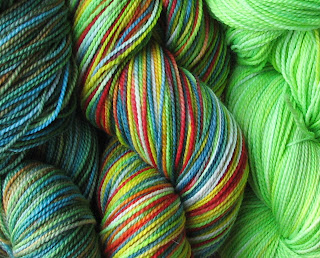 Love the colors of the yarns! Pretty combinations.

I loved Corrigan's book. I hadn't thought about some of those books like Beany Malone and Karen in a million years. When I finished Leave Me Alone I'm Reading I wanted to send a copy to all of my bookish Catholic schoolgirl friends.m

I missed your poetry post till today.
That is the one and only poem I memorized in school that I remember every word of. (I must have done a couple of hundred) I recite it to every child I know. It brought back great memories, and it was fun to see that it is in someone else's brain too.
Barb B.

WOW, that hank on the left is STUNNING. what is that purty colorway?? will have to check it out tomorrow, i guess... also, not sure if it's you thing but if you like "freakonomics" and/or any of malcolm gladwell's books, i just started some new subway reading - a book called "the undercover economist," by tim hartford - and it is already awesome. a very cool way to look at how economics works in the everday! ~gabriella

The Lost sounds fascinating. I finished tracking my half of the family years ago but was able to do my husbands before we left England. Europeans write amazing things in church records!