Can you believe I forgot my own Blogiversary? November 6th was the second anniversary of Go Knit In Your Hat. Once again, thanks to all my loyal readers. You mean more to me than you realize. (insert fahrklemt noises)

Home Despot
We are making the transition to Big Kid Beds and Big Kid Rooms. You see, the twins had to leave their cribs a few years ago due to a certain Little Miss climbing out and hanging precipitously on the rails. We tried low "toddler beds," which were a great transition, but the twins are growing so much that they no longer are comfortable. Thus we needed to get them real Big Kid beds.
On Saturday, furniture for the Big Kid Rooms was deposited in our house. This means that Tom and I had to clear a path for the actual moving of the furniture (way more difficult than it sounds in our house). With the Germ-a-pa-looza we've been having (did I mention that Elvis' strep CAME BACK?!), of course the rooms themselves are a mess and not painted.
This weekend, I continued the wallpaper stripping in N's room (didn't I blog about starting that like, five months ago?! so sad I'm still doing it) and Tom did patching and sanding in G's room. I was told by my husband that I could not help paint because I am "not careful enough." I will let you be the judge; here are two unretouched photographs of the wallpaper stripping. Guess which part of the wall I worked on, and which one Tom worked on (hint: mine is the one with the paint swatches on it; his is the one with the huge gouges out of the drywall): 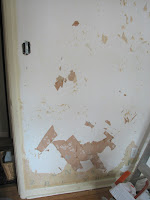 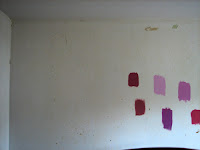 If you happen to be looking for some lovely roving to spin, you will find some at Mindy's Etsy site. She very kindly gave me some to play with when I saw her at Stitches. It's the border leiciester/mohair blend that I sometimes dye except Mindy does completely different fabulous things with it and blends it together in these hazy soft colors that are lovely. Here is what I am spinning: 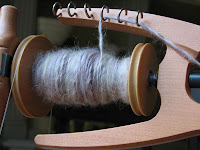 It's called Genevieve's Mountain Haze, and it's got pretty pale purple running through it. The coolest part is that Mindy takes amazing care of her goats, and the "Genevieve" is the name of her goat that the fiber came from....

She also gave me some of her handspun yarn to play with and I am trying to get her to list more on Etsy because it's so lovely:

If she knows what's good for her, she'll list some on her Etsy site soon....
BBF Club Update

Thanks for your emails about the BBF Sock and Fiber Clubs! I had an excellent response for my trial run. I was able to accommodate everyone who wanted to be in the Fiber Club and had to draw names for the Sock Club. (I let G. draw the names; she felt quite honored.) As soon as I'm done posting this, I'm going to email everyone who submitted their name to tell them if their names were drawn or not.
Next Black Bunny Update

Look for an update Wednesday morning, mostly laceweights with a few odds and ends, and hopefully some roving.
Blogiversary Present
Showing up on Amazon.com

Mwah! Love your spinning on Genevieve's color- maybe if I tell her she'll forgive me for spinning Stuff's first...

You're on Amazon- yay!

man, what a craaaaazy household!

happy thanksgiving, happy redecorating, get well soon (all of you), happy blogiversary.

oh yeah, and I put the book on my wish list. can I have an autograph yet? no? selfish!

I'm not allowed to help with painting at our house either, also because I'm not careful enough. Except in my case it's true ...

Very cool to know someone with a book listed on Amazon!

Happy blogiversary! I am looking forward to Knit So Fine, it's in my Amazon shopping cart!

You poor girl! Those kids rooms look like a lot of work. Husbands micromanaging is dangerous stuff... usually for them =) Beautiful fiber you've got there!

Hoo Boy! Good for you and the new book. I look forward to owning it. You have 3 kids, are redecorating (what looks like an older house, you brave soul) and have a published books in the wings. You got it goin' on!

Isn't it fantastic when someone who deserves it does so well in life?

Folks always ask how I get it all done, and then I think of you doing all the same things and raising kids. Makes me want to go take a nap.

Only if you are knitting with lavandar colored yarn...

Happy anniversary, sweetie. It seems like you've been writing this for eons but I guess it is just two years.

As Joe said, I don't know how you do it all, the kids, BBF, the blog, and dealing with your Lyme crap. But you do have a wonderful husband. And you are my dear sissy. Love you much.

Happy Blogiversary! And Amazon pic. I have ordered your book from my LYS, I figure it should be in just in time for my birthday.

Also, I just noticed over on BBF that 2 more sales will put you at 1000. Another congrats!

Ahhh, Big Kid Beds. We didn't do the toddler beds, just put the BKB on the floor with no legs. (Mine got out of the crib by busting out the bars) They'll be in college before you know it.

Jesus, Barb, did they really bust out the crib bars? Did you have some kind of uber toddler or something?

Happy Blogiversary! May they continue for many years. I'd consider myself well out of the painting biz if I were you. I "am" careful enough, having learned to cut in in elementary school. The thrill, however, is gone.

Actually, Tabitha, only the younger one bust out the bars, the older one just shinnied up and over. I don't know how he did it, but he bust out one, I fixed the hole, and he bust out another one, this one all jaggedy so he could have impaled himself crawling out. BKB at 13 months. I am thinking now there was something wrong with the wood in the crib bars. He seems pretty normal now that he's 24 yrs. old.

If he claims you are not careful enough to paint, doesn't that mean he is volunteering to do ALL the painting? Keep your mouth shut and let him!