Yesterday, Elvis learned to knit. He has been asking me for a while, and we've tried it a few times before that never seemed to take, but yesterday afternoon, worn down by all the sick people in my house (Elvis has strep, Tom has ... something icky and nasty but we're hoping it's not N.'s pneumonia), I pulled out a ball of chunky crap yarn and some child-friendly needles. Ably assisted by Kids Knitting, he was soon fascinated and produced this:

His first garter-stitch swatch. That's one for the scrapbook...

Just a few hours later, he had graduated to this: 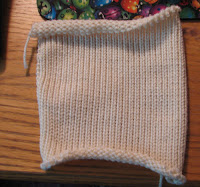 Hah! Only kidding. His later squares still look like the first one, but he's enjoying it and getting better. And what nicer way could there be to spend a Sunday afternoon?
Posted by Carol at 11:06 AM

Oh how sweet! I'm waiting for the day when mine ask to learn (and then I have palpatations about sharing my stash...)

That's excellent...do you think he'll be ready to go to the Men's Knitting Retreat in May 2008?

Remembering how my grandmother tried to teach me to knit and crochet when I was quite young. It never took, but it never left me either.

Only if I get to come, too, babe. (Someone's got to drive him, no?) If you want, I'll get some cross-dressing trips from Norah/Ned. Maybe Lisa will lend me a strap-on.

welcome to the dark side, elvis!

carol, elvis can become a member of the montco sit-n-knit group if he so desires! s-w-e-e-t!

Go, Elvis. Chicks dig male knitters (it's like the men in kilts thing--go figure), you'll earn Mom points and when you get stuck in the anxious boredom situations, it helps keep you from smacking people.

Goodness, I saw that 2nd swatch and almost had a heart attack. LOL
Hooray Elvis!! MyFavoriteBoyKid knits, too.

Hope everyone starts to feel better at your house.

Elvis is just the right age to learn, too. I think he did fantastically well! God knows when I was his age, my knitting was a mess and Mammy always had to fix the stitches for me.

Joe's comment about learning to knit at a young age is true. I learned at 8, fiddled around with it, knit some Barbie crap at 10 and then didn't take up the needles again until 18. And it all came back to me. Be prepared for a lack of interest on Elvis's part in a few weeks. Right now it's a novelty. But then, 10 years from now, he'll be knitting his ma lace shawls.