It's official: the spring issue of Knotions just went live. In it, you will find two sock patterns of mine, both well-suited for handdyed yarns. The first is the Sunrise Chevron socks, which were knit using a BBF sock flat: 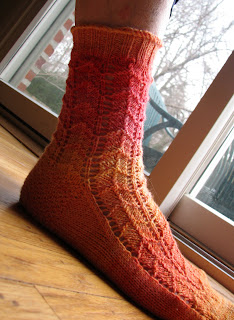 There are still some sock flats left at the BBF shop and I'm dyeing some more (hopefully tomorrow). I think the pattern would also work well in self-striping yarn like the Kaffe Fassett stuff from Regia, or the Trekking XXL colorways that meld into each other. (Which is one of my favorite things about teh internet: being able to see other people's versions of my patterns using different yarns. So don't forget to put those projects up on Ravelry!)

The second pattern is a quick "fair isle" project, using two muted multicolor sock yarns instead of solids. I hadn't done any stranded knitting in a little while, and these socks reminded me how much fun it is: 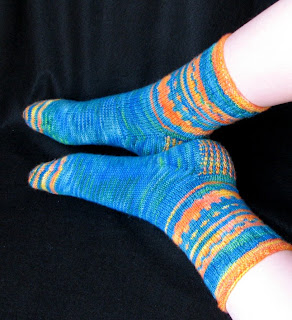 I've also done a review of the new Nashua Handknits magazine, which premiered this fall. And Knotions also has some very pretty patterns for a lovely lace stole, two more sock patterns, a textured vest, a stranded-style cardi and a baby blanket and a cool belted cardigan...so there are plenty of goodies for you to explore over at Knotions today.
Posted by Carol at 9:32 AM

Love the new socks! I'm adding the colorwork one to my queue now.