I am thrilled to be a part of the STC blog tour for Kaffe Fassett's Simple Shapes Spectacular Quilts: 23 Original Quilt Designs

(STC 2010; MSRP $35.00, but available via the link for $23.10 at the time of this writing), by Kaffe Fassett with Liza Prior Lucy. Many, I hope most, of you knitters are familiar with Kaffe Fassett's non-quilting fiber work. He's a frequent contributor to Rowan Magazine; has written beautiful books like Glorious Knitting

, designs needlepoint, paints, and, of course, is involved in creating beautiful fabrics for Rowan with which he creates unbelievable quilting designs.

Well, Liza Prior Lucy is one of the most accomplished people you'll ever want to meet in the fiber world. When I first met her, I had no idea who she was or all of the things she'd done: needlepoint design, a longtime presence in the knitting world, and now the goddess of patchwork.

So how did Liza Lucy end up as collaborator and right-hand gal to the esteemed Kaffe Fassett? 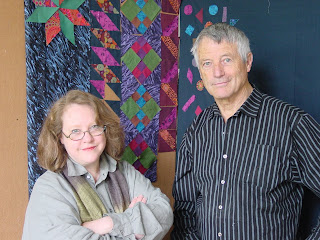 Go back awhile in time. Liza Lucy was sales representative for several big-name yarn companies; her territory was Pennsylvania, New York and New Jersey. One day, Liza was in a shop that was selling a Kaffe Fassett knitting book. "I'd been knitting for years and I'd never seen anything like it," she remembers. "I immediately bought six copies of it. One for me, one for my mother, one for my cousin, and so on."

The next day, Liza got a call from someone asking her to add a new line of knitting yarns to her portfolio. Liza grumbled. "I kept saying no, I already represented all the best knitting lines. I said my suitcase was already too heavy. I kept saying no." Then she heard that the yarn company was working with a designer with an unpronounceable name, "Coffee Faucet," or something like that. Liza realized who it was, and immediately added that yarn line to her portfolio. Yes, dear readers, that little new yarn line was Rowan.

After Liza added Rowan to the companies she was representing (and rued the fact that if she'd waited one more day "I could have bought those six books at wholesale!"), part of her job became working with Kaffe Fassett to sell his knitting book. "Part of my job," Liza remembers, "was to take Kaffe around to the shops in my territory to booksignings. We went all over New York, New Jersey and Pennsylvania. And no one showed up." At the time, book signings weren't regularly held for crafting titles, and shops that couldn't harness the power of the internet-- remember you young 'uns, there was a time in the crafting world when there was No Internet -- didn't have the tools they now have to get the word out and create buzz surrounding author/designer visits. "We went from shop to shop, and no one came. So we got to spend hours together yakking and getting to know each other."

Kaffe and Liza hit it off. They both had grown up in small towns and loved them, even as they knew they had to leave their small hometowns to do the work they wanted to do. They liked the same music and the same movies, and the similarities laid the ground for a strong friendship.

Several years later, Liza was pregnant and starting to do patchwork quilting. She sent Kaffe a postcard asking him if he wanted to do a quilting book with her. Kaffe wrote back, saying "Nice hearing from you, keep in touch." As Liza recalls, "He never came right out and said no. He may have meant 'no, thank you' but I never saw the words 'no, thank you' so I figured he hadn't said no." She began working on quilt designs, looking at Kaffe's other work and adapting some of his knitting motifs into quilted ones. He would write back with critiques and suggestions -- "that one needs a bit more yellow" -- and the foundation for their working relationship was born.

When Liza received a phone call out of the blue from a woman looking to sell a Kaffe Fassett painting that she had purchased in the 70s, Liza, who was considering buying it, first asked what the subject was. "She said it was a patchwork quilt. I said yes. Later, Kaffe saw the painting, and after that, I think we both knew it was meant to be." The world of fabric and quilting was changed forever when Ken Bridgewater and Stephen Sheard agreed to start Rowan Patchwork & Quilting Company out of friendship and support for Kaffe and Liza. Kaffe not only had a place to showcase his designs, but a supportive company to develop fabrics that he would design. 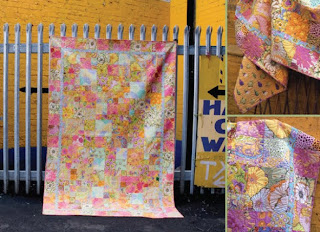 Four books later, umpteen fabric patterns later, the working relationship between Kaffe and Liza has endured. And the latest fruits of their collaboration is a spectacular addition to the fiber arts world.

Simple Shapes, Spectacular Quilts contains exactly what the name promises: it takes a handful of simple geometric shapes -- the kind any first-grader would know -- and shows how to turn them into spectacular quilts. The book, just under 200 pages long, is divided into six sections: Squares, Rectangles, Triangles, Diamonds, Quarter Circles and Circles. Each section begins with a montage of photographs featuring the shape in art or nature, followed by a few pages in which Fassett discusses how the shape inspires his work. Next, the quilts themselves are featured in gorgeous photographs and in many cases, alternate colorways. The patterns and instructions for the quilts follow, with a full-page photo of the quilt laid flat, and lots of color diagrams showing how the quilt is constructed.

I will freely confess that exposure to Kaffe and Liza's work has turned me into a quilter -- or at least someone who dabbles in quilting. The striking patterns of the fabrics, the combinations of colors, the way that shapes play off each other, all of these aspects of Kaffe and Liza's quilting fascinate me and make me want to play with fabric myself. But since my audience of readers is primarily knitting, what does this have to do with you?

Everything, really. The beauty of Simple Shapes is that you don't have to be a quilter to take away so much from the book. Simply as a coffee table book, full of gorgeous photography (done by Debbie Patterson), the book is worth the twenty bucks or so for its beauty alone. But as a knitter, we don't have to stick with knitting patterns for inspiration. Simple Shapes is full of color and interesting color mixes: fodder for combining color in your knitting projects. Simple Shapes looks at different shapes and combines them to form spectacular quilts: as a knitter, you can use shapes, either in knitting modularly or as motifs in your work. Simple Shapes shows individual geometric figures that anyone can see in the world around them and applies them to quilting: you as a knitter can look around in your world and find shapes and color combinations and textural effects and incorporate them into your knitting. I'm a believer in the subconscious aspect of creating, and even if you don't set out on a field trip to look for, say, hexagons in your daily life, just the exposure to this way of thinking will, I think, meander around in your subconscious and come out in interesting ways in your knitting and/or crochet work.

So this knitter (and peripatetic quilter) highly recommends Simple Shapes, Spectacular Quilts for anyone and everyone on your fiber-lovers list. It's eye candy, and worth it for that reason alone, but it also has a lot to show us about color, design and the creative process.

For more Kaffe and Liza quilting fun, check out the STC quilt-along here. There's a free download of a pattern, and links to a Facebook group where you can quilt along with others.

P.S. to my regular readers: update at the Black Bunny Fibers on-line shop went live yesterday, with mini-skeins that would be just perfect for using to play with color and shape...
Posted by Carol at 6:02 AM

I was hoping the book wouldn't be published 'til I had the cash at hand, so, Mother's Day gift card in hand, I will run (or the broken ankle equivalent) right out and buy it tomorrow. I love doing (though not a lot of) quilting in simple shapes with closely related colors, so this is right up my stash!

Thanks for the heads up and wonderful story of Liza and Kaffee. I scored a signed copy of one volume of my soon-to-be-complete set of Kaffee's work right off the shelves at a local B&N.

This is one of the best book reviews I have ever read! and I have read a fair few in my***years as a crafter of multitudinous crafts. It is informative and inspiring - and even although I am not quilting [at the moment]it has inspired me to order the book NOW. I love Kaffe Fassett, and his colour ethos and would love to have his courage on colour. Thanks.

My Mom is a quilter and I'll bet she would love to have this book! Great review!!!