Two words that best describe yesterday's visit to Maryland Sheep & Wool: ungodly hot. The combination of ninety-plus degree weather, lots of sun, and lots of people and animals crowded into barns meant that it was an uncomfortable and sweaty day.

Fortunately, there were plenty of things to distract us from the weather. Our drive down was uneventful and very pleasant as we exchanged gossip and caught up with each other. Alas, faithful companion Jim was unable to attend, but Kathy was able to come, which was very fun (although it would have been even more fun if Jim came too!): 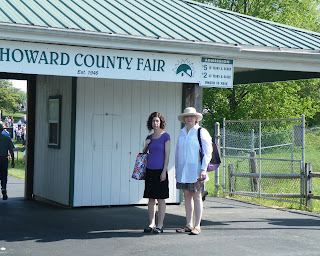 When I first started coming to Maryland, it was all about the fiber. But as my stash has grown and my tastes have developed, it's now become all about the people. We quickly found Anmiryam: 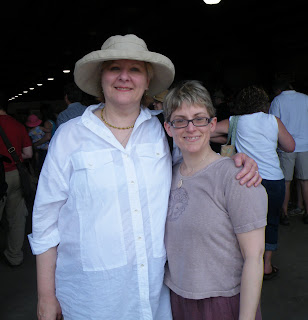 (I would like to point out that after years of dedicated trying, I believe I have finally managed to take a photo of Kathy in which she is looking directly at the camera, eyes open and smiling. It's a Christmas miracle (early)!)

We immediately went to Kid Hollow and found Mindy, and were delighted when Bridget joined us; 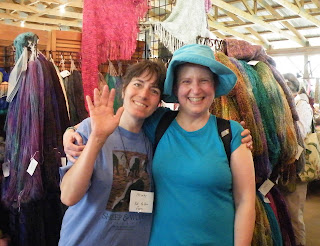 Along the way we ran into Lisa and Sherry: 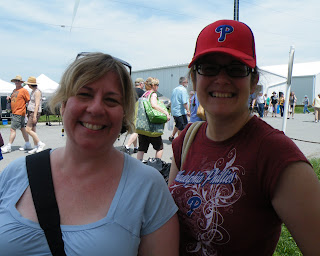 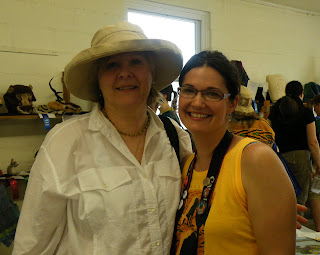 I left Poorluci's cell phone number in the car, and I was really sad that I'd miss her, when look who we saw on the way out of the parking lot: 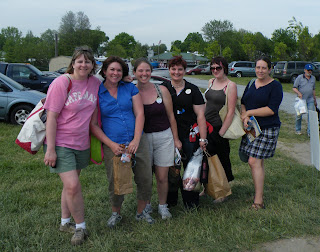 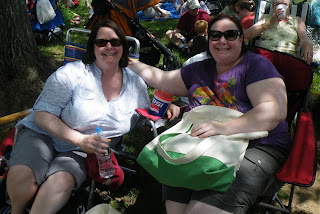 As usual, they set up base camp near where Brooks Farms used to be (they changed the layout of some of the booths) and while I was visiting, I got to see Robin, Wendy, and some other Philly folks. 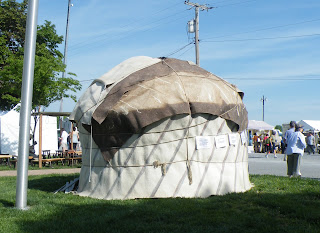 Were there cute animals there, you ask? Well, of course! Here's a bebeh alpaca: 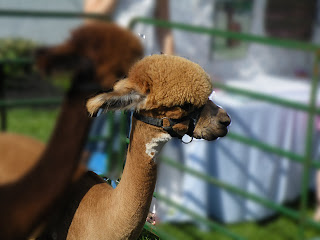 and here are some of the Kid Hollow goatehs 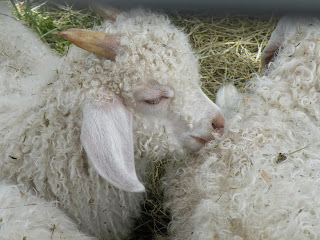 and I won't even discuss the teeny gray bunny that I almost brought home to be Charcoal's pal. (I was afraid to, though, because I didn't want Charcoal, Tom and the new bunny to get into some weird love triangle. It's already bad enough when your husband comes home from work and greets the pet rabbit before he greets you.)

There was the requisite sheep shearing, 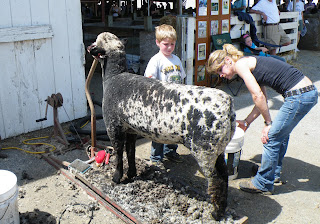 and clearly this sheep disapproved. 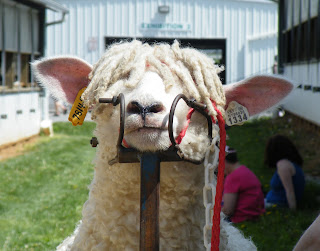 Did I buy anything, you ask? Not tons -- trying to save money for Elvis's braces, you know, but I did get some fleeces to be processed for BBF and I did splurge on some luscious Koigu roving: 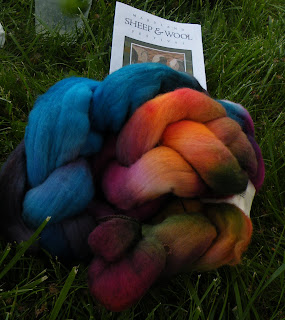 As we reflected on the day, we couldn't help but think of friends who weren't there to share in the fun, like Franklin, and the rest of the Wolvies, and Ve-ve, and of course, Jim, and a bunch of others, including L. and A., my Facebook pals. Someday I'll meet L. and A., and when I do, I imagine it'll look something like this: 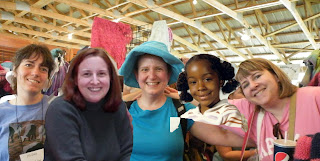 Tomorrow: a look at the prize-winners and a special treat for QueerJoe....
Posted by Carol at 10:37 AM

90 degrees?!?! Yikes. We could see a bit of snow tonight. Not sure I could have handled that much heat this early in the season. Still, it looks like it was a blast. Thanks for the photos.

Carol, I saw you just as we entered the parking lot, and I brought your book to get it signed, but I missed you the rest of the day! I think it took all my energy just to focus on the fiber!

You got some fantastic pictures! It was so wonderful seeing you again. I look forward to it every year. =) Finally meeting Kathy was such a treat too.

I greet the cats before the spouse...nothing wrong wid dat!

Argghhh. it was a great day, despite the heat. The picture of Kathy and me needs to be shredded -- I'm so chubbeh, how did that happen? Oh yeah, foods and whines, that'll do it to ya, grr...

Ms Amputeehee: catch a flight to Philly and I'll take care of the rest.
x

Maybe next year Veve and I can drive down.........
When are you coming up nhere, Miss BBF?