We interrupt this TNNA recap

for a quick discussion of last night's Stitch and Pitch game. First of all, let me say that I did not grow up in Philadelphia, but I love my adopted city as much (more?) as if I had. From the first summer that I lived here, working for a government agency after my first year of law school, I felt at home in this city. I've now lived here more years than I lived in the city where I was born. That kind of makes my head explode if I think about it too much.

I am not a huge follower of professional sports but I do like baseball (probably has something to do with my brother playing all the way from Little League to American Legion ball and being brought to a lot of those games as a kid). So when the gang asked me if I wanted to go to a Phillies game for Stitch-n-Pitch, I was up for it. Due to logistical issues, the kids and I took the train into the city and I dropped them off at Tom's office. Then I took the Broad Street Line to Citizens Bank Park. I didn't even mind the freshly fecund smell of the subway, as it was philled with phellow Phillies phans. 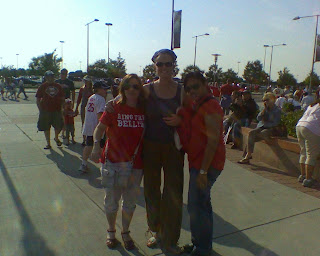 Liz, Sally & Aileen (Dorian not shown)
We met at the Mike Schmidt statue. It was sunny and spirits were high. We soon found Bridget and April, and the interpropagation of Facebook friends was complete in real life.

Citizens Bank Park is great. It was a beautiful night, perfect for a game. 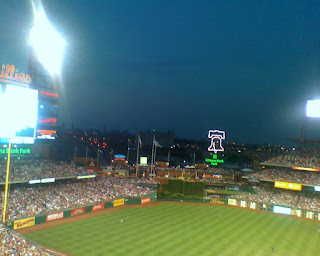 Some knitting actually got done: this is Liz, who had the good taste to bring her Rib Fantastic socks (designed by the inimitable Barb Brown, and featured in Knitting Socks With Handpainted Yarns). 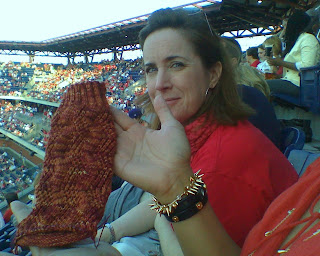 Dorian was also working on socks, two at a time -- and I'm pretty sure she learned from Melissa Morgan-Oakes' book, which is cool since I am MMO's Official Stalker. 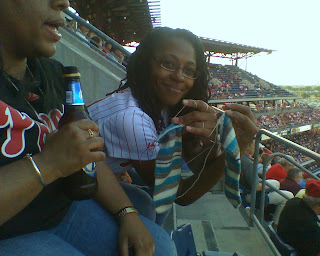 The usher or security guy or whatever you call him for our section was totally trying to bogart those socks.

We weren't drinking heavily (I stuck to bottled water, being a mild-mannered suburban housewife unused to public raucousness) but I have to say, we were a pretty wild bunch. You can imagine the kind of hijinx that Bridget and April got up to, 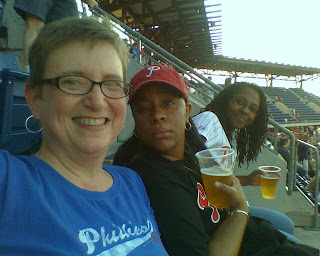 and Sally & Liz are incredible Phillies fans. They answered all the Phillies trivia questions in a heartbeat and knew all the right things to yell at the appropriate time. (Bridge, April and I supplemented with our own ripostes.) 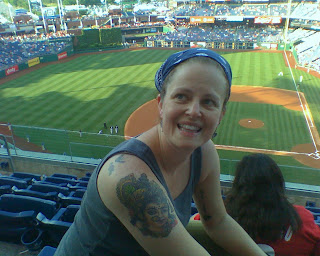 At one point, the usher guy came over and told us that "there's one group in every game" and we were it. I assume he meant "one group full of beautiful, exceptionally charismatic women" rather than "one group consisting of water-swilling miscreants causing a ruckus." Maybe it had to do with the full moon? 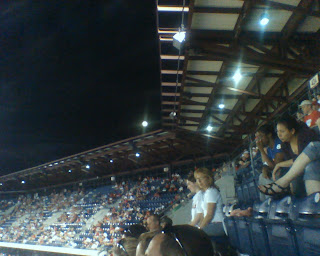 middle of the photo, peeking over the top of the stadium = full moon
As if it were not enough to have such amazing women to pal around with, we were extra lucky in that the Phillies pulled the game out in the last couple of innings. After being down two runs for a while, they tied the game in the bottom of the ninth, and then with two outs, Carlos Ruiz brought home the winning runs in the 10th inning.

It couldn't have been more fun! I hope we can repeat next year. (P.S. I think Aileen is in the picture with April. I think Dorian is the one who's story about her friend made you lose it.)

I'm glad I took my knitting, but if I ever want to actually get any knitting done, I'll have to go to the game with boring people ...

Just for the record: I was drinking beer.

I have been (mercilessly) corrected on FB about the identity of the two lovely and fun ladies I met for the first time last night. Mea culpa.

That sounds like a really good time, except for the water. I'm a beer-at-the-ball game kind of woman!

That sounds like so much fun! I love baseball, having grown up attending my brother's little league games, too. Some future year I'm coming down to Philly to hang out with you all, though I require beer at a game.

thank you for letting me live my baseball life vicariously thru your pictures! and I never drink beer. now frozen lemonade...OH YEAH!

I missed you, A-M. xoxoxo