I first discovered Stitches East when it was held in Valley Forge, just five minutes from my house. I have very vivid memories of attending about 15 years ago, when I was very pregnant with my oldest kid and wandered around buying baby kits to knit. He's almost 14 now, and it seems unbelievable that I've been going to Stitches East for so many years. I followed it to Atlantic City and Baltimore, but I haven't been there since the show moved to Hartford so it was great fun to be asked to teach there this fall. 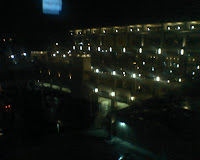 View of Hartford from my hotel room
It took about four and a half hours to make it from my house to the hotel/convention center, and it was teeming with rain for much of the way -- very stressful. It was a relief to check into the hotel and have a quiet night of watching bad teevee and knitting before the show began. Thursday was jam-packed. I attended the Teachers A La Carte luncheon, which was described to me as "speed dating for teachers." We started out at a lunch table full of students, and as they had lunch, we had about five minutes to introduce ourselves and tell about our classes. Then we moved to the next table, and so on. It was surprisingly grueling but I did get to meet some lovely people, including a bunch of women who were from northeastern Pennsylvania and couldn't believe I grew up in Wilkes-Barre. 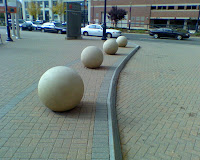 Outside the hotel
Thursday afternoon was my first class and it was full of great students. I had dinner that night with lace goddess Brooke Nico, and my second class was bright and early Friday morning. It was another enjoyable class full of great students but since my Friday afternoonwas free, I decided to use it to take a quick whirl around the show floor and then nap. (Teaching takes a tremendous amount of energy out of me and leaves me feeling zombified.) By this time, my roommate Melissa Morgan-Oakes had arrived and so we were able to have dinner together Friday night, thus alleviating any need for me to lurk in the shrubbery with night-vision goggles. (By the way, it has come to my attention that MMO is claiming that she is missing some underwear. I am most certainly not wearing it on my head right now, so please put that thought out of your mind immediately.) 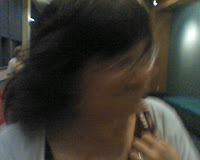 Stalkery of MMO
My last class was Saturday morning and it was my favorite one to teach: Yarn Substitution Made Easy. My class was bright and eager and enthusiastic, and we had a great conversation about the relatively new square-shaped knitting needles vs. round. (Consensus was that it was quite common to find that one's gauge was a bit looser on the square needles compared to the same size in traditional round shape.) The best part for me was that one of the students in the class was a knitter who'd taken a class with me before; nothing's more rewarding than someone willing to come back and take a second class with the same teacher. 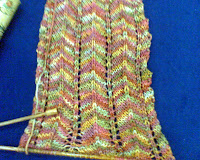 Marie even brought a scarf she was knitting in some Black Bunny yarn -- my cell phone photo doesn't do it justice, but it is so fun to see BBF yarn knit up, and Marie was doing a fabulous job with the scarf.
Saturday afternoon was a real treat for me. I got picked up outside the hotel by my pal Kristi and she and her wife Donna and doggie Ripley took me away from the knitting world into the world of Mark Twain. I had not realized that Mark Twain lived for many years in Hartford, and we went to visit the Mark Twain House and Museum. It was just five or ten minutes away from the Convention Center but a world away in spirit. 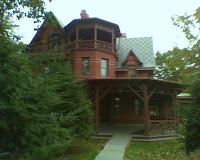 View of Mark Twain House
The house itself was big and beautiful. I guess you could call it Victorian or Gilded Age, but it also had a sort of craftsman feel about it -- lots of wood, and stenciling everywhere. There were balconies, a glassed conservatory, and amazing construction details. Our tour guide knew an incredible amount about Mark Twain (for example, he could rattle off factoids like "The family had 11 cats during the 18 years that they lived in this house" and other details that made the family come alive). 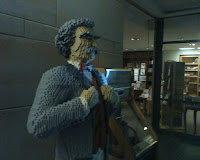 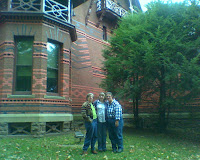 Donna, me & Kristi
I got back to the hotel in time to chill for a little while and then attend the student banquet. I could not believe my eyes when Lily Chin entered the room wearing an entire Mary Poppins ensemble -- including crocheted hat and long coat, knitted skirt, carpetbag and even a black umbrella with a light-up handle. She kept going around saying that she was "practically perfect in every way."
Once again I had the pleasure of hanging with Brooke Nico and we met some lovely students at our table (several of whom had taken classes with Brooke over the previous days). 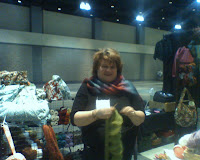 Linda Pratt demonstrates the Kid Silk Creation scarf kits
After chatting with my students about square knitting needles, I had to stop at the WEBS booth before I left so I could try a pair. (I'll let you know what I think....) The show floor seemed well-populated (a few vendors were missing due to overlap with the SAFF show) and I got a chance to see some of my favorite fiber folks, including the Elkins, Linda Pratt from Westminster Fibers, and Michael DelVecchio of Universal Yarns. I got to meet Lisa Souza in person (we've been conducting a shameless Facebook correspondence but haven't actually met in person) and enjoyed poking around and seeing what was new in the knitting world.
I will freely confess that after being away from my family for four days, I was very happy to get back on the road Sunday morning and head for home. It was a great trip and I returned home, as I usually do after a teaching gig, both exhausted and energized. If this blog post sounds a little disjointed, it's probably because I am still taking in all the new people I met and the things I saw....
Now it's back to the massive to-do list that was waiting for me. At the top of the list: Halloween costumes.
Posted by Carol at 7:38 AM

I'm with square needles the way some people are with the purl bumps in handknit socks bothering the bottoms of their feet. I tried them. I have a set of dpns, but they hurt my fingers, so whatever wrist-restorative superpowers they have are negated by the finger-hurting superevil.

It's funny: in a class of 18 or 20, about a third were firmly in favor of them and a third were meh, and a third hadn't tried them. I also had a divergence of opinion when it came to the teeny tiny circulars that some people use for socks (8" or 9" inch circumference, Clover makes some). Some people said "they hurt my hands and I can't use them" and others said "I love them!"

Carol...it was great to see you and take your class, and my scarf and I thank you for the shout-out. Thanks to my class with Lace Goddess Brooke, I was even able to fix two screw-ups in the scarf while knit-gabbing all weekend--you knitting teachers really rock. I'll send you a picture of the completed little beauty soon. See you in NYC in Jan!

Regarding the Lego Mark Twain: The US headquarters of Lego is a few miles up the highway from Hartford, so that's the (very odd) connection., if you were wondering.