We board the Rosie's bus and are on the road to Maryland promptly at 7:30 a.m. Our driver is Karl, a friendly guy (too friendly? you decide: was it necessary for him to share the anecdote that involved him looking down into the car next to his bus, to see the driver getting a blow job from his girlfriend?) who asked us, with great curiosity, just where we were going. So we explained, or tried to explain, Maryland Sheep and Wool to him. He immediately got it: "So this is like an amusement park for knitters?" 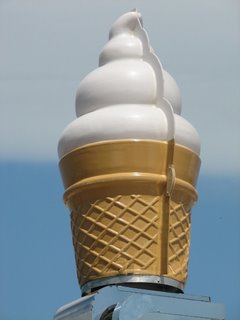 We also explained to Karl about our fanatical interest in knitting. He immediately got that, too: "My mother's a knitter." He told us about the blankets and throws she likes to knit and we offered to take her along next year.

My seatmate was Allison, who does lots of great p.r. work for Rosie's. 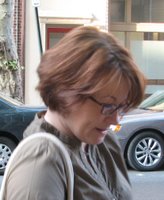 We laughed the whole way down and the whole way back, so I felt like I hit the bus lottery. We were ersatz bus captains, which required lots of talking on the loudspeaker and some attempt to keep track of who was on our bus. We had received strict instructions to leave on time and wait for no one, and to my chagrin, we did have one rider who was late. We left without her. Moral of the story: Don't fuck with the bus captains. (Fear not, the second Rosie's bus left half an hour later and she was on that one.)

I'll give you some more detail about my take on the festival in my next post. Today I'm going to 'fess up and show you my purchases.

I skipped the Koigu miniskeins booth. I know, but when I saw this, 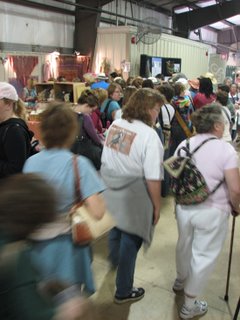 the donnybrook that had already broken out at the stand before 10:00 a.m., I just couldn't deal. I heard that there was already a line at the booth before 8 a.m. I guess I'm a little spoiled: Rosie's has such a great selection of Koigu that I feel like I don't need to elbow my way through the line.

My personal purchases were actually few and far between this year. I thought about buying some patterns at one of the big retailers' booths, and even went so far as to pick some out, but the line was so long that I just didn't have the patience. I did make a beeline for Spirit Trail, a wonderful dyer who I first encountered as a poster on Knitter's Review, and bought the rose silk-wool blend: 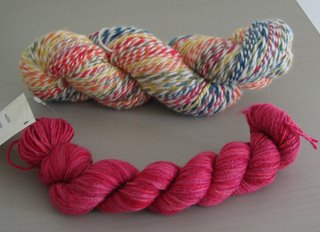 The multicolored yarn, from a different stand, the name of which I forget, is part angora and handspun. I knew my oldest kid would love the rainbow effect -- he's a sucker for multicolors and barber-pole stripes -- and sure enough, he was happy when I showed it to him and offered to make him a hat. 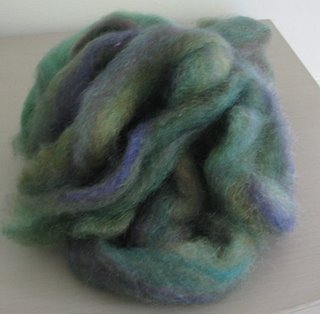 and a skein of their wool-silk blend (can you tell that half wool/half silk is my all-time favorite fiber?) which I swatched today. I'm going to make wristwarmers, of which I only have a single pair (and I never wove in the ends on that pair).

I did find my soy/polypropylene yarn (the color selection was so-so).

The rest of what I bought is Black Bunny-related: a few skeins of undyed yarn and some roving, from smaller places and different breeds of sheep. Look for some of them on my Etsy shop in coming weeks. 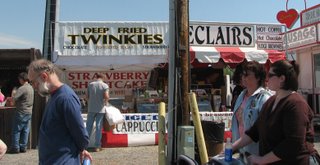 basically looks like a corn dog. I was not brave enough to taste one, nor did I indulge in the deep-fried Oreos.

I did a lot of photographing this year, and would have liked to do more, but unfortunately, my camera's memory card filled up before the end of the day. I'm used to deleting photo files on my computer, after I've saved what I want to keep to my hard drive, so I was leery about trying to delete old files in the frenzy that was Maryland. I had visions of accidentally deleting everything on the camera. So my photojournalism stops about halfway through the day.

Luckily, I went through the prize-winners' building early in the day. This is one my favorite parts of the festival. There's always something interesting, beautiful or even a little odd to inspire me. This 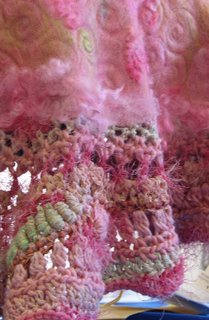 is an attempt to get the flavor of a multifiber, multitechnique shawl or capelette; it had some felting, some crochet and God knows what else. Felting, needlefelting and the use of floaty fabrics seemed popular this year in the prizewinner's building. I don't know if there were a lot of winners that used these techniques, or if I just noticed them for the first time.

In the beautiful category, I saw this great fair isle children's vest (I think it's a Dale pattern but an original colorway) and was struck by how lovely both the knitting and the color choices were. 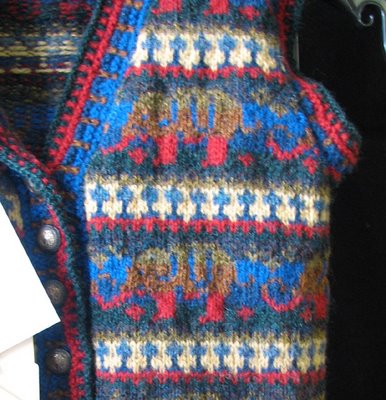 In the offbeat category falls this felted bag (it's a fishbowl! it's a purse! it's both!) 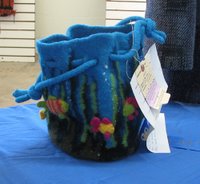 and -- brace yourselves -- this Cabbage-Patch-meets-Chuckie doll that haunted my dreams Saturday night: 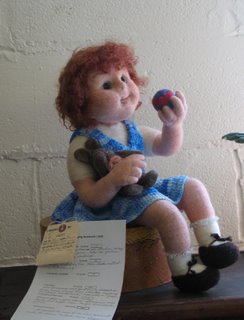 Finally, in the inspiring category, some lovely handspun (which my photograph doesn't adequately capture): 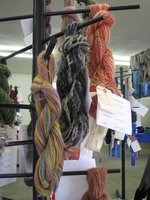 These hanks were probably done by some six-year-old Amish girl but I didn't want to depress myself by finding out so I didn't read the tags. More impressions next post (can you tell I experienced sensory overload?) but for now, I leave you with this lovely shot in honor of Ms. Dolores Van Hoofen: 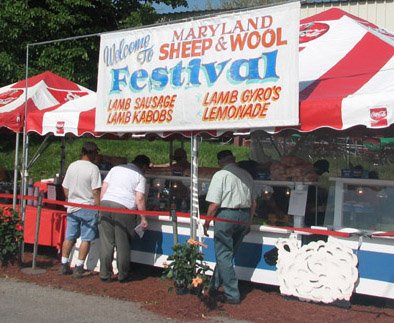 Shouldn't that last sign read 'Lambonade'? Yuk yuk. And then there's the apostrophe! Thanks for a great report. One year I'll be there.

I knew a lady who made dolls like the "chucky" in your pic. Only she made them life size and had them sitting around her living room. It was pretty spooky going there for a cup of coffee.
I was wishing I had gotten to go to this bash, now I really really want to be there.
Great job on the reporting, and congrats on your business doing so well.
Barb B.

the multi-color angora is by Jamie Harmon, i'm sure, i bought some last year at both MDSW and rhinebeck. lovely stuff isn't it! :)

You are just too cute.
You know that, dontchyis?

Being an agent provocateur, eh? I can only imagine what Dolores is going to have to say about that last photo.

Oh, and now that you've piqued my interest (and that of a few others), I'm off to Knit One in the morning after work (only 14 miles!) to try out some Wick for myself. It's research, dontcha know.

Damn-envious as hell, Caro. Looks like on hell of a time.
xo,
L.

ALL the Koigu was gone by Sunday morning. Saturday was pretty much a "feeding frenzy"- by 4ish everyone I saw had very dazed expressions on their faces. I think I just saw more from your pics than I actually saw the whole weekend- thanks! Now waiting for chapter 2.

The elephant vest is an Alice Starmore pattern. From The Children's Collection book.

Thanks, Anonymous. Geez, better start collecting for my copyright infringement lawsuit. Contribute to a legal defense fund, anyone?

Pretty yarns. Nice inspirational pix too. Too bad one of them is going to land you in the pokey (presumably.).

Carolyn is right- the mulitcolor angora is from Jamie Harmon of Jericho, Vt. While I was paying for my skeins (for grandchildren hats) my sister picked up Jamie's brochure with some nice color pics in it. Thanks for the pics- I took my camera but thengot so caught up in looking that I never used it.

Malutka, we won't tell Alice about the elephant photo if you get rid of that horrid doll right now.
It's giving me the eehees.

LOVE the angora and handspun rainbow yarn... and that vest is simply beautiful. I am not confident with Fair Isle in the least and in awe of it.
That is one friggin' big ice cream. Even I couldn't finish that sucker!

Great pics - that's me in the Koigu shot waiting (and waiting) in line - red shirt....