Today I learned that I have Lyme Disease. Don't worry; this blog isn't going to turn into Pityparty.blogspot.com nor am I going to publish pictures of my bull's-eye rash. [Especially since it covers part of my left breast.] I was bitten by a tick about three weeks ago, but didn't recognize it as such: I thought I was brushing off a fuzzy or piece of dirt. It wasn't until I developed a rash that kept expanding, and didn't respond to ordinary measures like hydrocortisone cream that I made the connection. So I may be taking it a little easy the next few weeks. I've got thirty days of antibiotics and I hope that will take care of this. If I post a little less often, well, I hope y'all will get over it.

In other news... yesterday was the local Memorial Day parade. You may have figured out by now that I have a streak of corny a mile long inside me, and I love these old-fashioned holiday parades. My oldest marched with the Little League, 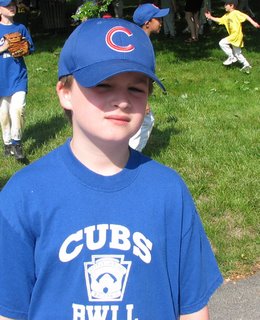 in between a bus full of [insert current politically correct word for retarded here] Boy Scouts and the local historical society. Check out the covered wagon; pretty cool, eh? 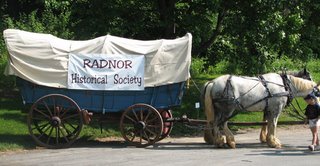 And don't forget the handy-dandy Minuteman, while you're at it. 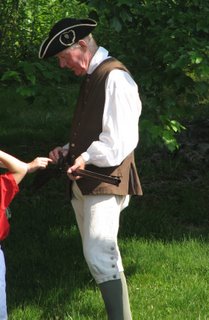 Of course, after half an hour of standing in the sun waiting to march, my kid's patience was at a low ebb and we bailed a little ways into it, as soon as we saw Tom and the twins and Grandpop at the side of the road. 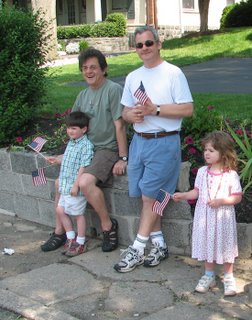 We sat with them and watched the giant watering can floats (on display, for some inexplicable reason, at a local arboretum) 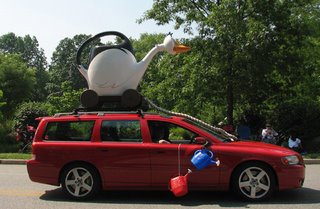 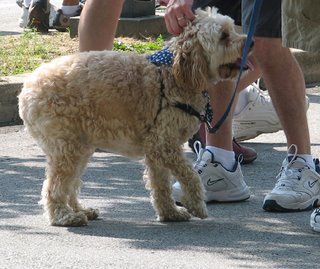 and the antique cars driven by equally antique veterans. (I bonded with a guy who flew B-17s, proudly telling him my great-uncle flew in one, too.) We snickered meanly at the guy who marched in the parade with a pink CareBears backpack: 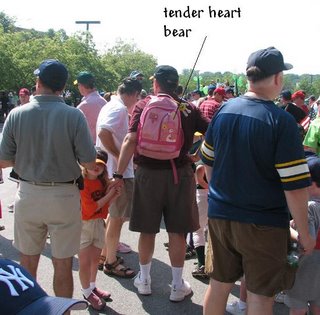 I even got to marvel at the attire of some fourteen-year-olds, whose asses were covered, barely, by no more than six inches of fabric in their Daisy Duke shorts. What were their mothers thinking?
Posted by Carol at 12:55 PM

Sorry to hear about the Lyme Disease. Glad you have it under control with the antibiotics. Scary stuff, though.

HA HA! I love the guy with the care bears backpack!!!!

Ugh - that stinks about the Lyme - Not that it's a comparison, but my dog got it last year, and the antibiotics helped TONS!

Oh, for the days when my ass was small enough that 6 inches of fabric might half-decently cover it.

Sorry about the lyme disease. That sucks!

I think I finally have all the supplies I needed to dye your yarn, so that's my big plan for this coming weekend. If I'm fast enough, you can knit some socks during your recovery. :)

I live in a wooded area (on 3 sides of us) so I check my kids daily for ticks. Unfortunately even daily checks don't always catch those pesky critters. Thank goodness the antibiotics work and for the most part there are no lasting effects of Lyme disease. As for the daisy duke shorts......I saw 3 5th graders at my son's school wearing them. Actually one was wearing a mini skirt but she had a belly baring halter top on, a push-up bra (I hope, because if not then she is going to have some serious back issues as she develops.....they were that big!) and a pair of platform sandals (at least 4 inches high) and stockings. I was shocked to say the least. I was surprised that she wasn't wearing any make-up given her outfit. I wasn't the only one who noticed, most of the other mother's were commenting on her attire also. Supposedly there is a dress code at my son's school......yeah right. My older son is 14 and the girls at the middle school dress the same way. What kind of parents let there young daughters dress like prostitutes? I have 3 sons and a daughter. My sons are much older (14 years old, 11 years old and 8 years old) than my 2 year old daughter. She won't ever be like the girls of today.....she has, in essence, 4 Daddys! I do feel slightly bad that it in the future having 3 older brothers might cramp her style a bit....but,oh well!

That sucks about the Lyme's disease! Hopefully, it will clear up quickly.

The parade sounds like fun. It's not just that guy; anyone over 12 with a care bear backpack deserves to be mocked.

What a fun parade! (and sometimes the side-line snickering is the best part of those things)

Hope your symptons aren't too terrible- I reckon we'll let ya slide for that. Yes, 'tis the season to store all found ticks in little jars of alcohol for 3 weeks...(do we still have to do that- that's what the first aid pages used to say?) Anyway- feel better!

Oh, that sucks about Lymes, I'm sorry. I hope your feeling OK.

What's the deal with the friggin'ticks in this area?? I was chomped by two last year, and chomped by one last year. Luckily they where the bigger dog ticks that are not supposed to carry Lyme's. They always seem to get me in the scalp too where they are hard to see until it's too late, and hard to examine the bite. I love animals but man, do these things have to exist?

Here's wishing you a speedy recovery!

Sorry about the Lyme--as an NJ resident who geocaches (www.geocaching.com if you don't know), ticks are a regular visitor. So far, I have been lucky, but my husband sees the Dr. on Monday for what we figure is Lyme. Hang in there....

I suspect that the Mom's were thinking--I have plenty of real issues to fight with my kid over, clothing will not be one of them. It might be barely, but the naughty bits were covered. Given that today a kid is as likely to take fashion tips from Paris Hilton, that is pretty good. I say, instead of worrying about what they wear, let's be happy they are comfortable with their bodies and--if the Mom's are any good--their sexuality. It is a HUGE part of the world they live in.

Michelene, do you want to take this one?

Oh no - that sucks!! Here's wishing you a speedy and long-lasting recovery!

I can't think of anytime that 6" of fabric would cover my ass--probably before I had any real memory, in fact.

Get well soon! I'll survive the scarcity of posts somehow!

Lyme Disease! Yikes. I hope you are better soon... Glad to hear you all had so much fun at the parade.

Ah, Cynthia, how I yawn and swoon from the "everything is everything" philosophy.
Oh, well, a few hits of meth...it could be heroin...
Jeez, the kid has a knife...it could be a gun...

Yay dad! Takes his little girl to the parade and willingly shoulders her carebear backpack.

I think that I don't want my daughter having a sexuality at that age, let alone feeling comfortable with it. I'm only half-kidding. I think parents owe it to their kids to draw some lines; for me, revealing clothing at that age will be one of the lines. Our society is sexualizing girls at a younger and younger age. I don't plan to help.

Lyme. Damn. Not that you don't know this already obvioulsy, but I hear lots of rest is a very good thing!!

I'm not a big fan of wallowing either, but it does occaisionally have its merits. If you ever find that you need a place to squat on a pity-pot from time to time, I've got one you can borrow, so feel free to pop me a note. Following the laws of karma, I due for giving support ;-)

Love the parade photos. I wonder if the guy with the backpack ever gets stuck carrying his wife's purse, too...

I bet he carries her tampons in a little Tampex cozy for her, too.
Poor chap. I'm sure he's perfectly nice, and he's not wearing black dress socks with sandals, either, so he's got that in his favor.

So sorry to hear about the Lyme Disease - awful - I hope you're feeling back up to snuff soon.

I think that dad is awesome!!

Sounds just like my town's Memorial Day parade. I go every year and it's probably corny but so am I.

I'm from Ct where Lyme Disease first started. Those little deer tics are so tiny it's hard to see what's biting you.

So glad you caught it so early. My mom has chronic Lyme disease - we think she had it for decades before being diagnosed. 3 weeks is good!

One of my techs just got Lyme, too, so you're in good company. A bit of trivia: Dogs do not get a bullseye rash with Lyme. This time of year I see a lot of dog owners freaking out over their dog's blackfly bites - which do have a bullseye appearance.

Sorry to hear about your Lyme diagnosis - I had it undetected for 6 years, and it did all kinds of damage, so I'm glad to hear you caught it early. I agree with other comments here - I will not dress my daughters, ages 14, 9 and 4, as grown-ups. They're not. They're girls, two of them young girls, and should be dressed accordingly. The 14-year old wouldn't dress that way on a bet, anyway (grin).

"bet he carries her tampons in a little Tampex cozy for her, too."

What? It's your picture - take a closer look. He's quite clearly holding the hand of a very little girl who appears to be about five. He has her back pack slung on one shoulder. He is, by all (admittedly slim) appearances, a good dad. Why mock or suggest he's whipped in some way?

Lighten up, Anonymous. I was joking in response to the commenter who (also jokingly) said that maybe he carried his wife's purse. And next time, have the balls to leave your name.