This is my great-uncle who, like 68.45 percent of the men in my family, is named Francis.

I've never met him, at least not since I was old enough to remember, and although he is the brother of my paternal grandfather (and boy, does he look like my grandfather), my dad hasn't spoken to him in years. I learned about Francis when I started researching my family's genealogy. Nothing like doing a Google search and coming up with a long-lost relative, particularly with an unusual ethnic name like mine, where you don't get a lot of hits.

My great-uncle Francis grew up in northeastern Pennsylvania, son of a coal miner, and ended up in the Army during World War II, like so many men of his generation. A member of the 303rd Bomb Group, he flew missions as part of the crew of a B-17 bomber. My father, who was a child at the time, vividly remembers that the plane's insignia had Bug Bunny on it (which is kind of odd, since I've always loved Bugs Bunny). My dad was right:

This is a photo of the nose art from the plane Francis flew on.

On January 23, 1943, Francis' plane took off on a mission, flying -- along with twenty other B-17s -- from England to an area over France. Their targets were a port at Lorien and the U-boat pens near Brest. Before they could complete the mission, forty-odd enemy fighters appeared and opened fire. At the same time, more American planes, from a different bomb group, appeared over my great-uncle's squad, aiming for the same set of targets at Lorien and Brest. In the confusion and fire, five aircraft went down. My great-uncle's plane, named "Susfu," was one of them.

Two of the Susfu's crew were killed when the plane went down; two evaded capture by the occupying Germans; and the remainder, including my great-uncle, were able to avoid capture temporarily. Family lore says that Francis was sheltered by a local French family, but later someone informed on them. The head of the family was shot and my great-uncle was captured. Francis ended up in a Nazi stalag as a prisoner-of-war until the war ended, two years later.

I know very little about what kind of person my great-uncle is, but I know what it's like to be twenty years old and I can't imagine -- at that age or any age -- stepping up to the plate in a situation like WWII: adjusting to military life, learning how to serve as crew on a bomber jet, going abroad to fly missions over enemy country, the terror and adrenaline that he must have felt when his plane took enemy fire, what thoughts went through his head when he parachuted out over a France occupied by Nazis. I can't imagine surviving on the run, or the guilt he must have felt when the man who sheltered him was shot. I can't imagine being held prisoner in a stalag (although I suspect it wasn't anything like Hogan's Heroes) and then the disbelief and joy of liberation.

Tomorrow is Memorial Day, the day in which we are supposed to remember those men and women who have served our country throughout the years. So even though I've never my great-uncle Francis, and even though my father describes him as a crazy old bastard (his words), I respect Francis for helping to protect our country as he did and I thank him for all the sacrifices he made while doing it.

If you don't have a family member or friend serving in the military, but would like to reach out to a serviceperson stationed abroad, I urge you to visit AnySoldier.com. It's a grass-roots organization that provides contact information for Americans in all branches of the military so that ordinary citizens like you and I can send care packages. The website is cleverly set up to allow the soldiers to make specific requests and to post updates and photographs. You can search the profiles by keyword; I like to send packages to soldiers that share my kids' first names, or who are from the Philadelphia area. The most touching part is the number of soldiers who ask for things not for themselves, or even for those in their platoon or company, but for the impoverished citizens of the countries (particularly Iraq and Afghanistan) in which they are stationed. Please don't think you have to be a gung-ho military person or that you must agree with our government's decision to invade Iraq to participate; God knows I don't but when I look at these photos I am struck by how young these kids are, and how hellish their service must be.

Happy Memorial Day to you all. 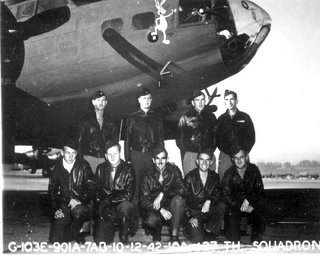 Especially you, Francis.
Posted by Carol at 3:31 PM

Thanks for that. I was just driving home from work thinking about my grandfather, who also served in WW II and was a career Air Force serviceman. He passed away almost 3 years ago, but he's still never far from any of us. He was a good man, and his family all loved him dearly. He loved military documentaries, but he never really talked to any of us - not even my grandmother - about what he went through flying bomber runs. I suspect it was the sort of thing no person - young or old - should have to see.

Do you suppose part of why he was a crazy old bastard was what he had gone through during the war? Great story.

Absolutely, Kathy. After the war, he and his brother (who interestingly did not fare so heroically in the war; he was dishonorably discharged for what my dad says was a little too much entreprenurial spirit with the stuff at the PX) married sisters and lived in a twin on a hill. He still lives in his half, though his wife is now dead, and his brother's wife still lives in the other side, though her husband's gone. As far as we know, they are still there, though very, very old. I've tried to contact them but never gotten any response. I would love to pick his brain about his father, who was the first Sulcoski in my family to come over from near Plock, Poland. Alas, that's what happens to a bunch of hard-headed Polacks with PTSD...

Oh Carol...
I also thought what Kathy said. Thanks for the link to AnySoldier.

Carol, that is a wonderful story! Thank you for sharing it, and thank you for the link. I will be heading over there next...

One good thing that the Iraq war has done is bring more attention to the purpose of Memorial Day. Thanks for your story.

Thanks for the lovely post. My nephew is on Tour #2 in Iraq (101st Airborne Black Hawk pilot. My father was a US Army Ranger killed near Saigon (shot down)in March 1962 enroute to Vietnam. Memorial Day is not just a 3 day weekend of shopping and cookouts for me. Thanks.